In His Native Venice, Donghia CEO Andrea Rubelli and His Family Practice the Art of Living in an Ancient Palazzo Near the Grand Canal 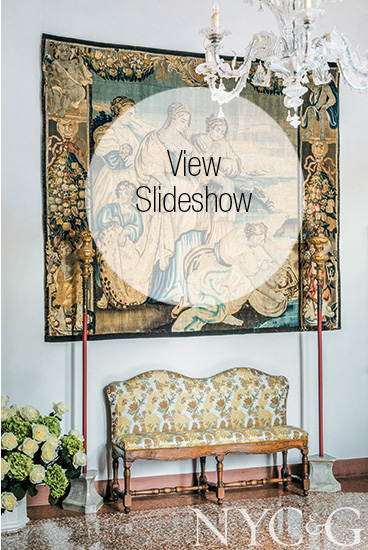 When you descend from a family whose name has been identified with luxury Venetian silks, velvets, and damasks for five generations, where else would you live but in one of the exotic floating city’s most venerable palazzi? And so it is with Andrea Rubelli, who resides with his wife, Sandrina, and their son, Leonardo, in a building near the Grand Canal that was old before Columbus arrived in the Americas.

“The style is early Gothic,” says Andrea, who runs the historic Rubelli firm alongside his father, Alessandro, and one of his two brothers, Nicolò Rubelli. “Our architect estimates that it was built in the 14th century, probably around 1370.” Even more remarkable is that many of the home’s architectural elements—from the façade, with its galleries of arched windows, to the ceiling beams and terrazzo floors—are original.

The Rubellis’ palazzo has been in the family since great-great-grandfather Lorenzo inherited it from his second wife. The Rubelli home, like the company he runs, Andrea says, weaves “the warp of tradition with the weft of innovation,” especially since Rubelli acquired Donghia, the American furniture, textile, and lighting company, in 2005.

Predictably enough, the 650-year-old building has undergone some changes over the years, many of them after a fire claimed its top floor in the 1950s. Since the 1990s, the upper two levels have been transformed during a series of three renovations into two duplex apartments. Andrea, Sandrina, and Leonardo live in one, and Andrea’s sister, Matilde, and her family live in the other.

While renovating is often a challenge even in the average Manhattan co-op, nothing matches a remodel in a building that was purposely built “off plumb” by medieval architects who understood that a structure standing on wooden stilts in water needed to be flexible to survive. “A room in a Venetian palazzo can be ten inches off from one side to another,” says Andrea, “which means you don’t even bother to take measurements—they can change between the time you take them and when you are ready to do the work. Everything has to be custom in a Venetian renovation, and everything has to be made on site.”

Despite the many recent revisions, the palazzo retains its original, and typical, comportment of rooms. An arrival hall lies on the ground, or water level, replete with original 14th-century pavers. It’s home to a “new” staircase, which in Venetian terms “means that it dates from the Renaissance,” Sandrina says. This entryway also doubles as the home to the family’s lagoon craft: Andrea’s pride and joy, a custom-built racing puparin and a smaller mascareta.

Immediately above is the floor known as the piano nobile, or “noble floor” in English. “In the old days,” explains Sandrina, who comes from Quercianella, a small seaside town south of Pisa, “these palazzi were used for business as well as residences. Traders would bring their wares into the entry hall, and if the merchant owner of the home was impressed, he would invite the trader upstairs into the public reception rooms.” The 21st-century Rubellis use the so-called state apartments in the palazzo for business, charity, and personal events—including their own wedding reception.

Above the formal piano nobile are two floors of private apartments and a roof deck with views of the bell tower of the 600-year-old Santo Stefano church. It also offers a glimpse of La Fenice opera house, for which the Rubelli firm provided the wall fabrics both for the 1837 reconstruction and the restoration that followed the devastating 1996 fire. (The Rubelli textile archive, housed in another Renaissance Venetian landmark, the Palazzo Corner Spinelli, is open to the public by appointment.)

“When we were decorating our home,” says Sandrina, “we kept to certain themes. One, of course, is the sea. And another is the great cultural life that the city has known throughout its history. Also, I love books, so I put bookshelves in every room. At the entry to the private apartments, there’s even a closet with bookshelf-print paper by Brunschwig & Fils. It was a wedding gift from my brother-in-law Nicolò.”

The Rubellis furnished the palazzo with family antiques dating back centuries, as well as an art collection that ranges from the Renaissance to the 20th century. A key piece is an odd little chair that sits at the foot of the stairs to the family’s private quarters. “I found it on a trip to Portugal,” says Sandrina. “We were traveling between Lisbon and Sintra, and I had to stop and go for a walk in the woods to see where Lord Byron used to ride his horses. And right in the middle of the woods was an antiques shop with this curious little chair. It is a cello player’s chair from the 1700s, and when the dealer acquired it, it had been covered in a Rubelli fabric. I took it home on the plane as carry-on luggage because I wasn’t about to let it out of my sight.”

Most of the fabrics in the palazzo are by Rubelli, and a few others by Donghia, like the deep-magenta striped draperies in the piano nobile sitting room. The “tablecloth” in that room is a section of the stage curtain Rubelli made for the restoration of the Bolshoi Theatre in Moscow. Made of silk and 24-karat gold thread, the entire finished curtain weighed some 30 tons.

Donghia fabric makes its appearance on the chairs in the red dining library, as the Rubellis call it. “It was supposed to be a straightforward dining room, but I couldn’t resist making it into a dual-purpose space,” says Sandrina. Both the chairs and the Donghia table were once in the Rubellis’ Manhattan apartment, but the table reminded Sandrina of the hull of a boat, so off to Venice it was shipped.

The native Italians actually met in New York City. Sandrina was on her way to a party on the top floor of a building and found herself stuck between floors in a tiny elevator with another woman. After 45 minutes trapped together—a nightmare for the claustrophobic Sandrina—the woman, who turned out to be the wife of Andrea’s best friend, said, “I have to introduce you to a friend of my husband.” The rest is Tuscan/Venetian amore.

Much of the decor, in fact, was chosen with a “Tuscany meets Venice” marriage in mind. The tablecloth on the roof terrace is “a typical linen from Tuscany,” says Sandrina, and the terra-cotta planters are Tuscan, too. “They’ve been making them in the same factory since the time of the Medicis,” adds Andrea.

“When I was deciding on colors,” says Sandrina, “I was thinking of the green of olive oil and the gold of the sunset.” Those colors are realized throughout the palazzo in rich Rubelli fabrics, like the gold silk on the walls, designed by Giò Ponti in the 1930s.

“It’s amazing, as you start to open up floors and walls, what you can see and learn about life in Venice over the centuries,” says Andrea, who did the upholstery in all the rooms. That means the water, too, and there’s no doubt that his prized possession is his custom-built mahogany puparin. “It’s not a gondola, as some people might think,” he instructs, “but another kind of Venetian boat. If a gondola is a Rolls-Royce, then the puparin is a Ferrari. It’s built for speed. I took the dimensions of the room, the front door, and the little plaza in front of the building and said to the designer [Venetian rowing champion Franco Crea], “Just make it fit.”

Sandrina’s favorite piece is the 18th-century secretary in the reading room. “It’s Tuscan,” she explains, “from Livorno, but inside the top of the desk is a model of a very Venetian Palladian house. It symbolizes our relationship and what I have tried to make our home into, a combination of my Tuscan roots and the Venice I have come to think of as my adopted home.”

“Interestingly,” Andrea points out, “the name of our palazzo is Pisani Rubelli. Pisani was a Venetian family who built our home, plus many other palazzi in Venice. They were originally from Pisa. It’s such a coincidence that Sandrina, who grew up near Pisa, came to live in it.”