In Pacific Heights, an Achromatic Palette Strikes the Right Balance 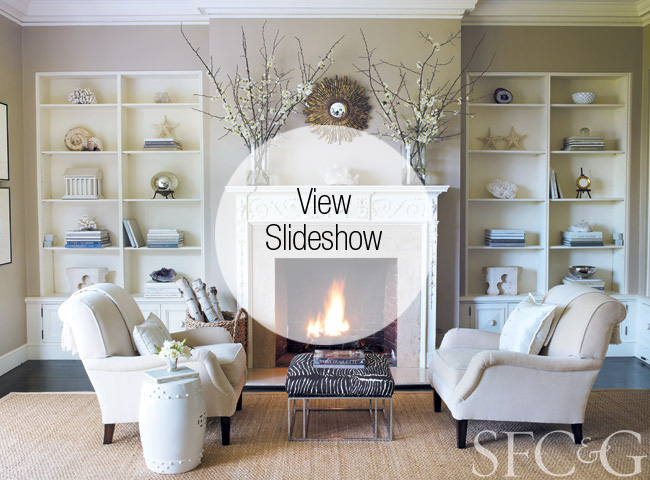 "Beige is Atmosphere. It’s ivory, it’s cream, it’s stone, it’s toast, it’s cappuccino. It’s well, it’s magic.” Though a phrase attributed to the legendary interior designer Albert Hadley, it might well have been said by designer Benjamin Dhong. “I never need a reason to design a neutral room,” says Dhong. “Layered, textural monochromes can be glorious and exciting. And unlike bold color, they’re never disconcerting; they never give me whiplash!”

Case in point is his harmonious design of a 1920s Pacific Heights house where barely perceptible shifts in the off-white palette unify the decor on all four floors and let the furnishings “sing together, like a choir,” says Dhong. “No single element upstages another, and people rather than objects are a room’s star components.” The milky palette also creates the perception of spaciousness: Elements visually float and, once in a while, a gilt or shiny surface satisfies a potential thirst for color.

Dhong’s first consultation with his clients centered around their need for a re-envisioned kitchen. Ever intuitive, he also suggested changes in other areas of the 4,000-square-foot Tudor revival, and he was hired on the spot. In the living room, his work resulted in equal measures of comfort, practicality and beauty. The logical move would have been to orient all the furnishings around the fireplace. But instead, Dhong created two seating areas—rooms within the room—and left the central axis open and gallery-like to accommodate a figurative sculpture by Dan Corbin. “Now there’s a sense of prevailing calm in this space. It’s peaceful and balanced,” he says. “It exudes a laid-back confidence.”

The Gustavian heyday of Swedish style is, without doubt, his greatest inspiration. “It interpreted the aristocratic aesthetic of the European courts in a restrained, informal way. It combined drama, elegance and humility at one and the same time,” he explains, “and that’s how I describe the core of my work.” The designer is also emphatic about not favoring one period of furnishings over another. “Purely modern can feel cold; purely vintage can feel nostalgic,” he says. “But juxtaposing the two leads to an appreciation of each one’s individual attributes. We’re all afraid to have bad taste, so we conform, and because we avoid making personal statements in our homes, we end up with very polite interiors. I like quirky mixes.” Examples of this include the Gothic spire he placed alongside a snowy Tizio lamp in the master bedroom; the faux bois wallpaper in the powder room that sidles up to a window shade’s Greek key pattern trim; and the dining room pillows made from 18th-century French embroidery peppered across a Room & Board banquette. Dhong’s enthusiasm for unexpected pairings also produces tablescapes where found objects edge up to rare artifacts. “Sometimes I’ll elevate the humble piece on a stand so it makes the precious piece feel attainable,” he says. “I gravitate toward that kind of contradiction.”

The designer puts a lot of thought into making his interiors feel spontaneous and unstudied. He chooses one piece for its clear drama; another for its unobtrusiveness and silence. “Maybe the sole purpose of something quiet is to let something else speak?” he continues. “I want people to stumble across things; to discover them as they wander through a house. So I’m always creating subtexts. We all lead these multifaceted, multidimensional lives—our homes should reflect that.”

A version of this article appeared in the September 2015 issue of San Francisco Cottages & Gardens with the headline: Pale Fire.