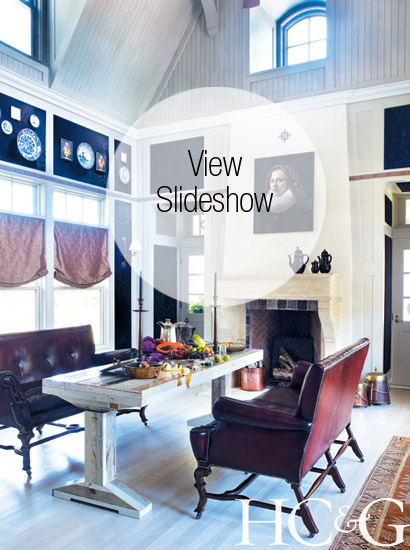 Long before she became an interior designer, Alexandra Loew made documentary films. But her career change—from working with footage to working with yardage—isn’t as radical as it might sound. That’s because both professions, when it comes to Loew, involve extensive research. As a filmmaker, she worked to find the best material to tell a story. As a designer, she does pretty much the same.

The beach house featured on these pages required all her storytelling talents—and then some. Custom-designed by architect Stuart Disston for the original owner ten years ago, the classic shingle-style house had good bones, but the finishes needed updating.

Initially, Loew’s clients told her, “Just paint it and buy some furniture.” But then the husband decided to redo the interiors as a gift to his wife, who has Dutch and Belgian roots. Soon “buy some furniture” translated to “travel with us to Europe,” where Loew and her clients drove through Belgium and the Netherlands, visiting dealers who worked out of castles and barns. One of those dealers sold them the handsome Hermès gate-leg table of brass, leather, and oak that now holds court in a corner of the living room.

But to Loew, turning a house into an homage meant more than simply shopping. Under her direction, nearly every surface of the sprawling home was transformed by artisans who, for instance, stenciled Flemish motifs (based on photographs Loew took in Europe) onto floorboards, beams, and rafters. Kitchen cabinets, which originally had too much sheen, were toned down with milky white paint. And the fireplace in the great room, previously covered in glass mosaics, was reclad in the kind of tortoiseshell tiles “that adorn the fireplaces of wood- and coal-fired farmhouses throughout the Belgian and Netherlandish countryside,” Loew says.

The designer’s research involved getting to know the clients as well as she knows the decorative arts. She designed and produced a special fabric depicting the wife’s heritage, including a family crest, renderings of an ancestral farm, and other personal vignettes, all realized with a sense of humor. The fabric covers several pieces in the conservatory and is affectionately known as “the family toile.”

Not every room got its own fabric, but Loew personalized each one, mixing traditional Dutch design elements and artworks that comment, sometimes ironically, on those same elements. Given the high and low perspectives on the Netherlandish traditions, she began calling the project Double Dutch.

Take the great room, where wall panels are upholstered in black mohair that has been gauffraged, a French technique of running fabric through a round steel drum that impresses a permanent pattern. “It’s a super-traditional decorator thing,” says Loew, who focused on the history of decoration as an architecture grad student at UCLA. But, she adds wittily, the panels are patterned “something like a Belgian waffle.” Hanging on the gauffraged walls are Delft plates and chargers, but the same room also contains contemporary, whimsical takes on Dutch-ness, like a scrap-wood table custom-made by Amsterdam artisan Piet Hein Eek. Hanging above the fireplace is a photograph by Hendrik Kerstens, capturing his daughter dressed as a Trappist nun with a napkin on her head and flexible ductwork as the “ruff” around her neck—a kind of lighthearted send-up of the Dutch masters. On the mantel stands a small collection of pottery from Namur, Belgium, the wife’s birthplace.

Perhaps the most striking artwork in the house is Tom Hunter’s The Art of Squatting, which reimagines Vermeer’s iconic The Art of Painting as a photograph staged in a London squat. Loew’s choice of the painting isn’t about rejecting tradition, but rather about looking at it from a new perspective.

The dining room is one of the most sparely furnished rooms—but it’s not without its own Double Dutch components. Loew started by purchasing a trio of Sharon Core photographs depicting heirloom varietal flowers, which the artist cultivated herself to duplicate arrangements seen in the still-life paintings of Jan Brueghel the Elder. Then, inspired by the colors in the photos (as well as a love for the decorating genius John Saladino), Loew chose a lavender pigment for the coffered ceiling. Throughout the house, she employed jewel tones, some derived from a visit to Amsterdam’s Rijksmuseum, where she and her clients studied the colors and textures of paintings like Rembrandt’s The Night Watch. They wanted the house to feel welcoming 12 months a year, says Loew, explaining that she would have picked lighter shades for a house used only in the summer.

In the octagonal study, the walls were originally covered in a cheap mahogany veneer that looked like a law office from the ’70s, says Loew, who had them painted to resemble cerused oak. Furthering the transformation of the room, she installed an Art Deco–style mirror that she found at a Paris flea market: The verre églomisé piece depicts “frolicking young warriors” who bring life to a once-stuffy space. “It turns out to be a pretty significant mirror by [French decorator] Max Ingrand,” says Loew, whose focus nevertheless went far beyond items with provenance. Even the most mundane components received her attention. Old-school push-button switches with forged brass plates were engineered to work with the newest electronics. Cloverleaf-pattern metal grilles were inserted into otherwise plain doors.

Perhaps the only thing left “un-Dutched” is the house’s shingle-style exterior. It couldn’t be more suggestive of a Hamptons getaway, although the windows, covered with panels of antique Belgian lace bought in Namur, lend a sly suggestion to the Double Dutch treat that lies within—a place where the Low Countries have evolved into a new republic called the Loew Countries.

A version of this article appeared in the July 15 2015 issue of Hamptons Cottages & Gardens with the headline: Dutch Treat.

USC Puts President's Estate on the Market for $24.5M

Used as the president's home since 1979, this monumental listing is no Trojan horse.