In the West Village, Neighborly Relations Are a Little Strained 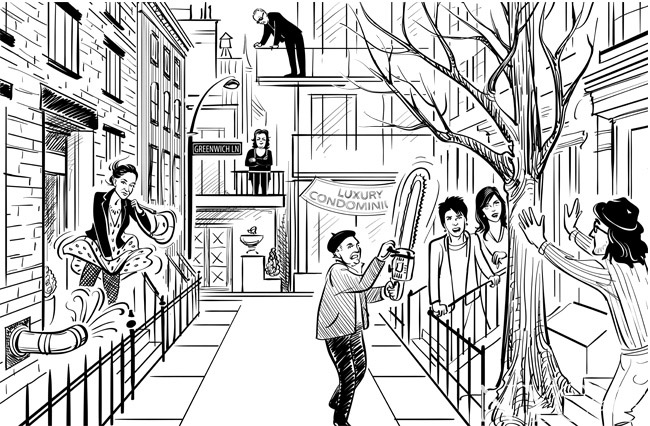 In the West Village, neighborly relations are a little strained these days, especially when it comes to boldfaced names. Gary and Addie Tomei, parents of Oscar-winner Marisa Tomei, are suing their West 13th Street neighbor Sean Lennon, son of John and Yoko, over a tree on his $9.5 million property, the roots of which have allegedly cracked the Tomeis’ stoop and even crept into their basement. The Tomeis want it cut down and turned into paper—to the tune of $10 million in damages, that is.

Nearby, fashion designer Cynthia Rowley has taken to some unwanted accessorizing: She’s being sued by her next-door neighbors for illegally installing venting pipes on their exterior walls, part of a $500,000 improvement project Rowley is completing on her 30 Perry Street townhouse, which she purchased for $2.495 million in 2004.

Rosie O’Donnell has been shedding a little weight lately, filing for divorce from her wife of two years and unloading her 3,200-square-foot duplex penthouse at 130 West 12th Street for $9 million, a $1 million boost from the $8 million she paid for it in 2012. Good timing, as her 400-square-foot terrace no longer has a view: It now faces a brick wall that’s part of the Rudin family’s new Greenwich Lane condo development—where Michael Kors is rumored to have gone into contract on a penthouse costing between $17 and $21 million. With interiors by designer Thomas O’Brien, the Greenwich Lane project should be ready by resort season 2016 and is already 75 percent sold.