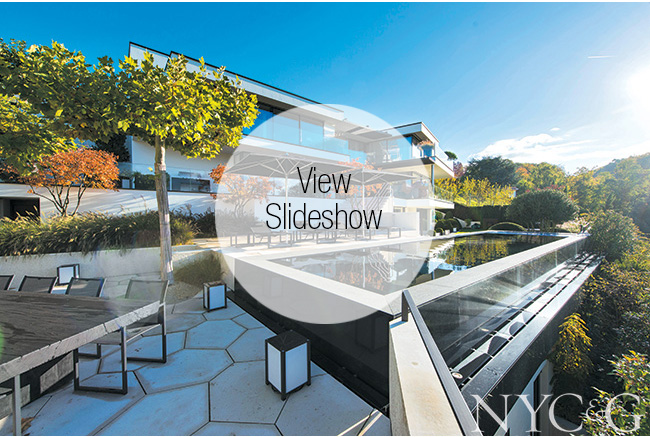 Tucked into a hillside with sweeping vistas of Lake Zürich and the Alps of Lucerne, this secluded residence in the tiny village of Erlenbach, Switzerland, literally opens up to the lush outdoors and is a water lover’s paradise. It makes sense, then, that its owner, an international executive whom everyone calls E. T., grew up near Europe’s biggest waterfall, Rhine Falls, about an hour’s drive away. “Once you’ve lived close to water and overlooked a lake, it’s very difficult to move away from it,” E. T. says. “It has a very calming effect.”

But after living with his family in two neighboring houses for years, E. T. felt it was time for something new. The solution: He tore down the two existing structures and built two nearly identical, environmentally friendly, high-tech homes on the same spot. One is for him and his wife, Renée, and the other for their son. Having lived in the brand-new digs for two years, E. T. is particularly smitten with “huge windows that open automatically and all kinds of fun gadgets—we don’t even have keys!”

Securing the houses into the steep hillside nearly 2,000 feet above the lake, however, was no small feat. Before construction could begin, 30 100-foot holes had to be drilled into the hill, then filled with concrete to create a foundation that would ensure the homes would stay put. “That was the biggest surprise,” recalls E. T. “I hadn’t planned on the process being so complex or complicated.” Under the guidance of Zürich architect Heinz Müller, solid concrete walls designed to last 200 years went up next, with the two houses forming an L-shaped compound centered around a seven-foot-deep lap and massage pool.

Once the structures were complete, E. T. and his wife turned to the decor. Renée, a graduate of Texas Christian University’s interior design program, “knows exactly what she wants,” says her husband, and was instrumental in creating the soothing, contemporary decorating scheme in both homes. Sumptuous swaths of Brazilian granite comprise the flooring, anchoring the decor throughout. E. T. made several visits to a stone and granite dealer in Verona, buying out its entire stock, after which he ordered more directly from Brazil. “It’s like nothing else in the world,” he says of the stone. “The surface isn’t shiny or rough, but it has the feel and touch of leather. It’s like a painting.”

Each house’s ground floor is outfitted with both a wine cellar and a fitness-and-wellness room complete with a sauna, steam bath, treadmill, Pilates Reformer, weights, and two huge dressing rooms. Four bedrooms with dark oak flooring make up the bulk of the second levels, while the kitchens, living rooms, movie rooms, and more are located up top.

While taking in the view of Lake Zürich from virtually every room is a reward in and of itself, nothing beats the vista from the luxurious gardens and multiple terraces, as well as the big ironwood table adjacent to the pool, which is perfect for summer parties. “The view from here is breathtaking,” E. T. says. “We can see all the way to the other side of the lake, and the water is always a different color depending on the time of day. There are boats and swans, and then at night all the churches surrounding the lake light up.” Things get particularly festive at Christmastime, when Renée spends two full days with an electrical engineer to create a winter wonderland of sparkling holiday lights.

It doesn’t hurt, either, that there are two master chefs on hand for entertaining purposes. “My son is a fantastic griller, and my wife is the best cook I know,” E. T. says. So whether the menu includes first-rate Texas steaks, Japanese soups and teriyaki, traditional Swiss cuisine, or chili con carne, the family’s guests are guaranteed to leave well sated and bowled over by the view. “It’s something very special, to be able to enjoy living on a lake. It’s like constantly being on vacation.”