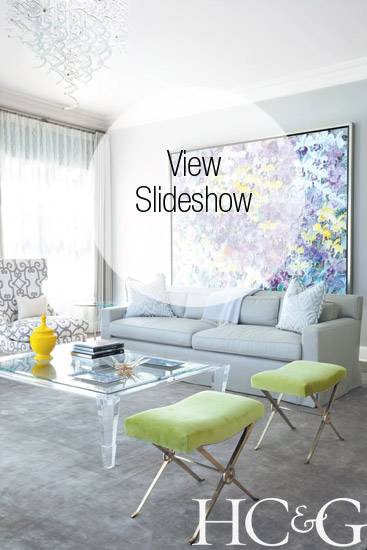 One snowy January day six years ago, Kathy Reilly and her husband set out for the Hamptons to look for a second home. The Manhattan residents had rented in the off-season in Sag Harbor and liked being part of the year-round community, but as they thought about obtaining a more permanent abode, renting increasingly didn’t make sense. “Buying was ultimately the better solution,” says Reilly. Aside from new construction, the couple’s only requirement for a residence was geographic: “We knew we wanted to be somewhere between Southampton and Georgica!”

To expedite the process, the two busy professionals worked with a broker—who promptly took them to ten houses that same day. “This was the third one we pulled into,” Reilly says of the pretty neo-traditional on a dead-end street near Mecox Bay. A backyard, then covered in snow and crowned by an aged willow tree, was almost more alluring than the impressive shingle-style residence. “It felt expansive and idyllic,” she recalls. The house was open and had good energy. It turned out to be their happy medium. Having had only one previous owner, the two-year-old structure was also move-in ready, another plus for the newly married couple, who were creating their first home together. Nine bedrooms meant plenty of space for family and friends to visit, and a large basement has been turned into an office for Reilly’s husband, a financial professional. “It’s command central,” she says, adding that the house has now become his sanctuary. “He wants to go out east every chance we get.”

Reilly’s flexible work schedule gave her the time she needed to finish the decor. She is the founder and CEO of Lifestylist Advisory, a bespoke marketing firm that works with high-net-worth organizations on projects large and small, down to every last detail. Such focus comes naturally to Reilly, who decorated the home by herself—with a little advice from her friends, such as decorators Kerry Delrose and Greg McKenzie. (“My husband has a great eye too,” she adds.)

The couple’s desire was to craft rooms that were polished, but not precious. A prime example is the study, where Reilly doused the walls in Sherwin-Williams’s Inkwell, a deep indigo. (“I wanted the room to be moody—not navy or preppy,” she explains.) With a sheepskin rug and armchairs covered in a nubby Romo fabric, it’s the go-to post-dinner-party space for port by the fire.

Lighting has been employed to great effect throughout the home, epitomized by the dramatic 3form fixture in the foyer and the dining room’s white coral chandelier. In the master bedroom, Sag Harbor–based artisan Helen Gifford’s custom-made Sea Urchin chandelier lends extra shimmer to the gray and lavender color palette. The couple invested in pieces by other local talents as well, like Shelter Island artist Fran Taubman, whose wrought-iron coffee table and sculpture grace the study, as does a photograph by Bob Tabor. “It feels good to be connected to the community,” Reilly says.

Being a bigger part of the whole has paid off for Reilly and her husband, who have been taking full advantage of their East End retreat. “We go out several weekends a month—even in the winter,” she says. “I love jumping in the Jeep to go to dinner at Nick and Toni’s.” The couple enjoy entertaining and do so often, both indoors and out. Each year, they host a signature party they call “Longest Table, Longest Day,” setting up a table for 45 by the pool. The annual soiree, which takes place in June before the social season kicks off in earnest and coincides with the summer solstice, has become a way for them to celebrate the serene environment they’ve created with those they hold dear. “Being here enables us to exhale,” she says. That’s the whole point.”

A version of this article appeared in the July 15 2015 issue of Hamptons Cottages & Gardens with the headline: Life of Reilly.