Inside a Bridgehampton Home by Architect Norman Jaffe 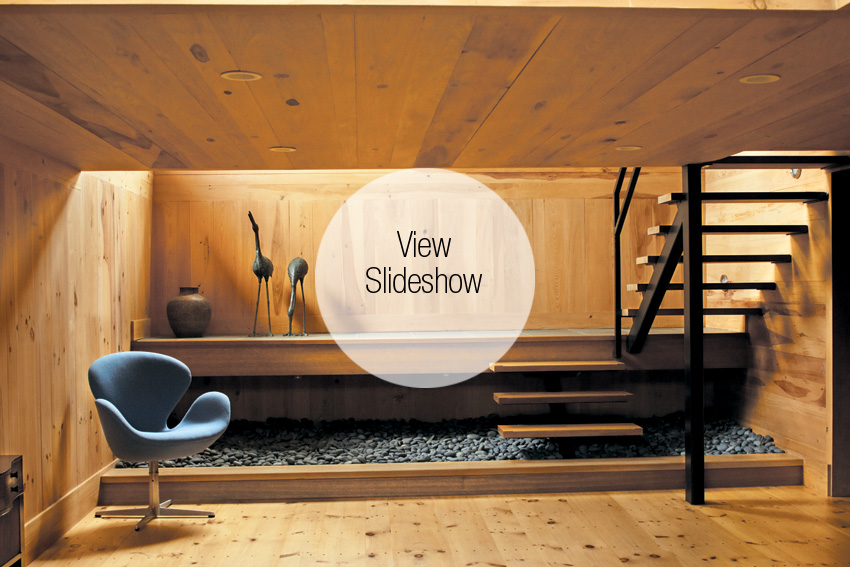 Prolific and talented, architect Norman Jaffe built dozens of unconventional modernist homes on the South Fork from 1968 to 1989. A master of the dramatic gesture—the long, low wall; the acutely angled roof climbing skyward; barn and saltbox shapes pushed to the point of abstraction—he established his practice in Bridgehampton in 1967, when potato fields still dominated the East End landscape. Four years later, Jaffe built a wedge-shaped, 3,500-square-foot home for himself on a one-acre plot not far from the ocean. It’s vintage Jaffe, with an exaggerated, sloping roofline and enormous glass dormers, tied to local vernacular by the use of stone walls and cedar shingles.

Fifteen years ago, Ron Rubenstein, a stockbroker, purchased the property after poring over old issues of Architectural Record and discovering Jaffe’s work. “I got great pleasure from finding something out of the ordinary,” says Rubenstein, who now lives in the house year-round. When asked to identify the living room, he shrugs. “These rooms sort of defy defintion,” says Rubenstein, gazing around a light-flooded central core, where the ceiling soars to 42 feet. An open wood staircase ascends to a balcony with a master suite; another leads down to two lower levels with four additional bedrooms. The kitchen and dining areas are included in the cathedral-like core of the house. Back in the day, Rubenstein says, “There was a conversation pit here, with white shag carpeting, Marimekko pillows, and big plants. Now it’s where I like to lie down and listen to jazz.”

Over the past four decades, Jaffe’s design has aged better than the infrastructure itself. Rubenstein recently embarked on a careful upgrade, reinforcing the house’s framing, re-shingling the exterior, rebuilding the decks, overhauling the kitchen and four baths, and bringing in new HVAC. But he made only minor design changes to Jaffe’s original plan, retaining characteristic details like built-in beds and nightstands and a gangplank-like walkway on the lower level in lieu of a traditional landing.

Rubenstein hadn’t intended to do a full-on reno. It began when he hired Keith Boyce, who had been Jaffe’s draftsman and took over the firm upon Jaffe’s death in 1993, to design a freestanding garage that would be in harmony with the house. After which, says Rubenstein, “I had a sparkling new garage, then realized the house was falling apart.” He and Boyce share an interest in Japanese design (Jaffe himself lived in Japan for two years), and Boyce agreed to advise and consult on a sensitive upgrade.

The only real design change: removing a wall at the top of the house that closed off the master bedroom and partially blocked an oversize clerestory window through which, Rubenstein says, “I watch the seasons change.” That bedroom now opens to a balcony that overlooks the central core below and functions as an airy home office with a new built-in desk/dresser combo. There are two new mahogany sliding doors with a Japanese feel: one slides to close off the master bedroom when needed, and the other conceals the kitchen when Rubenstein entertains.

Pre-reno, says Rubenstein, “The house looked a lot darker and older.” The original, discolored interior cypress paneling came down and was replaced with fresh wood, and new slate tiles were carefully chosen to match the originals as closely as possible. Furnishings are spare but choice throughout, including a Hans Wegner sofa and console, a Finn Juhl desk, and a contemporary Japanese dining table paired with Italian ’70s chairs by Vico Magistretti. What had been Jaffe’s double-height studio, on the lowest of the four levels, is now a cozy den, furnished with a Chesterfield sofa, TV, and modest wine cellar.

In keeping with Jaffe’s vision, the rooms are still multi-purpose and free-flowing. “This house is contemporary and suitable to my life,” Rubenstein says. “I don’t really need fancy draperies or a formal dining room.”

A version of this article appeared in the August 15 2012 issue of HC&G (Hamptons Cottages & Gardens) with the headline: The House That Jaffe Built.