Inside a Bright Westport Family Home 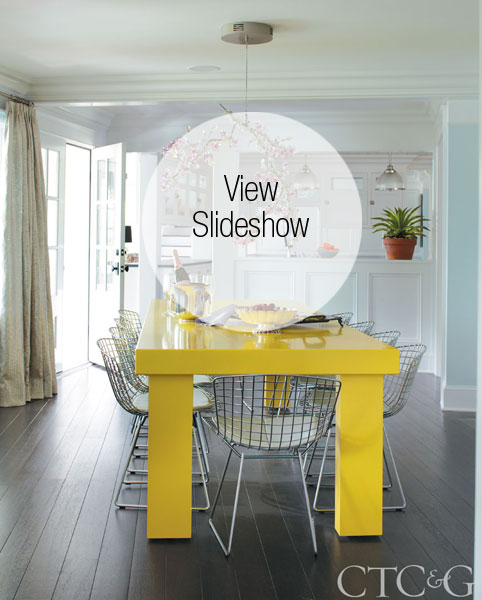 Two bedrooms, three kids and one more on the way? Jennifer and Steve Lau decided it was time to make a move from the Upper West Side. Falling in love with another town wasn’t hard (they had owned a weekend house in Westport for years), but they “wanted to keep a little bit of the city,” says Jennifer Lau.

Working with architect Paul Harris of Cole Harris Associates in Westport, the couple demolished their existing Connecticut home and on the same  property built a modern barn-style house “laid out almost like a big open loft,” says Lau, and with ample room to embrace their growing family (just in time, as a fifth baby would soon be on the way). Lau wanted something more SoHo than suburbs for the interior too. “I was so scared to move out here, that everything was going to be cookie cutter,” she says. “In Connecticut, you have the feeling that everything is going to be dark green.”

Enter Connie Keller and Sabrina Brown of Keller Brown Design & Decoration. Both parents themselves, they knew this active family’s lifestyle called for fresh, energetic style—and a focus on clean minimalism. With five Lau kids to consider, today ranging in age from four to nine and a half, less would  be more when it came to décor. “It was already a houseful before they had furniture,” notes Keller. Bright and uncluttered would be the goal; personality  and pop would be provided by liberal lashings of color, inspired by Wall Street trader-turned-personal shopper and stylist Jennifer Lau’s closetful of fashion accessories and shoes.

The color palette was further honed by one of the Laus’ first purchases—Perry Burns’ Yellow Dance, a joyous oil painting that hangs in the living room. “We drew from all the colors in that painting and threaded them throughout that house,” says Keller, creating a Crayola rainbow, both sophisticated and fun. The daffodil yellow of a lacquered Parsons-style dining table bubbles up again in a daughter’s bathroom, where handpainted yellow suds float on the walls. Vivid carrot orange Kravet canvas cushions on vintage wrought-iron furniture punctuate the screened porch. A crimson duchesse silk fabric frames the living room windows. And in the playroom, a purple-and-chartreuse Stark rug hides all evidence of spilled grape juice or muddy footprints.

No room is hands off for little fingers. “Every room in the house gets used,” says Keller. An emphasis on durability didn’t preclude special furnishings, though. “We invested in some good quality pieces,” says Lau, “but ones that were family-friendly  and comfortable.” A pair of antique chairs from Florian Papp in the family room is a “keepsake,” says Keller. “Even though they are antique, they are so sturdy that you don’t have to worry if someone is sitting on them or standing on them or bouncing.” With bouncing in mind, precious floor lighting was shunned, but a twinkling  Tord Boontje Swarovski crystal blossom chandelier dangles like a glittering earring from the ceiling (safely out of reach)—a hint, perhaps, at Lau’s new jewelry line.

In her home, as well as her closet, the fashionista favors “timeless with twist.” “We have a lot of great amazing antique pieces that are valuable and will always be classic pieces,” she says, “but then the fabric on them is a little bit edgy. Some of our tables are from the 1600s, 1700s, but we’re adding an accessory, or painting our chairs blue.”

With five kids, there’s always company, but the Laus love to entertain too. “The kids go to bed at eight, and we’ll have people come over at nine for  dinner.” Out comes the grown-up grape juice, and in go all traces of playtime. “There’s not a lot of evidence of kids,” says Lau. “Everything is built in, and all of the toys have a cabinet or a space to go in.” At least until morning, when the fun starts again. “It’s a constant party,” says Lau—a party of seven, every bit as energetic, playful and bright as their house.

A version of this article appeared in the February 2012 issue of CTC&G (Connecticut Cottages & Gardens) with the headline: Play House.