Inside a Coastal Home That Embraces Nautical Holiday Style 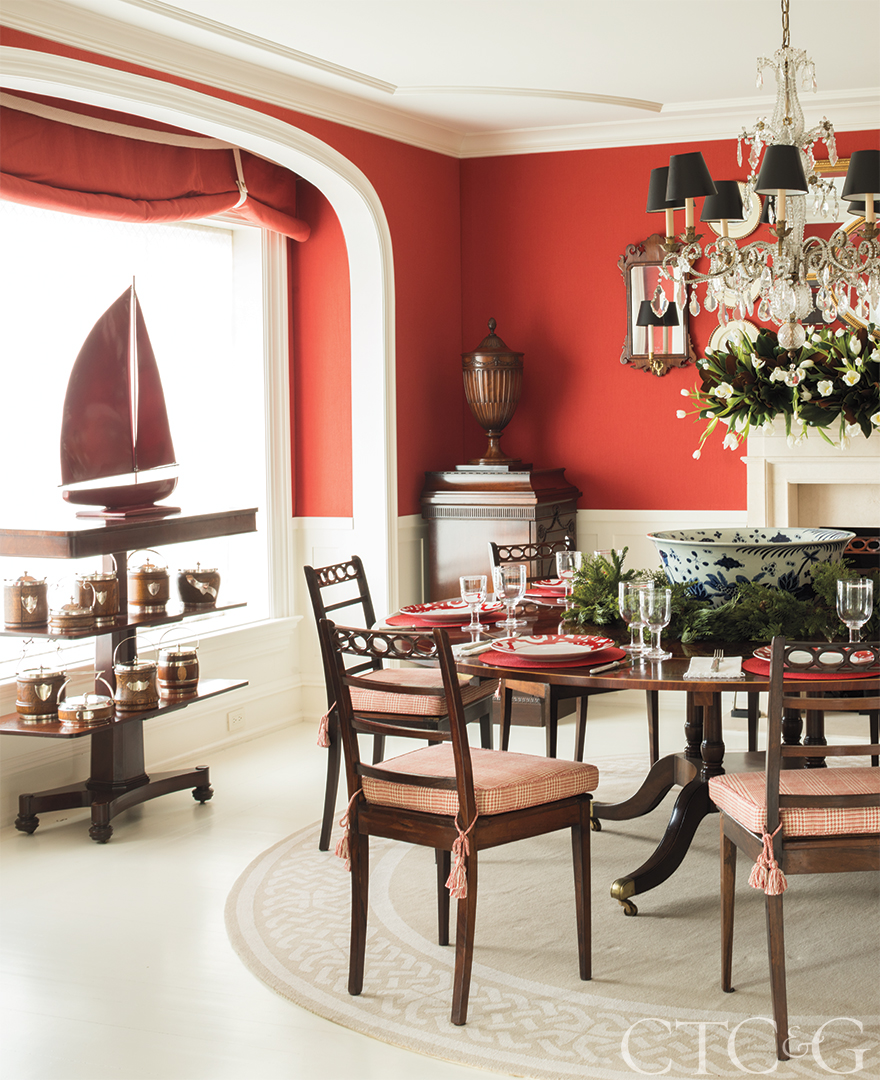 A sailboat appears to have docked for the holiday season in this home on Long Island Sound. Given the locale of the property, whose back lawn slopes down to the water’s edge, the schooner picked a seemingly insecure location to moor—atop the family’s Christmas tree. But despite the weight, it’s set firmly in place with wires that are hidden among the branches.

Although the room décor in this 1920s-era, six-bedroom house is the result of interior designer Anthony Baratta, seasonal flourishes were added by Richmond, Virginia–based floral designer Tommy John Bader. “Given Tony’s vibrant use of color, his signature, I decided to go minimal, and that’s one reason why I chose a tin weathervane to use as a tree topper,” says Bader. “The boat was in Tony’s shop, and it made sense to use it since the homeowner loves to sail and loves all things nautical.”

Elsewhere for the holiday season, which the homeowners and their four grown children celebrate with parties and dinners, Bader wrapped banisters with magnolia branches and pine cones, created a focal point in the dining room with a mantel abloom with white tulips and magnolia leaves, and highlighted some of the house’s exterior architectural elements with handsome wreaths and trimmings.

Baratta feels particularly proud of his work on this home because the client was such a longtime fan of his. She so admired his well-honed aesthetic of bright colors, use of braided rugs to delineate spaces within rooms, and his brightly painted walls and ceilings treated with decorative trims, that she had an earlier decorator try his best to imitate Baratta’s style. “This was well before we met,” says Baratta, “and she tried to duplicate much of what I like to do. I was very flattered when I saw the work by someone else. I found it amusing.” 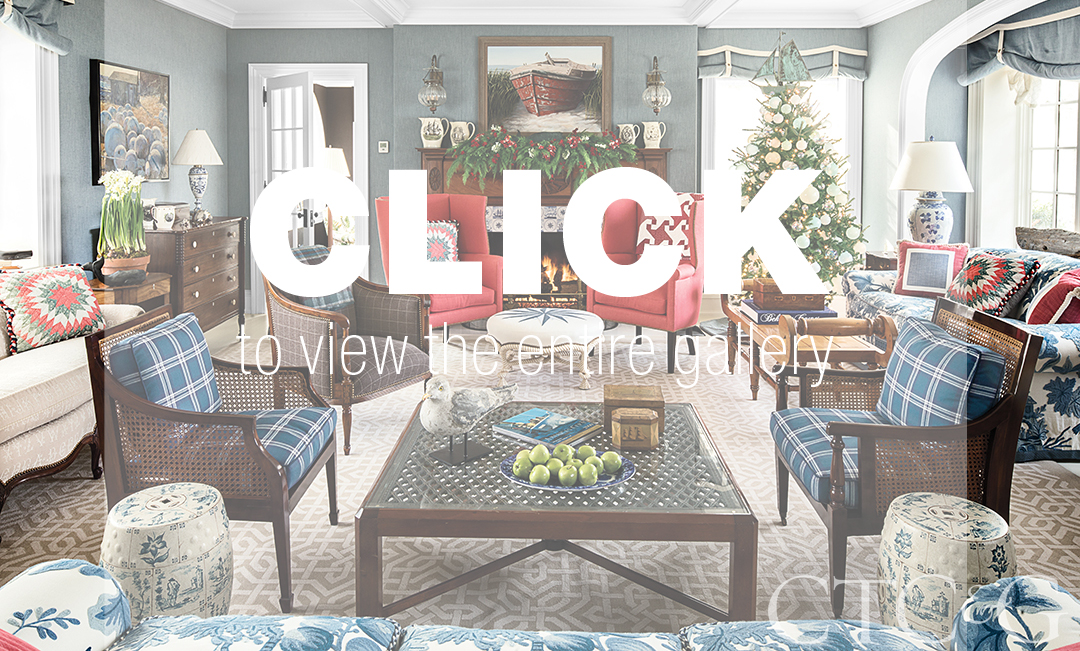 For what became a major refreshing of the house, the client this time hired Baratta. “This was a very fast turnaround, from start to finish probably four months,” says Baratta, “but when you have a client who’s this fun and this trusting, it’s pure pleasure.”

One of Baratta’s many talents is his ability to solve a home’s architectural shortcomings. Although this period home is filled with novel shapes and nooks, the ceilings are surprisingly low. To remedy that situation, especially in the entry hall, he brought the wainscoting up three-quarters of the way. “By putting wallpaper just on that last quarter, it draws the eye upward,” says Baratta, “and makes the ceilings feel higher.”

Although the homeowners love to be out on the Sound, Baratta was particularly careful not to overdo the nautical motif.  “After all, they live here full time, this isn’t a weekend house,” he notes. “One way we played that down, right at the entrance foyer, was to use a rope-motif wallpaper, but in brown, which quiets the space and allows items to be set off against it.”

In the formal dining room, Baratta chose a Nantucket red, whose hue skews to pink, and rough-handed Belgian linen on the walls. “I guess you could call it a signature color of mine,” he says. “Red is my favorite color, the shade makes the dining room into a statement room, and, supposedly, red enhances a person’s appetite.”

When configuring the living room seating areas, Baratta allowed for the many parties the clients host for family and friends. “We took into account exactly how many people they typically entertain at once, and we created enough seating for them and arranged furnishings in ways where no one would be stepping on toes when they got up.” Three sofas, a settee, window benches and a variety of comfortable chairs provide ample seating choices. “We always position things for what I refer to as the ability to ‘easily dance around the furniture,’” he adds.

Now fast friends with the delighted homeowners, Baratta and Bader are already invited to the family’s annual Christmas party. As Bader says, “She invited me and said she wanted me to duplicate exactly what I had done for the other year’s party.”

A version of this article appeared in the December 2018 issue of CTC&G (Connecticut Cottages & Gardens) with the headline: Moored for the Season.

This article appears in the December 2018 issue of CTC&G (Connecticut Cottages & Gardens).