Inside a Connecticut Cottage with a Touch of California Cool 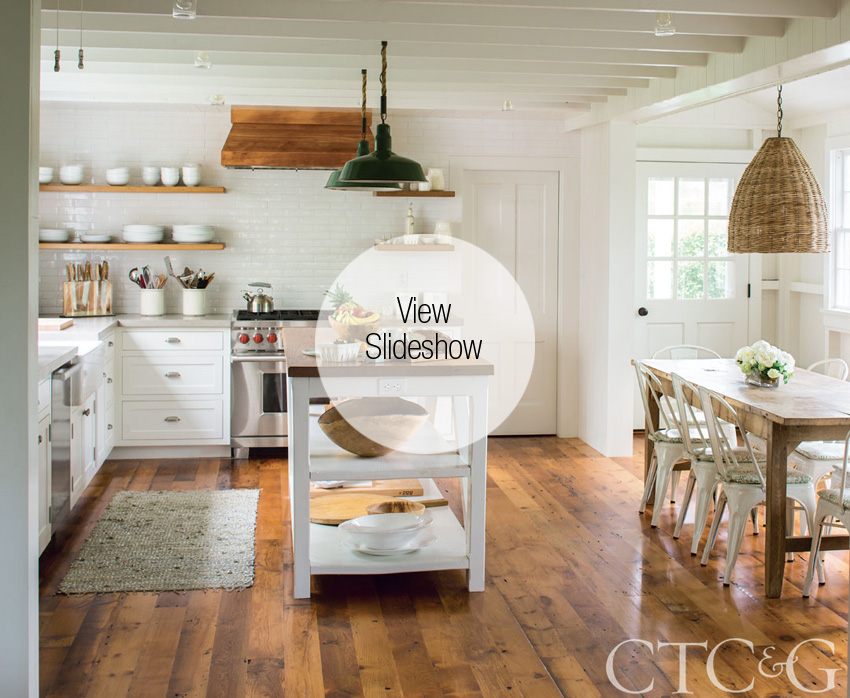 Against all real estate odds, it was the most simple of rooms—a foyer, bare boned and stripped of its insulation—that sold a California family of five on a Niantic house they planned to turn into a summer cottage. The client bought the property, a house made of two cottages that had been combined into one, and tapped their design-savvy friends—architect John Allee and designer Hannah Childs—to revive the house’s original spirit. From the beginning, it was an odd mix: Allee, an architect rooted in modernism, and Childs, a designer with a strong lean toward traditional, were thrown together with a client who has a definite California cool aesthetic. “It was a nice tension between us,” says Allee. “Lots of friendly arguments, but the process ended in some very cool stuff. It’s a traditional house that has a raw honesty to it.”

“It was in real disrepair when the clients purchased it,” says Childs. “They wanted to bring the house back to life as it once had been—and not tear it down and start over as is the norm these days.” Since most of the foundation was rotted, the structure was lifted six feet off the ground. It was an entire gut renovation, but redone as a seasonal cottage. New siding and shingles were added to the exterior, and, inside, once the original framing was exposed, it was simply painted and left as is.

“We basically stripped it back to its original state,” says Allee. “When we peeled away all the layers, there was instant character.” The exposed framing became utilitarian in different places throughout: shelves for glasses in the bar area or places to set picture frames. The wide-open space also meant plumbing and electrical were in plain view. Sure, it sounds industrial, but copper pipes add warmth, and the electrical was painted the same white as the walls—both quiet details making it decidedly not industrial. “It’s not a sheetrock box,” says Allee. “There is this subtle shadow and visual interest that exposing everything allows. Treating the plumbing and electric like decor gives the whole house a soothing palette.”

The house is appointed, too, with the delicate balance between ideals of the architect, designer and client. The same white wall color and woven wood shades were used throughout for a clean and modern backdrop. While at first glance the dining room verges on minimalistic, it’s the furnishings—subtly patterned or textured—that make it cozy and inviting. A neutral but boldly patterned Madeline Weinrib rug sits under a custom white oak trestle table designed by Allee. Rustic-looking dining chairs were intentionally left without a cushion, and bird’s nest light fixtures hang from the ceiling. “Use of pattern and texture makes a simple, neutral palette more interesting,” says Childs. “And I love funky lighting. A good light fixture can make any space look unpredictable and exciting.”

Case in point: A pair of vintage pendants encased in rope are suspended above the kitchen island and an oversized basket-weave pendant above the kitchen table. Shelves, island and range hood are reclaimed from the house’s original chestnut floor that had been ripped out when the foundation was raised. A more traditional farmhouse sink keeps concrete countertops from going too edgy. “The overall aesthetic is super clean,” explains Childs. “And it’s the mix of the old and new plus subtle surprising touches that make it warm and approachable.”

The same can be said of the formal living room that, like the rest of the house, is radiant in its simplicity: Classically shaped pieces upholstered in linen are punctuated with a contemporary ceiling fan and modern art. A blue and white Quadrille print on the pillows adds just a touch of color. “Everything is new but purposely looks like it has always belonged to the house,” says Childs. “It’s cheerful and fresh while being crisp and cool. It’s welcoming without feeling stuffed.”

A version of this article appeared in the June 2016 issue of CTC&G (Connecticut Cottages & Gardens) with the headline: Simply Perfect.