Inside a Contemporary Country Manor with a Nod to the Past 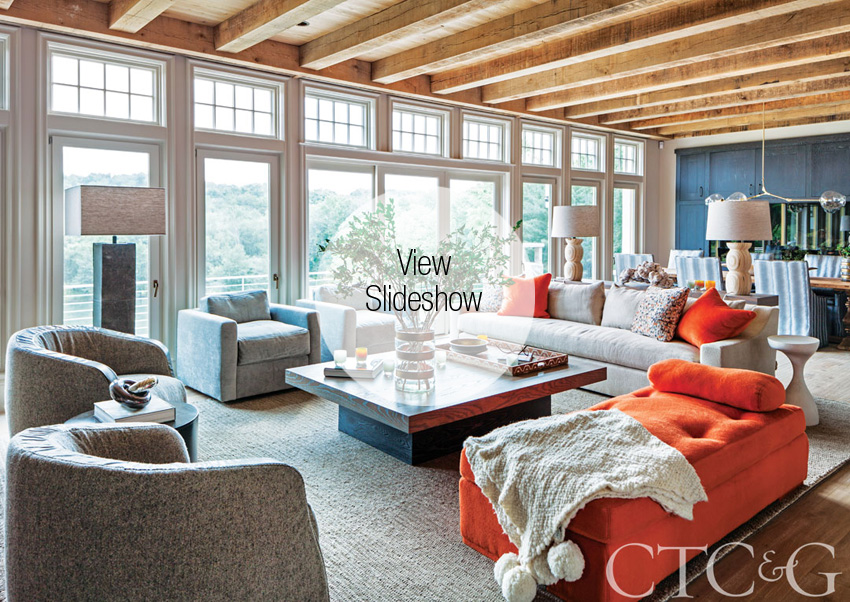 Traversing the hillside road that leads to the main residence at Maple Hill Farm is a bit like traveling back in time. After passing through an allée of mature maple trees, the sight of barns, antique cottages, and steam rising from the chimney of the sugar house where syrup is made all signal a bygone era. But maintaining a sense of history was just part of architect Andrew Bartolotta’s assignment when he was called upon to refurbish the 50-acre property in Redding. “The homeowners wanted a European-styled home in keeping with the gentleman’s-farm surroundings,” says Bartolotta, a principal at Beinfield Architecture, who razed an existing structure riddled with enough problems that remodeling it made no sense. “We didn’t want to design a historical reproduction in its place, but rather a contemporary home with a nod to the past.”

For inspiration, he turned to early 20th-century English architect Charles Voysey, whose country-home designs had definite modern leanings. Often rendered in stucco, they were defined by a lack of superfluous ornamentation and their embrace of the landscape. Bartolotta’s version, a grand-scale, buff-colored stucco estate trimmed with restrained Indiana limestone caps and sills, is intentionally set at a high point on the property to garner expansive views of the pond. On the front elevation, the juxtaposition of Colonial-style pilasters with the more contemporary façade marks the beginning of an intentional blurring of old and new.
Establishing the historic side of the equation is a stone foundation, which the architect selected with the help of Edward Mish of Connecticut Stone. “We put together a special mix of local stones we dubbed ‘Old Redding custom blend’ that is reminiscent of classic New England architecture,” says Mish about the stacked material that repeats on the lower level on the back of the house and on the outdoor fireplace. For continuity, the same stone continues on the interior where it grounds the wall behind the staircase.

Wood and metal round out the materials palette, and interior designer Amy Zolin interjected all three elements, often with contemporary interpretations, into various places. In the foyer, she collaborated with Tyra Dellacroce (also of Connecticut Stone) on the deco-inspired chevron floor pattern—a meld of marble and wood. In the master bathroom, the marble is traditional but the design provides a bold modern pop. According to Dellacroce, getting the pattern installed correctly was no easy feat. “It mandated extra scrutiny to insure an even distribution of the various brown, blue and white tones, and we looked through several lots of material to get it just right,” she says.

While the iron that appears on the French doors that open to the dining room and on an interior kitchen window would look equally at home in a city loft, the designer is quick to point out that on a farm there is metal on the tractor wheels and wood beams in the barn ceilings. “Along with bringing the stone into the interior walls,” she says, “these materials give the house great significance and almost age it with character that can’t be created by paint on Sheetrock walls.”

With five children between the ages of two and fifteen among the home’s inhabitants, by necessity furnishings strike a balance between sophistication and practicality. The formal dining room, for example, which occasionally doubles as a space for business meetings, is appointed with a black walnut and steel table that is equal parts stunning and indestructible. Everyday meals are served near the kitchen on a table surrounded by chairs upholstered in wipeable faux leather, and the adjacent family room is filled with custom furnishings that pair kid-friendly comfort with a dose of grown-up flair. “This is where they play games and hang out as family,” says Zolin, who filled the space with commodious furnishings upholstered in mohair, soft wools and chenille. Noting everything is luxurious but natural just like the materials in the rest of house, prompts her to add, “Overall the house reads as a substantial country manor, but it’s the contemporary aesthetic that keeps things understated and real.”

A version of this article appeared in the September 2016 issue of CTC&G (Connecticut Cottages & Gardens) with the headline: Set in Stone.