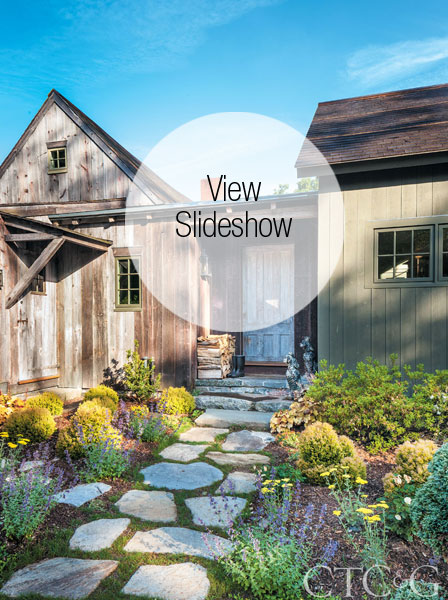 To amble down Old Stone Post Road in Lyme is to retreat ever so slowly away from the present day—away from the whir of traffic on I-95, just a few miles south, and away from any of the nearby towns dotting Long Island Sound. It’s here, among verdant nature preserves and vast, open farmland, that an unassuming community of historic homes gets its much deserved second wind, all thanks to a merry band of builders and preservationists who set out in the 1980s to transport a dozen 18th-century structures to this tiny slice of New London County.

One such structure was a 1750 blacksmith shop from New Hampshire, which, like the others, “came down in a box, on a trailer,” says Skip Broom, owner of Hadlyme-based H. P. Broom Housewright and the leader of a pack that rebuilt the structure beam by beam. On reading about the project in a magazine a few years ago, Greenwich residents Paula and Mark Archie were so taken with its uniqueness that they saw past the then-owner’s decor—it was “an über-modern house inside a very authentic barnlike structure, with everything white, no trim, stark-white walls, and stark-white leather furniture,” says Paula—and envisioned a family home for their two daughters, now 23 and 26, that would indulge their passion for the architecture of old.

In fact, that magazine remained in Mark’s “binder full of ideas” for a while, as if to prophesy the Archies’ next move. So when the converted blacksmith shop eventually came on the market, “I think he mentally bought it before he got to the door—and truly this has happened before; I kid you not,” says Paula, chuckling about her husband’s propensity to buy and renovate homes. Not that she blames him one bit: Mark, the owner and founder of Mark Inc., a boutique fine carpets firm based in Greenwich, says they both “have a love affair with structures and houses. We’ll look at houses and we’ll chat about them, and very often we’re in agreement with what it is we like and appreciate.”

Since Broom had completed the original residential conversion, it only made sense for the Archies to enlist him again as the housewright—“design builder,” in 18th-century verbiage. Together they hatched a plan to reconfigure the layout of the bedrooms, “redefining the space so that it would work for us,” and adding windows, says Mark; building a wing with an entry foyer, a totally new kitchen, and guest suite; remodeling the stair hall and bathrooms; finishing the second floor, which was “nothing more than attic space,” Paula says, and gussying up the trim-less interiors with “all those bells and whistles of a warm home,” she adds. “They wanted to make the inside look more rustic and less modern,” notes Broom, who aimed to make the exterior “look like a complex of barns that was added over the years.”

From the approach, says Paula, the structure now “sits like a barn in the field. If you were to drive around it, you would never know it’s a house.”  Inside, of course, it’s the opposite, filled with meaningful furnishings and decor.  “The kind of things that make a house feel like a home are special things that we’ve collected, and they’re treasures,” says Paula, mentioning the antique  Mozart and Beethoven busts that perch under the wood-beamed ceiling in the new foyer. “It’s always been about charm,” chimes in Mark. “It’s never been about big is better. It’s about character and charm.”

It’s this foyer that was purposely designed as a “green room,” a place to stop and take a breath before turning left and stepping into the staggering “great room,” formerly the blacksmith shop. Ensuring a dramatic transition from small to large was high on the list of Mark’s priorities. “I always believe there should be some sort of staging before you reach a room,” he says. “I think there’s an emotion that comes over everyone, and the reactions we’ve seen from people are just amazing.”

A version of this article appeared in the March 2013 issue of CTC&G (Connecticut Cottages & Gardens) with the headline: American Pastoral.