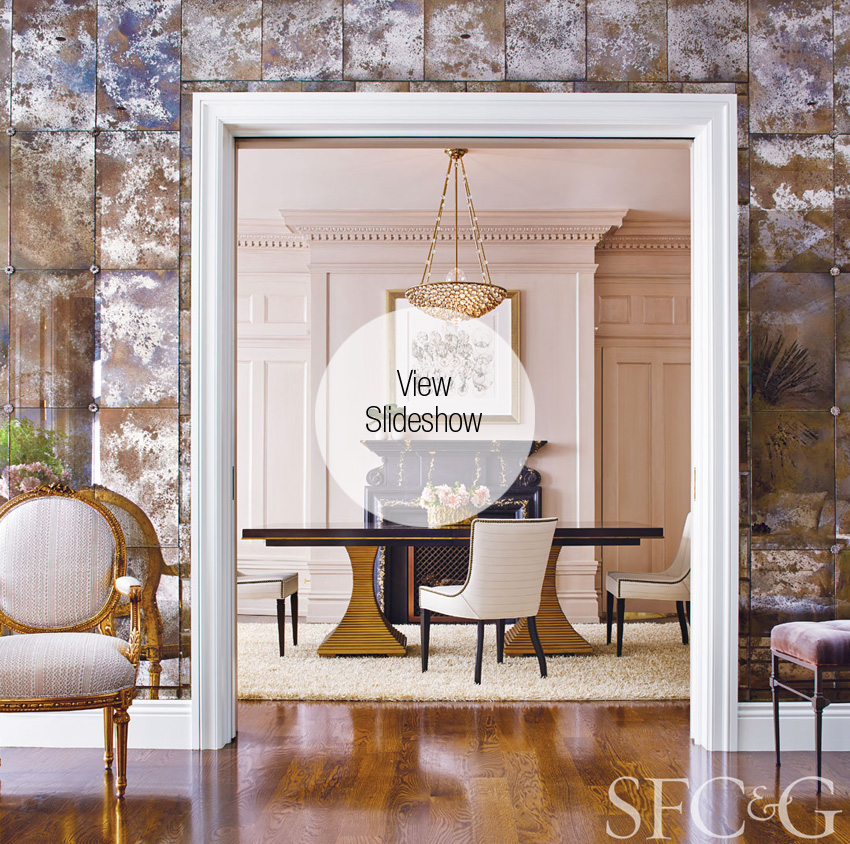 The interior transformation was more about the residents—a couple in their fifties who relocated from a house on the Peninsula to a San Francisco pied-à-terre. “They have international sensibilities—they travel a lot—and were open to creating a new city lifestyle,” says interior designer Angela Free. “They wanted a more sophisticated, cosmopolitan place.” They found their stage in a 1920s property on a wide, magnolia tree-lined street in Pacific Heights. The understated Classical Revival building featured dentil moldings, eyebrow windows and metal grille work, and inside were beautifully patinated four-inch plank walnut floors, exceptional millwork, stone fireplaces and a roof deck with stunning views.

Free set out to sound a few modern notes as she tailored the 3,000-square-foot space to the couple’s tastes. As a counterpoint to the formal fireplace mantel in the living room, she chose a bold screen with jewelry-like links finished in pickled gold leaf from Michael Taylor Designs. “We loved adding a rectilinear shape to complement the curvilinear details,” says Free. The pattern is echoed directly above in a Jean de Merry eglomisé piece depicting the tree of life. “The ceiling is close to 10 feet, so there was a lot of room to go vertical,” she notes. On either side of the fireplace, Free placed a pair of matching Porta Romana 56-inch-long consoles with black marble tops that sit on three arched legs studded with faux mussel shells. “They’re very organic,” says Free, “and balance the rough with the fine.”

Near the arched front windows, with their distinctive oval moldings, Free created a chic sitting area. “The owner wanted a place where he could read,” she notes, “and we had the luxury of a large enough room.” An existing Schiaparelli sectional, made by Belmar, perfectly fit the bay window, so it remained, as did silk satin draperies. “I love the nubby quality of the linen on the sofa—it’s not too rustic, not too formal,” notes Free.

An antiqued mirrored wall with carved-panel pocket doors­ was created by the home’s previous designer, Dara Rosenfeld­. The wall frames the dining room while making a dramatic statement. A carved wood table with gold beading takes pride of place against a backdrop of a black marble fireplace. “We knew we wanted to do a stunning table,” Free says, “but not get too exuberant with the design—we didn’t want it to fight everything around it.” A glass and metal Oyster chandelier by Anthony Critchlow casts a glow.

In the master bedroom, the palette shifts to soothing blues. Exquisite Fromental embroidered wall covering—inherited from the previous resident—sets the tone for the room. “The plum branch pattern has a lyrical silhouette,” says Free. A shapely custom headboard upholstered in ombré silk complements the floral pattern. “It flows from pale ivory to purple tones to blues and greens—it’s very watercolor,” explains the designer.

Says Free of her clients’ new space: “It’s timeless, but still of the moment. We started with beautiful architecture, light and flow, and now it also has a lot of attitude.”

A version of this article appeared in the September 2016 issue of SFC&G (San Francisco Cottages & Gardens) with the headline: Urban Refinement.