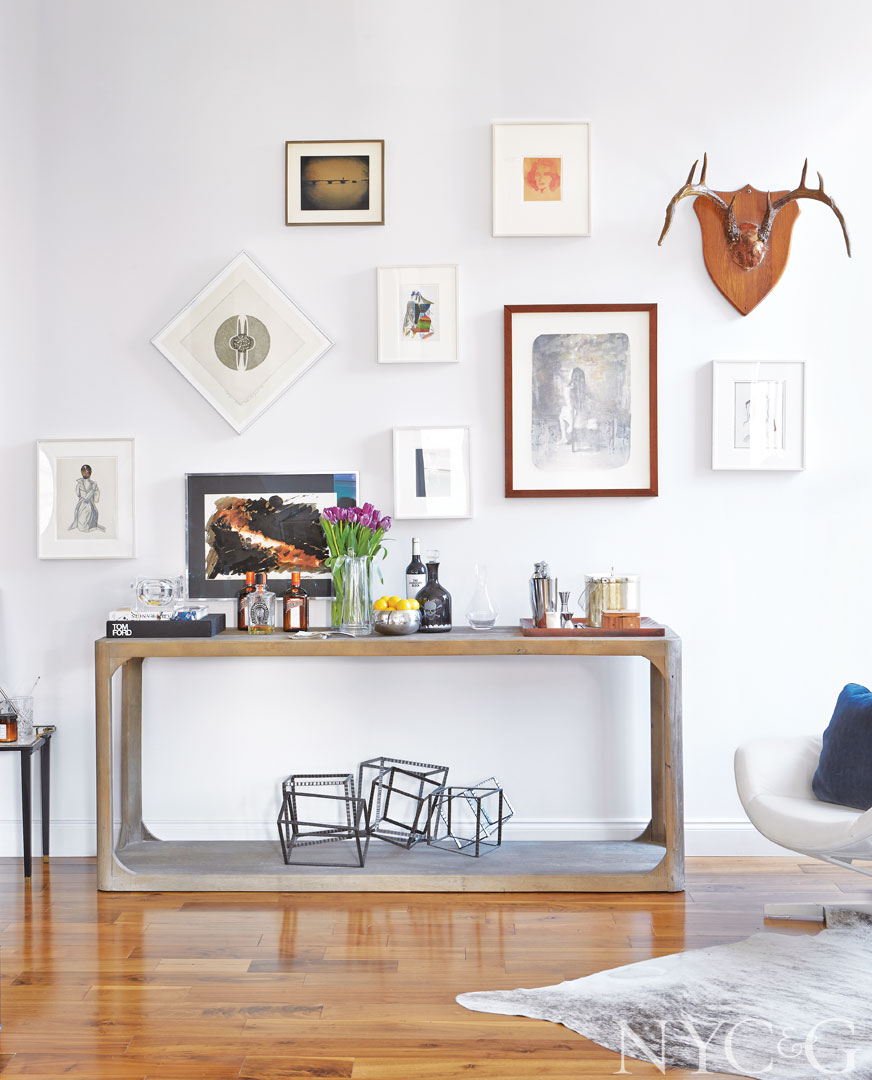 At a certain point, you have to bite the bullet,” says Robin Shobin, who left her job as a credit analyst at J. P. Morgan at the end of 2013 to launch Charlotte’s Book, a skincare-and-wellness website. The same could be said of the decision she and her husband, Rick Shobin, made to find a new apartment after getting married four years ago. The couple, who met through their former careers (Rick left the finance world a year and a half ago and is opening a brewery upstate), were beginning to outgrow their 850-square-foot apartment in Chelsea and decided that it was time for an upgrade—and a place that would accommodate an office for Robin as well as the dogs they eventually wanted. Determined to stay in the neighborhood, they found an apartment in a late-19th-century cast-iron building nearby, which had recently been converted into spacious, light-filled condos.

To decorate the 2,400-square-foot, two-bedroom loft, the Shobins called on New York–based interior designer Brendan Kwinter, whom they had worked with a year before, when they renovated and furnished their weekend home in the Hudson Valley. The pair found the decorator—a Toronto native who started her firm, Kwinter & Company, in 2001—through an online search, and were drawn to her easy, eclectic style. “She has excellent taste, but is also very practical,” says Robin. “She knows where you should spend money, where you don’t need to, and which pieces make or break a space.”

The first order of business was to convert the second bedroom into an office where Robin could run Charlotte’s Book—a source for professional, on-the-go women to find vetted beauty treatments and products, along with expert advice. “I’m here all the time, so the space had to fit my lifestyle,” says Robin, who uses the home for everything from meetings to events to photo and video shoots. Kwinter filled the sizable room with a mix of sleek and cozy pieces, including workstations for Robin, the website’s editor, and their interns.

Aside from some preexisting artwork, the Shobins chose to start over with all new furnishings. Custom-made and long-lead items weren’t an option, since the couple gave Kwinter a tight, eight-week timeline. The designer scoured showrooms such as B&B Italia and Ligne Roset for floor models and Lobel Modern for vintage furniture. “I wanted them to have some great mid-20th-century pieces—things that are going to get better over time, and which they can take with them wherever they go next,” Kwinter says. For some texture, she added vintage Moroccan and Turkish rugs from Double Knot. “The apartment is one big, open space, and the carpets lend warmth and dimension.”

Avid art enthusiasts, the Shobins have collected an engaging high-low mix, including many items purchased during their travels. Kwinter accompanied the Shobins to art fairs in the Hamptons and in the city, working with art consultant Marla Helene along the way. “It’s misguided to buy art for the sole purpose of filling a wall, and finding something for the huge area in the entry was especially challenging,” says Robin. Eventually, the trio settled on a large-scale piece by James Kennedy, an artist whose work they were first introduced to at a Hamptons show. “Robin and Rick have amassed a beautiful collection that reflects them so well,” Kwinter says.

As for the dogs the Shobins wanted, two large rescues, Mason and Odin, now have the run of the place—literally, thanks to the open floor plan. “Our apartment can feel a little bit like a dog park at times,” jokes Robin, “but it accommodates all our unique needs, while still giving us lots of room to breathe.”

A version of this article appeared in the April 2016 issue of NYC&G (New York Cottages & Gardens) with the headline: A Clean Slate. 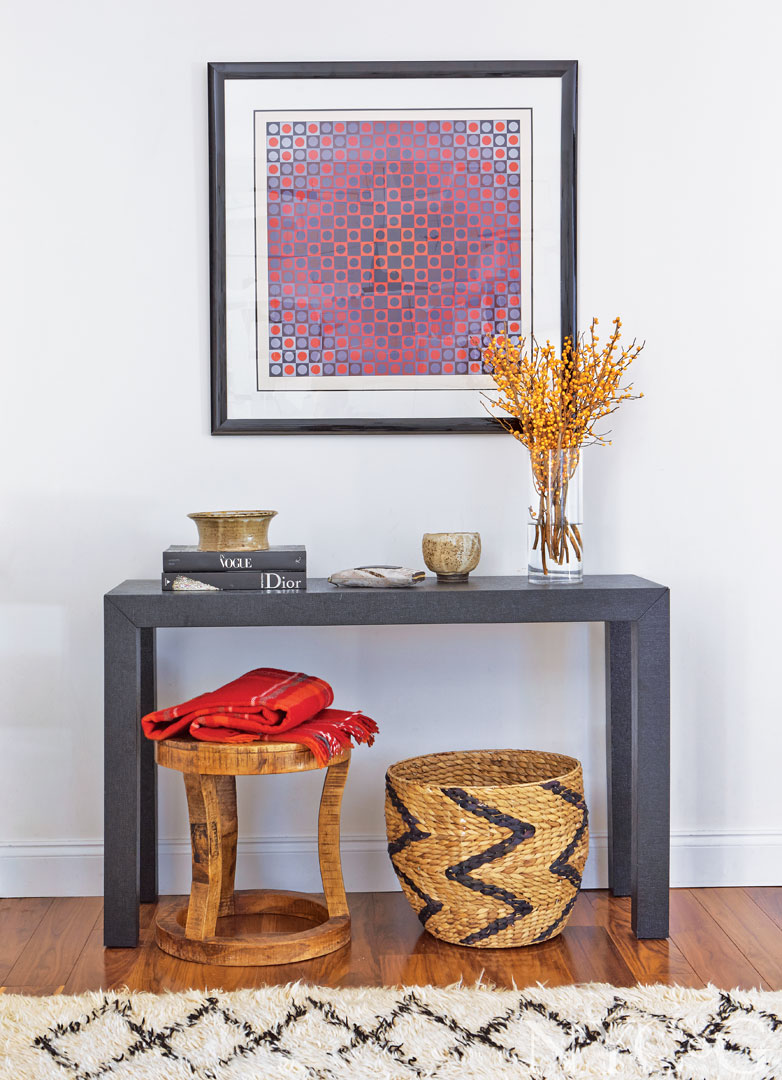 Artwork in the entry includes a vintage Victor Vasarely lithograph, which hangs above a Bungalow 5 Parsons console. 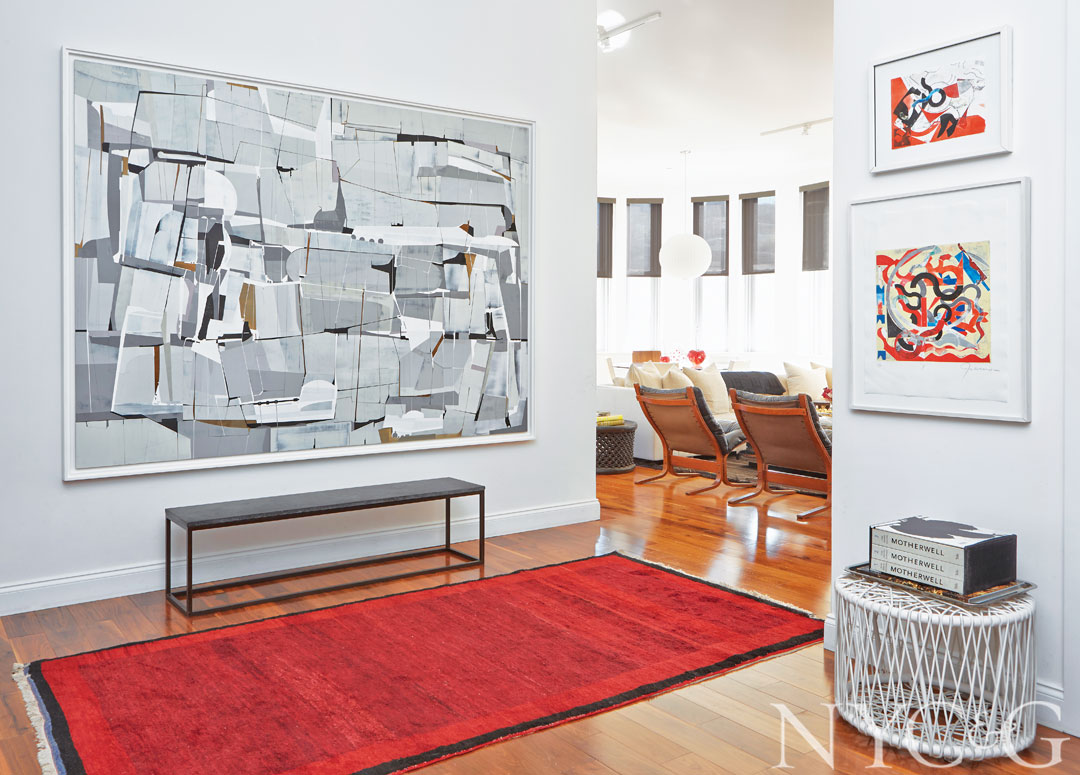 James Kennedy’s oversize Flight Component, an acrylic and mixed-media piece on Masonite, hangs in the entry. The rugs are from Double Knot and the white side table is from B&B Italia. 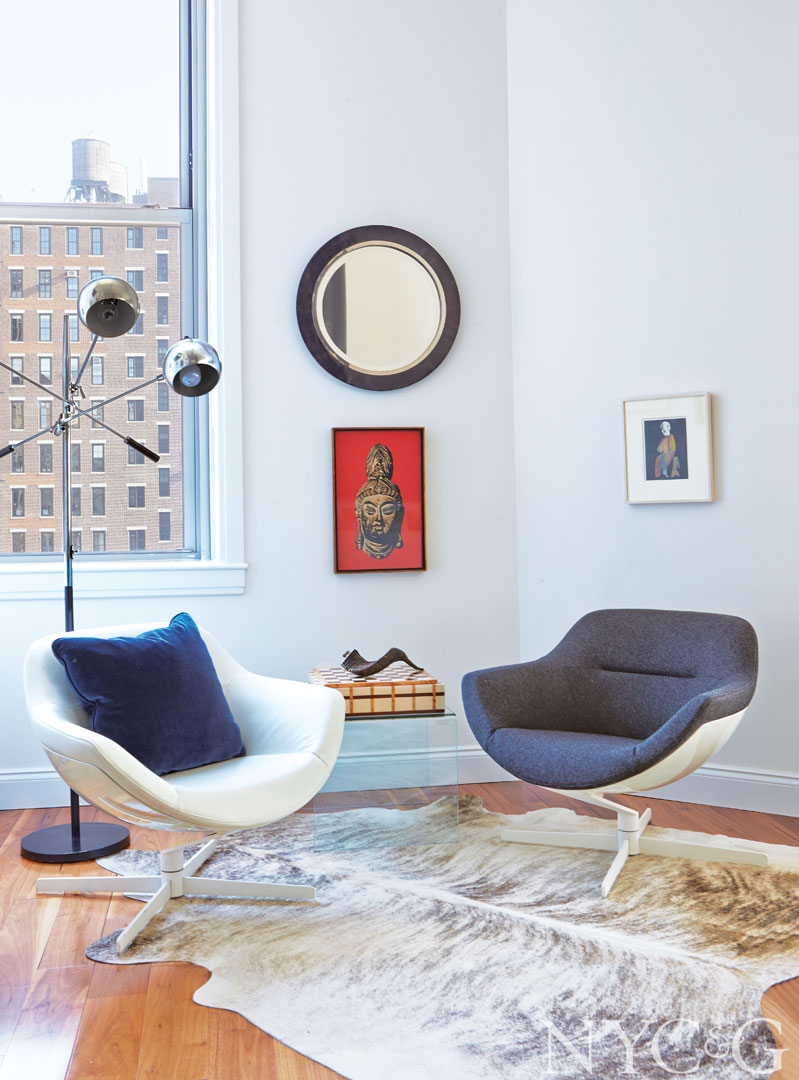 A pair of Jean-Marie Massaud–designed swivel chairs from Cassina sit on a cowhide rug from Design Within Reach. The throw pillow is covered in a Rogers & Goffigon fabric, and the chrome floor lamp is from R. E. Steele Antiques. 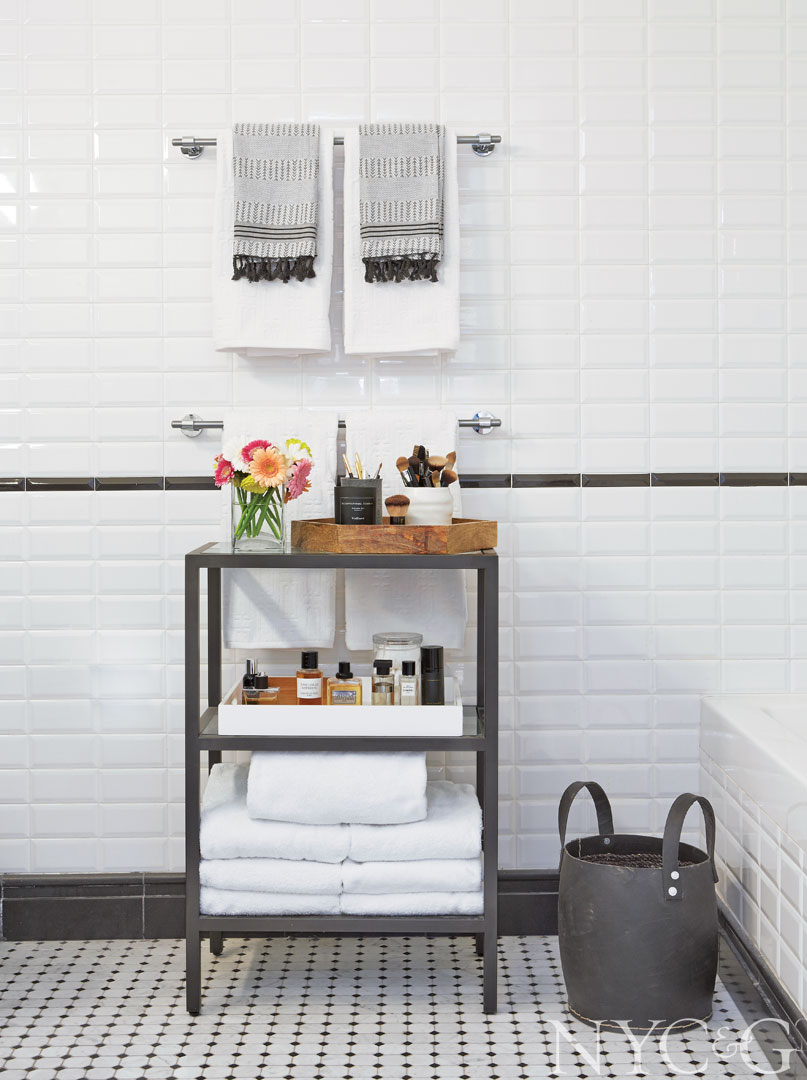 The shelving unit in the master bath is from Restoration Hardware. 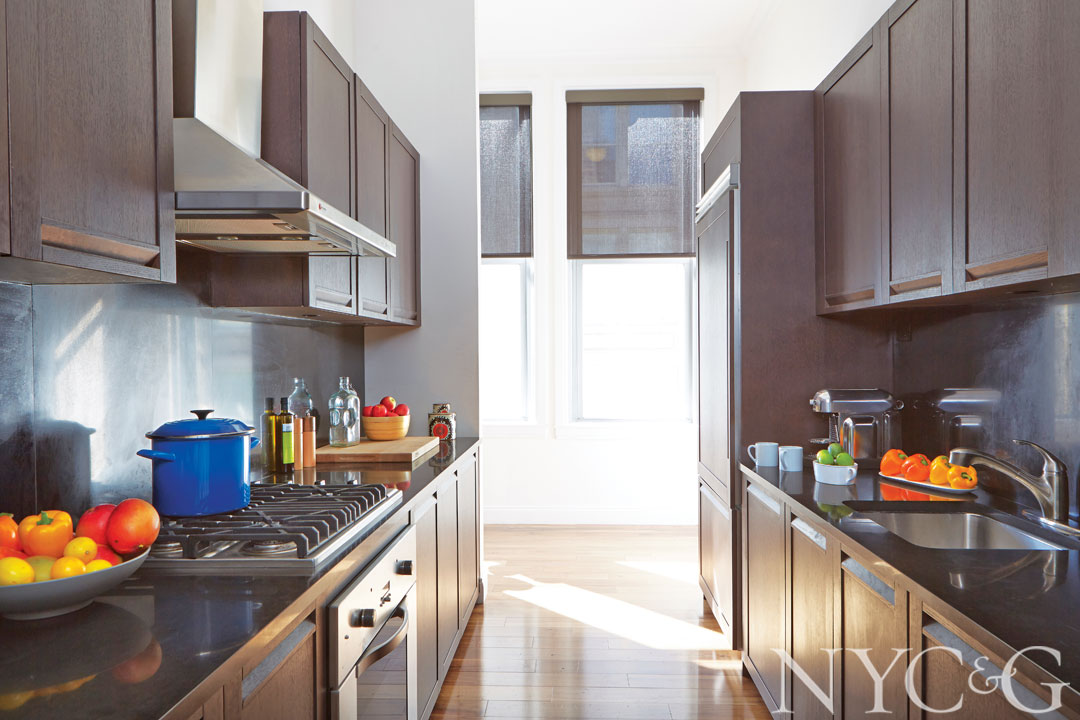 Appliances in the kitchen include a Viking stovetop and oven and a Zephyr hood. 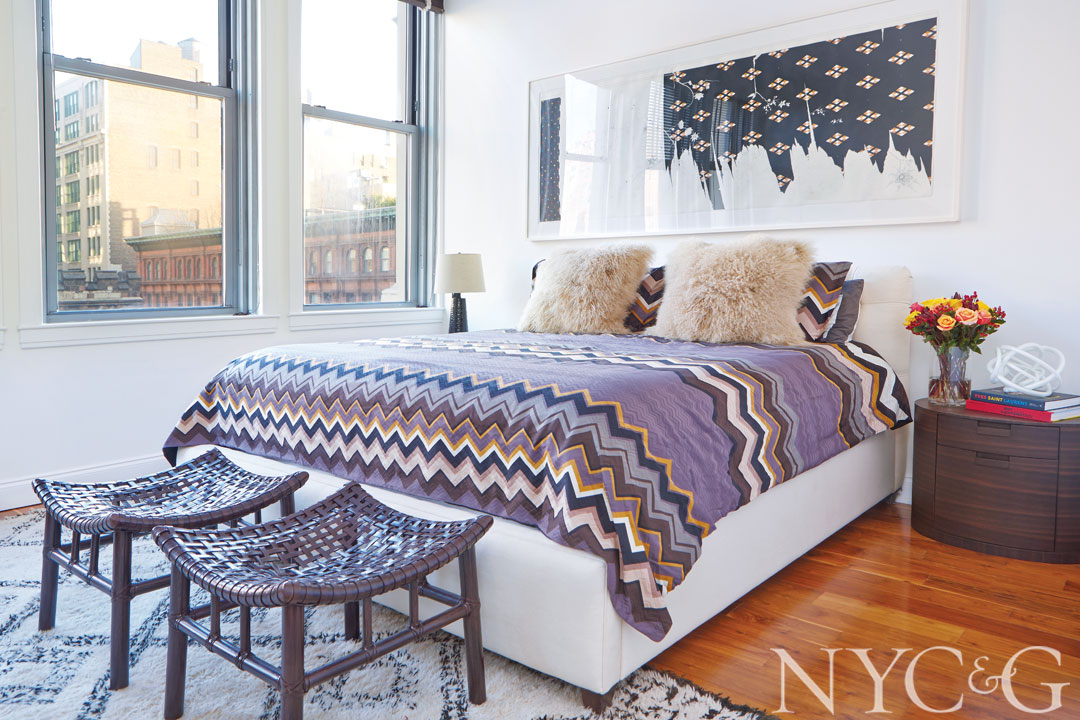 In the master bedroom, a pair of McGuire benches sit at the base of an ABC Carpet & Home bed frame. The linens are Missoni for Target and the throw pillows are from West Elm.