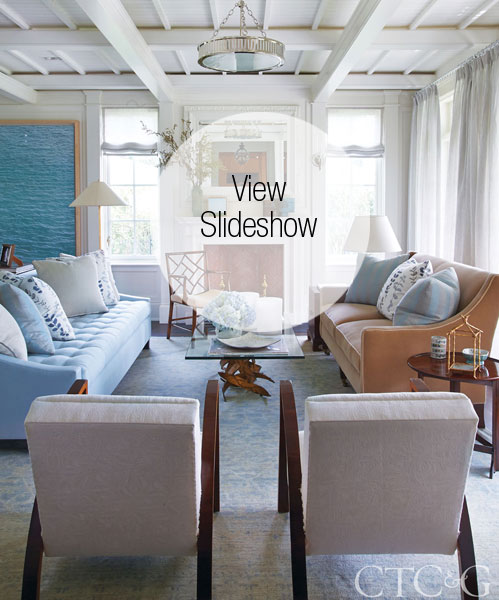 They raised their three children in a fabulous house on several acres of lush woods in Darien; the location had served them well. With two kids off to college, however, and the family dynamic shifting, the desire for a lifestyle refresh came on strong. After almost a year of hunting for that perfect home along the water, their Realtor lured them across town to a narrow lot facing Five Mile River. Awesome view. Awful old house. Though they never intended to build from scratch, the couple knew that with the right team, this could be an everyday retreat worth moving for.

They entrusted the design of their coastal dream house to Austin Patterson Disston Architects, a firm whose work they had admired around town. Mac Patterson was the partner-in-charge of the project. Visiting the site prior to it being purchased, he assuaged his clients’ doubts about the property, assuring them that elevating the terrain would maximize the river view and that judicious landscaping would increase their privacy. Enchanted by possibility, Patterson’s enthusiasm was contagious.

He interviewed his new clients rigorously, detecting clues to their way of living that would inform the size and placement of rooms. “The house is all about how the family uses it,” Patterson explains, factoring in a growing art collection, penchant for casual entertaining, frequent guests, returning adult children, and of course, the location, as he went about thoughtfully appropriating 6,480 square feet of space. The couple yearned for an open and inviting house with sensible rooms that had a purpose for being. To that Patterson replied, “If we make a room a wonderful one to be in, it will get used.”

This undercurrent of luxurious practicality prevailed through the interior design, which was helmed by New York-based Foley & Cox.  On a referral from Patterson, the homeowners met with the designers, whose modern and timeless aesthetic felt simpatico with their vision. Beyond their obvious flair, what truly put the couple at ease was the designers’ genuine interest in preserving family history by repurposing some of their preexisting belongings. For the homeowners, seeing familiar pieces repainted, reupholstered and made cooler was one of the biggest thrills of the entire experience.

Guided by gracious architecture, family heirlooms and the river, Mary Foley and Michael Cox embarked on the decoration. Their approach veered toward a light-handed, unfussy interpretation of traditional, while their conveyance of luxury was subtle. They gravitated toward a gentle watered-down palette dominated by soft whites, blue grays and mineral pales that one might glimpse in the sky at dawn or sunset. They relied on fine sturdy wool fabrics in muted heathery shades and faded neutral rugs to soften the bones of the house. Then they employed sheer uncomplicated window coverings to frame the view but never obstruct it. Furnishings spanned era and style and felt like a personally collected mix, and light fixtures punctuated each room with bold distinction.

At the client walk-through, a Foley & Cox ritual event that serves as a love barometer and signals the end of the project, the designers unveiled their work. Overwhelmed, the couple savored the genius adaptation of their cherished possessions along with a few surprise purchases. “Our goal is for the client to cry tears of joy…and we’ve had a few,” says Foley.

The family reports that their love for the house grows daily and that they feel like they are on a constant vacation. Furthermore, moving to the river presented a fresh perspective on life. This part of Darien, just 10 minutes away from where they once lived, is a different world. “By hour and season,” they say, “the changing waters subtly remind us of time passing and life moving forward.”

A version of this article appeared in the September 2016 issue of CTC&G (Connecticut Cottages & Gardens) with the headline: Go with the Flow.