Inside a Darien Home with European Flair 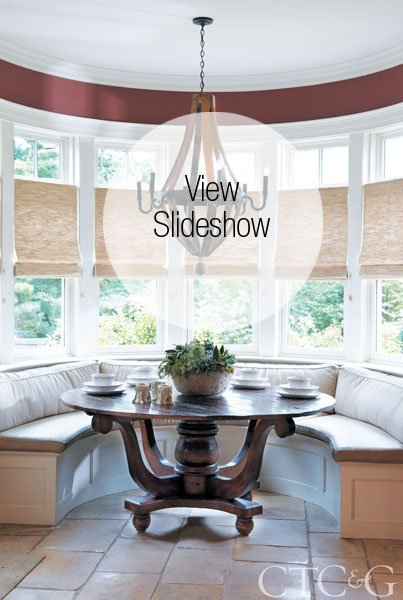 Katie Keith saw the color she wanted for her home’s  powder room sitting in the front seat of a car. A woman Keith had hired to do the decorative plasterwork in her new Darien residence arrived with her pet Weimaraner in the passenger seat. “The moment I saw her dog, I said, ‘That’s the color!,’” recalls Keith. “I just love a color my kids call ‘greige’—and that was the color of the dog’s coat. There’s something about the hue that makes me feel good.”

Keith is one of those people who knows what she wants—and what she doesn’t. What she and her husband didn’t want was the 100-year-old house they purchased in Darien. “It was advertised as a Frank Lloyd Wright–inspired Tuscan villa. Believe me, there was nothing of the house to salvage,”  she says. “So, we leveled it.” That decision freed her to build a home she had long wanted. “As a native New Englander, I have always been a fan of the shingle style. But I wanted it to have some European flair. I love iron and stone, and I wanted to bring some of those elements into an American cedar shingle-style house.”

As the house designed by Stamford-based architect Scott Raissis took shape, Keith became involved in every detail, so much so that when the man hired to weld the iron handrail of the central stairway proved inept and eventually disappeared, Keith did what few homeowners would do—or are equipped to. She put on goggles, fired up a welding gun and started repairing the stairwell. “I’m a union sheet-metal worker,” she admits, “and I know how to weld. The builder and his workers didn’t know that I had the skill to clean up his messy welds.” Eventually, Keith hired a metal worker to do the heavy industrial cutting and shaping.

While Keith supervised the carting away of 65 dumptrucks filled with stone that had been blasted away to accommodate their new house and a hilly garden area complete with a swimming pool and sculptural pergola, she decided that she needed the help of local designer Melinda Tweeddale. “When Katie called me,” recalls Tweeddale, “the big picture of the house was already in place. She wanted my help with the interiors—choosing colors, fabrics, making sure the lighting was right. Plus, she and her husband had moved to Darien from Texas, bringing along some very big, dark, antique furniture, some of which would remain in the house. But a lot of the pieces didn’t jive, and Katie was happy to let much of it go.”

Tweeddale and Keith admit to having become best friends as a result of their collaboration. “I love her taste,” says Keith of Tweeddale. “She likes to push the envelope with color, and she gets very excited when a client releases her to do as she wants. I wanted there to be a surprise awaiting you every time you turned the corner and entered another room.”

“I like for there to be a twist on something you might otherwise say was traditional,” says Tweeddale. In the living room, for instance, she had the fireplace surround covered in a rattlesnake-motif leather. In the sunroom, situated within the ground level of one of the house’s dramatic turrets, Tweeddale had a semi-circular sofa custom-made in a vibrant purple, which she then accented with turquoise and citrus-green pillows. “I love purple and green because those are the colors of nature,” says Keith, who is a master gardener. “People don’t really see the purple in the outdoors, but if you look at shadows, they’re purple.”

Now that the house is complete, Keith appreciates all of the hard work that went into it by her handpicked group. “The people who built this home are a reflection of it. Every one of them had the same positive outlook and sense of soul for the house,” she says. “Collectively, they gave it good karma. They’re a part of this house, too.”

A version of this article appeared in the January 2013 issue of CTC&G (Connecticut Cottages & Gardens) with the headline: Unpredictably Chic.

This article appears in the January 2013 issue of CTC&G (Connecticut Cottages & Gardens).