Inside a Family Friendly Coastline Home 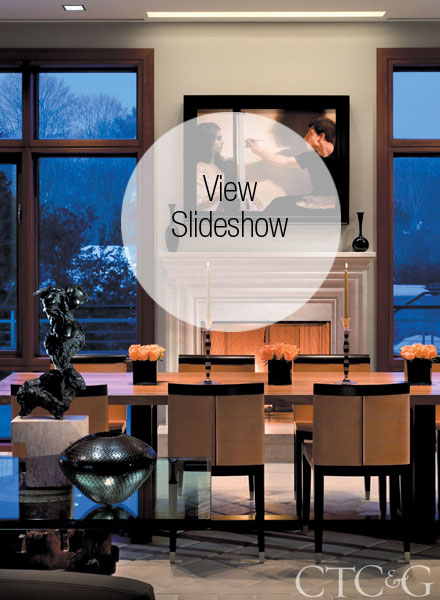 In the early ’90s, a couple bought a home on a rocky stretch of Connecticut coastline. Dramatic views of Long Island Sound helped them make their choice, even though they weren’t entirely in love with the house. Limited by strict shoreline building codes, architect Jo Machinist remodeled the structure’s interior, while keeping the exterior perfectly intact.

Years later, when a neighboring property became available, the homeowners didn’t hesitate to purchase it. Nor did they hesitate to call on Machinist to build their new house—working as both architect and interior designer. “The remodeling of our first house was brilliant. Jo got our sense of style right away,” says the wife. “She invariably brought us fabrics, fixtures and furnishings that we liked.”

The new 5,500-square-foot home is situated on 1.3 acres of private wooded land. Requirements of seven local and federal regulatory boards (from Coastal Area Management to the U.S. EPA to FEMA) influenced the orientation and design of the structure on this former industrial site. “Nowhere is the design process more difficult and demanding than on a coastal site,” explains Machinist. And being within a flood zone required building the first floor 14 feet above sea level. The design resulted in dramatic stair runs, a billiard-room bridge (where the family gathers to play games) that connects the main house to the studio, and a passageway under the house that leads to the Sound.

The homeowners had several requirements for their new abode. In addition to taking advantage of Sound views at every opportunity, they wanted a studio connected to the house, plenty of space to hang art, plus eco-conscious construction throughout. But the main concern was building a home that their children—and future grandchildren—would want to visit often. “Family” became the main theme, with rooms for large gatherings and cozy nooks where the grandchildren might play hide-and-seek. In fact, one of the bathrooms was designed solely with children in mind. Cheery blue tiles and lime-green accessories are partnered with a large tub that’s perfect for bath time. “I hear laughter whenever I think of that room,” Machinist says. The kitchen has a large island so the family can share in meal preparation or just sit and talk. Everything about this home says comfort.

“Architecture is a 3D art form,” says Machinist. “The design of this home has a constant integration of flow between the interior and exterior, with water views everywhere.” There is vertical and horizontal continuity, and the main entry stairway draws the eye from the water to the sky, enhanced by subtle lighting. Throughout the home, there is a juxtaposition of light wood cabinetry—used to create a calming effect—and dark teak window trim, which frames the Sound and wooded views like paintings, making them even more dramatic.

Machinist is proud of the structure’s sustainable design: local quarry granite, radiant stone floors with a high thermal mass, south-facing walls of glass for winter solar gain, which are cooled by solar shading in the summer, and clerestory windows for capturing the ventilating sea breezes. And in response to the shoreline community’s dark-sky ordinance that limits the amount of over-glow from outdoor lighting, Machinist developed a sensitive illumination design with LED lights that define the exterior, and large expanses of window that give a lantern-like effect to the interior. “The mutual respect and confidence I shared with my clients allowed me the freedom to create not only a home, but a unique expression of their personal vision,” notes Machinist.

Probably the greatest evidence of the new home’s success can be summed up in this comment from the husband: “I feel my blood pressure lower every time I come down the driveway to the house.”

A version of this article appeared in the September 2011 issue of CTC&G (Connecticut Cottages & Gardens) with the headline: Bridging a New Life.