Inside a Glamorous Seaside Beach House 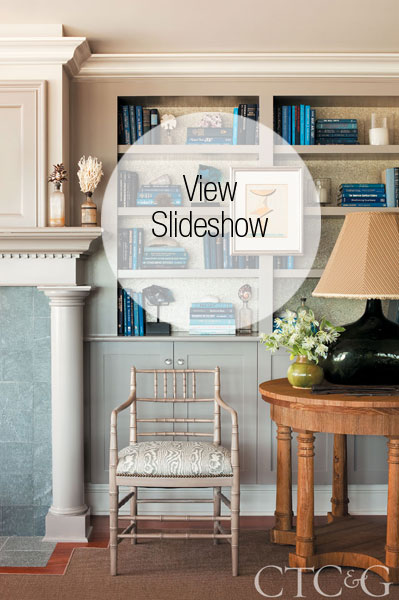 Google the words “iconic New England seaside resort” and the first page to come up is that of the Ocean House in Watch Hill, RI. Built 144 years ago, it is one of the last great Victorian hotels, a true grande dame that holds court (with perfect queenly posture) over the tony vacation town and the impossibly blue ocean. Sadly, like many of her sisters, the Ocean House fell into disrepair over the years and was shuttered in 2003. But a cadre of investors (including a prominent Greenwich resident) had a vision—and deep pockets—that eventually led to its historic restoration; now reopened, it includes 49 hotel rooms and suites and 21 private residences.

Philip Gorrivan was one of nine designers (five from Connecticut) asked by the resort’s owners to design some of its apartments. With a private  terrace and pavilion, his space was particularly alluring, but he feared he would be held to period decorating, Victorian fussiness and all. Instead he was urged to establish a more modern sensibility, and that suited him just fine.

“I went for seaside glamour,” says the New York- and Litchfield-based designer. “I wanted the place to feel modern and also to balance the past.  I worked within the structure of the building, with its quirky architecture.”

Panoramic views of the ocean and bay abound in the corner residence.  Although Gorrivan knew he had to give the water its due, he refused to be slavish to it. “This place is amazing! The sea is literally all around you,” he says, “still, I didn’t want to use too many metaphors,” he laughs. “This is clearly a residence on the ocean, but I wanted it to feel like it could be on any ocean.”

And so Gorrivan infused the public spaces with “a changing palette of blues and lavender,” inspired by myriad hues of sea and sky. He created waves of comfort and style with sophisticated, mostly contemporary furnishings. He used a subtle mix of old and new, and fabrics from his own collection: Philip Gorrivan Design for Highland Court, Duralee. The living room is defined by texture, a touch of zinc here, weathered oak there.

“I think it’s both intimate and interesting. There are things to talk about,” says Gorrivan. “I like a room that has a lot of narrative.”

In contrast, the tranquil master bedroom “transcends time and space,” says Gorrivan. It’s both classic and modern, restful and luxurious, yin and yang—with deeply hued walls and a pleasing pink tufted headboard. The guest bedroom is refined but more playful, a beachy romp with a single wall covered in Hokusai-inspired paper, “which brings in the ocean, with a different color palette,” says Gorrivan. The powder room is a veritable jewel box, with charcoal-papered walls and a red-lacquered vanity that steals the show.

The designer dipped a nautical toe into the overall design, but didn’t go overboard. Surfboards lining the entrance hall serve as functional art;  barnacle-clad bottles sit atop a dresser, a stylized sailboat adorns the wall above the mantel. Of particular note is a marvelous triptych of Gorrivan’s design. Fabricated of laser-cut wood depicting undulating waves, the hanging  panels serve as both room divider and focal point; they’re anchored by weights he found in a marine supply store. “It’s fun to have nautical touches because they’re so nice,” says Gorrivan, “not because you need them!”

The designer was enchanted by the accessory building, windowed on all sides, with long vistas and windows that bathe it in ephemeral light. While many designers might have been tempted to furnish the space with incidental patio pieces, Gorrivan saw the room differently: To him, it was magical and anything but random.

“It may seem a bit strange to some, because its access is restricted seasonally, but I absolutely love it,” he says. “Here’s this turreted pavilion with amazing views … it’s being separate makes it all the more special. It’s a true destination!” Befitting its place of honor, Gorrivan designed a massive round table and placed it at the center of the space; he had it wrapped in rich, purple felt,  its perimeter studded with bronze nail-head trim. Overhead, an antique  fishing net was outfitted with raw Edison bulbs, while sleek Danish  armchairs complete the dining experience.

Gorrivan says he could imagine his own family vacationing here: “It’s entirely different from the way we live in the city and the country. It’s on the water—but honestly it could be anywhere: St. Barts … even the North Sea.”

A version of this article appeared in the February 2012 issue of CTC&G (Connecticut Cottages & Gardens) with the headline: Seaside Glamour.