Inside a Greenwich Home Where Old Meets New 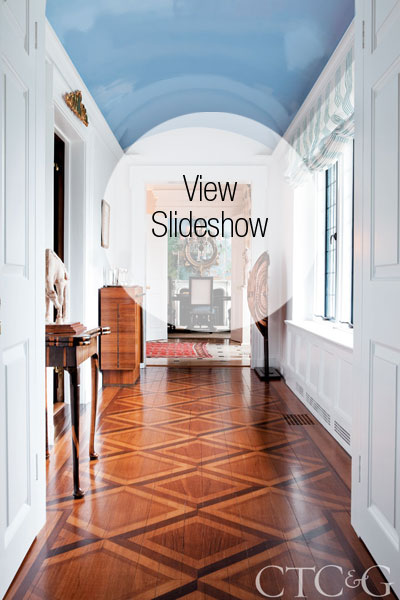 The first thing interior designer Robert Couturier noticed when he entered the classic 1920s Greenwich country estate was the lack of light. “The property had quite a large garden, but everything had grown up over the windows and you couldn’t see out anywhere,” he recalls. “It was very dark, so naturally I wanted to make  everything clean, clear and light.”

That desire quickly translated into a pale blue lacquered ceiling in the hallway and a slightly deeper azure on the living room walls. Besides the obvious sky influence, a suite of Louis IV chairs upholstered in yet another shade of blue in the dining room also drove the choice of cerulean hues that dominate the key main floor living spaces. With his usual flourish, the renowned designer fleshed out the formal dining area with an 18th-century Dutch brass chandelier and a commanding Serge Roche mirrored pedestal from the 1940s.

The Parisian-born Couturier, who catapulted to the top of the design world 25 years ago when billionaire James Goldsmith hired him to design his 60,000-square-foot Mexico home, is accustomed to a sophisticated, world-class clientele. The refined Austrian and his Kentucky-bred wife who hired him to transform their Connecticut digs with a staggering four-month turnaround are no exceptions. “When you have well-informed, decisive clients, you can make decisions quickly and not make mistakes,” notes Couturier, who has done several homes with the couple, and was unfazed by the tight time frame. “Besides, I prefer the energy maintained from working quickly to spending five years on a project and laboring over every detail,” he says.

According to the designer, there was another advantage of working with the same clients over a period of years: “Our tastes have evolved together,” he says. “There was a time when he [the husband] would have insisted on everything being totally traditional, but his feelings about mixing things have changed and so have mine,” Couturier explains. “I like more modern things than I used to, and have come to realize that mixing gives a home a modern feel.”

To emphasize his point, the designer refers to the living room, where an antique Oushak rug provides the backdrop for a rare 1930s German Erdglobus set upon a 17th-century round Italian table. Elsewhere in the room, he deftly combined gilded Louis IV armchairs with a pair of vintage 1950s metal and rock crystal lights. Similarly, in the sunroom, a charming tableaux features a classic English wingback chair paired with a sculpted bronze Buddha, while in the family room an oversized carved African piece holds court with a Louis XIV table and a boldly colored kilim rug.

By his own admission, color is almost a vice. “Someday I would like to do a room in beige and white, but it’s against my nature,” he says. “Besides, clients don’t come to me if they want a white room; they come to me because they love color.” To jazz up the lackluster grand staircase, Couturier lit the way with an antique brass and bronze chandelier and created a dynamic runner by piecing together antique kilims. “You go up and down the stairs every day, so it should be fun, and color adds such joy,” he says.

Saturated shades of red add warmth to the family room—“the official entertainment zone,” says Couturier. And when his client requested an eye-popping coral as backdrop for her tub in the master suite—a hue not seen anywhere else in the house—the designer didn’t flinch. “A bathroom doesn’t need to relate to the rest of the house, because you don’t walk through it to get somewhere else,” he says.

While style was critical, finding furnishings with the right proportions was also essential. “When you have such large rooms and ceilings that are quite tall, proper scale is very important,” he says. “I also chose things that looked purposeful. When we were done, I wanted there to be that feeling that these things had always been there.”

A version of this article appeared in the June 2011 issue of CTC&G (Connecticut Cottages & Gardens) with the headline: The Joy of Color.