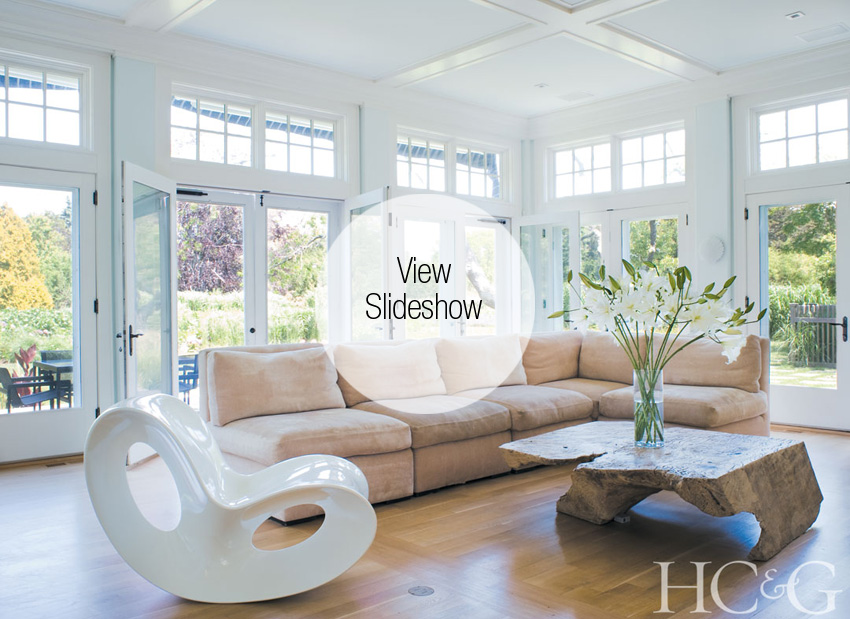 Collaboration is sometimes a loaded idea when if comes to creating a home—especially in the Hamptons. But for Randy Slifka, collaboration was the key to success.

Slifka’s East Hampton abode started out as the carriage house to his late father’s property across the way. “I struggled with the carriage house for almost a decade,” notes Slifka, “because of problems with the concrete slab and the deteriorating condition of the house as a whole.” After interviewing prominent architects such as Robert A. M. Stern and Lee Mindel, Slifka asked architect Andrew Pollock, a childhood friend, to help him build his dream house, where he now lives with his son, Joshua, his wife, Jan, and dogs Lucifer and Kawaii. Their concept incorporated a traditional cedar-shake gambrel exterior that reflects the character of the neighborhood, along with a modern interior that merges outdoors and indoors, while doubling as a showcase for Slifka’s extensive collection of contemporary art.

“Virtually every element was chosen by me,” says Slifka, an asset manager. “I’ve been to 25 or so stone yards; each bathroom has very specific stone and a Venetian plaster that complements it.” Built with art conservation and security in mind, the detail-rich structure includes light wells in the living room and kitchen that bring an evanescent light into the center of the house; generous wall space allows room for numerous video art installations. Other artworks include polished metal rock sculptures by Arik Levy, which double as side tables in the sitting room, a dazzling entry-hall mobile by Pae White, and a sculpted Brazilian hardwood bar from Tucker Robbins. “I know it’s a cliché,” Slifka remarks, “but God is in the details—whether it’s in the hardware, the patina of the wood, the feel of the fabric, or the outside light fixtures. I’ve given every element attention and thought.”

Slifka traces his interest in contemporary art to his grandparents, who were advised on their collection by William Rubin, the former paintings and sculpture curator of the Museum of Modern Art. His first art purchase was a Warhol portrait of himself; recent acquisitions include pieces by Ryan Sullivan, Paul McCarthy, Rashid Johnson, and Laura Owens. “I really believe it is important to support younger artists,” says Slifka. “I’m constantly thinking about how art being made today fits into the history of art overall. I collect what I find compelling and provocative—it has to touch my mind, heart, and soul. One of the great pleasures of building a home is curating what’s inside it. I could never imagine handing over the palette to an interior designer.”

Slifka is equally passionate about the local environment and his garden. More than 20 years ago, thanks to a generous gift from his aunt, he began working with Eric Groft and the late James van Sweden of Oehme van Sweden Landscape Architects to transform the property’s pool garden. “We set out the borders for Randy, knowing that he would then add his own layers to it,” explains Groft. “He’s more of a colorist than I am, and he is willing to make the glorious ‘mistake,’ which is so important in gardening: A plant might die, or you might come out with a winner!” Over the years Slifka has continued this relationship with Groft and is a devoted gardener himself, adding and editing as he sees fit.

With a Groft-devised master plan that separates public and private spaces, the oddly shaped two-acre lot accommodates a host of discrete garden “rooms.” Between the house and garage, along a bluestone path planted with mazus, Slifka “has added an extravagant dahlia garden that is very successful,” Groft says. The lotus pond that practically laps at the edge of the house was planned simultaneously with the architecture of the new house so that they would appear seamlessly integrated. Slifka’s long-standing interest in Asian gardens probably explains the spirit bridge, though he is quick to point out that “it was 100 percent Eric’s idea and brilliance.” And Jan, a certified yoga instructor, often practices outdoors on a platform surrounded by massive Petasites.

“The natural beauty and the spirit of the Hamptons is really what attracts me to this area,” says Slifka, “not the glitz. It’s the inherent natural elements that are wonderful, and it’s nice in my own small way to be able to add to that beauty.”

A version of this article appeared in the August 1 2013 issue of HC&G (Hamptons Cottages & Gardens) with the headline: Randy's Retreat.

A Never Before Available Custom Bridgehampton Home Lists for $16M

35 Kitchen Ideas For Your Next Remodel

Located in the Windy City's historic Gold Coast district, this home got a complete overhaul back in 2014 and then was further decorated by the Environmental Design Group.