Inside a Modern Art-Filled Family Home 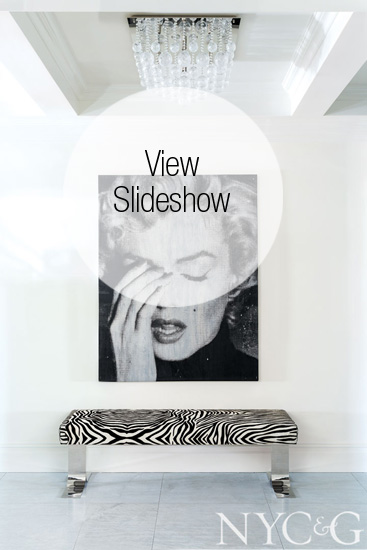 When is a prewar Park Avenue duplex not a prewar Park Avenue duplex? When designer Eric Cohler makes it into something entirely unexpected. In this case, the result is not only more modern, but it looks like the original prewar digs have simply been treated to a light refresh by an art-loving modernist. Everything in this 5,500-square-foot co-op, however, is new—from the gleaming beams in the living room and the softly lit oval cove in the dining room ceiling to the cerused oak paneling in the study, the grand staircase, and the dark lacquered mahogany doors.

“Anything that was here went into the Dumpster,” says Cohler, who is not just a decorator but an art historian and certified preservationist. “In real estate terms, the place was in ‘excellent’ condition when my clients bought it. In my terms, it was ‘terrible.’” In design-speak, that means it was English Country style, and probably not upgraded after the early 1990s. “Those cabbage roses hadn’t just faded—they’d dried up,” jokes Cohler, whose firm’s design director, Tony Klein, oversaw the apartment’s transformation.

While Cohler is sometimes called a traditionalist, it’s a label he disavows. “People see my classical training and think ‘traditional,’ but I am a modernist—just not a cold, remote modernist,” Cohler says. “I like history, but I torque it to today’s sensibilities and needs.” In fact, he adds, this apartment never had the architectural flourishes that make prewar homes so appealing. “It was built in 1927, but it’s not like I tore anything gorgeous or glamorous out of it.” He and Klein did eliminate a lot of walls. “I love tearing out walls,” Cohler says. “I believe in demolition first and question-answering later.” Some of the walls that came down divided a quartet of servants’ rooms, a small kitchen, and a butler’s pantry, all of which evolved into one enormous kitchen that nevertheless is a “pretty standard size for a kitchen anywhere but in New York City.” It’s big enough to eat in, which is certainly bigger-than-usual in New York, and you can look right over the breakfast banquette into the adjacent family room, since yet another wall that used to stand between the spaces is now gone.

From the family room to more formal areas, the five-bedroom apartment flows effortlessly. “The design isn’t all about how people interact with the rooms, but how they interact with each other in the rooms,” Cohler says, emphasizing that the proper dining room (the former servants’ dining room) and spacious living room aren’t necessarily intended just for adults or special occasions. One of the several seating groups Cohler and Klein included is an area with a corner banquette for playing board games on family nights.

Although many Park Avenue apartments from this period are dark, the clients were thrilled to see the light in this project. “Because it was once two different apartments”—a duplex and half a second duplex—“there are windows on all four sides,” Cohler says. “The east-facing windows even afford a decent city view.” Still, he and Klein brought as much light through the inner spaces as they could, with gleaming surfaces and a gallery that runs the 100-foot length of the long north-south axis of the apartment, from the living room to the kitchen.

“The owners are young and cooler than you might imagine,” says Cohler. “When we started, the husband said, ‘We like patterns, so let’s have a lot—pattern on pattern.’” The Cohler team was happy to oblige, starting with a signature graffitied Jimmie Martin “Imperfect” cabinet in the vestibule and an abstract zebra print on a bench under the nearby Russell Young silkscreen of Marilyn Monroe. Some of the pattern is purely textural, like the carpets. The living room rug has a high-pile/low-pile modified Greek-key motif, a floral in the paneled study lends a feminine touch, and a geometric in the dining room sounds a modern note in the apartment’s most traditional room.

Most of the extensive art collection was purchased for the apartment. Cohler, who often works as an art consultant, gave his clients “a kick-start,” he says, but the husband in particular took to art collecting and went on to acquire much of the art on his own. Pieces include Warhol silkscreens, large-scale photographs by the likes of Massimo Vitali, light sculptures, and a squadron of Jeffrey Milstein airplanes.

Upstairs, in Kid World, as Cohler calls it, there had previously been four bedrooms, but he and Klein reconfigured the space to create three en suite bedrooms for the children and an open play area between them. The kids even got to choose their own colors from a palette vetted by their parents. Ultimately, the upstairs is more overtly colorful than the main floor, where hues are muted, but neutrals are colors, Cohler points out, and if you play tones and textures and patterns and fabrics against each other the right way, you can create a lively tableau, a feat pulled off smartly in the master bedroom.

Cohler’s favorite room is the paneled study, an artful sanctuary that features a magnificent Tom Dixon wing chair. “I love that room,” he says. “I could retreat there forever with my books or my iPad or a pen and paper.” But his greatest satisfaction with any project comes from the reaction of his clients to their new homes. There isn’t always a dramatic “reveal moment,” though it would be his preference. “I enjoy watching their faces when they see it finished for the first time,” he says, “when the contractors are out and the family is in and the floor plan has come to life. That’s the real magic of our business.”

A version of this article appeared in the October 2015 issue of New York Cottages & Gardens with the headline: Divine Duplex.