Inside a Modernist Glass House on Noyack Bay 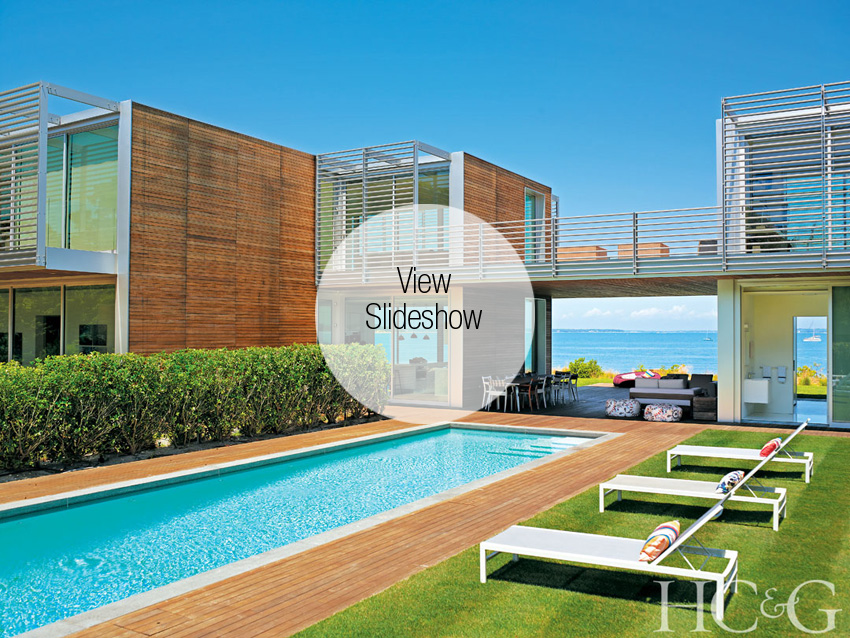 For all its razor-sharp precision, the spectacular modernist glass house on Noyack Bay that Karin Dauch and Massimo Tassan-Solet share with their young daughters came about somewhat by accident. The family had been living in a 1970s house in Southampton, which they spent a year gut-renovating into a charming four-bedroom retreat. “We went through the painful process of remodeling, though we survived,” Dauch says with a laugh. But in 2009, just as she and Tassan-Solet were about to move forward with a bedroom addition and new pool house on the property, Dauch hit the pause button.

“Whenever I drove along Noyac Road, I just got this feeling,” recalls Dauch. “I always dreamed about having a house on the bluff, and had once rented a boat in one of the little marinas on Mill Creek nearby. I remember taking a photo of a tiny beach with lots of sand and umbrellas on a corner around the bay, and I just fell in love with this beautiful spot. So I said to Massimo, ‘Before we commit to the addition, let me look—for one day—to see if there are any houses for sale there. Just in case.’”

Dauch set out with a good friend in the real estate business and inspected ten houses in a single day. Afterward, she continued her research, driving along “pretty much every single street off Noyac Road. I took pictures of every house with a for sale sign, a for rent sign, anything. I photographed the whole coastline of Noyac, just to understand if it really was a little hidden paradise I had discovered, or if I was overreacting. I was in a zone.”

Her quest paid off: Dauch found a nondescript house right on the bay—and just around the bend from the sweet little beach she’d once photographed. Located on a dead-end street with only a dozen or so other houses, the property had sweeping views stretching from North Haven to Shelter Island and Jessups Neck. Convincing her husband, a fixed-income trader and former managing director at Deutsche Bank and Goldman Sachs, to change course wasn’t difficult: Tassan-Solet is an avid windsurfer and boater, as is Dauch, a journalist and a board member of the New York–based BrazilFoundation. The new property boasted a small sandy beach with easy access for boards and sails. The deal was done. The couple scrapped the planned additions to their existing home and moved full speed ahead with the new location.

To design their dream home on the bay, Dauch and Tassan-Solet called on their friend architect Roger Ferris. (Coincidentally, Ferris designed the Bridge, the exclusive golf club in Bridgehampton where the couple are members.) “I knew I wanted to have a glass house, and not just in one piece—I wanted a series of pavilions,” says Dauch, who also sought to adapt the easy indoor-outdoor style of living in her native Brazil to the East End. “In Brazil, most beach houses are surrounded by porches or terraces. You live outdoors. Roger was really good at translating our ideas into architecture.”

Ferris, principal of Roger Ferris + Partners, the architecture firm also responsible for Bridgehampton’s new Topping Rose House, jokes that his mandate was “not to screw up the site and the view. I didn’t want the house to be self-conscious, like so many contemporary houses can get. There’s a point where architects struggle with simplicity, thinking ‘I’ve got to do something more.’ Here, we didn’t labor too much.”

The pavilions that make up the residence—a main house separated from a pool house and office by an outdoor living area, plus a freestanding garage and guest suite—are simple and crisp and vaguely nautical, with slatted walls and decks of Brazilian garapa wood and large expanses of glass screened by aluminum louvers. Inside, it’s all whitewashed walls, free of moldings and trim, and pale oak floors. It’s a clean, luminous backdrop for Dauch and Tassan-Solet’s contemporary art collection, which includes a number of pieces by Robert Wilson, whose annual Watermill Center benefit is a summer highlight for the couple.

Befitting Tassan-Solet’s Milanese roots, nearly all the furniture is Italian, from such top design houses as Minotti and Moroso. “Massimo and I have the same aesthetic sensibility: modern, clean, minimal,” Dauch says. “Even in our New York apartment, we have a ‘no-stuff policy,’ meaning no clutter, no mess. We have lots of books, but there are no tchotchkes anywhere.”

Everything about their new home suits the family to a tee, especially the location. “We are exactly two miles from the Bridge, where Massimo plays golf,” reports Dauch. “Our boat, Caipirinha, is in a marina across the street, and we’re close to Sag Harbor, which has always been our favorite village.” Her last-minute search for an idyllic waterfront spot was definitely worth the effort. As Dauch puts it, “My vision totally came true.”

A version of this article appeared in the September/October 2013 issue of HC&G (Hamptons Cottages & Gardens) with the headline: Modern Family.