Inside a Modernist Quogue Home 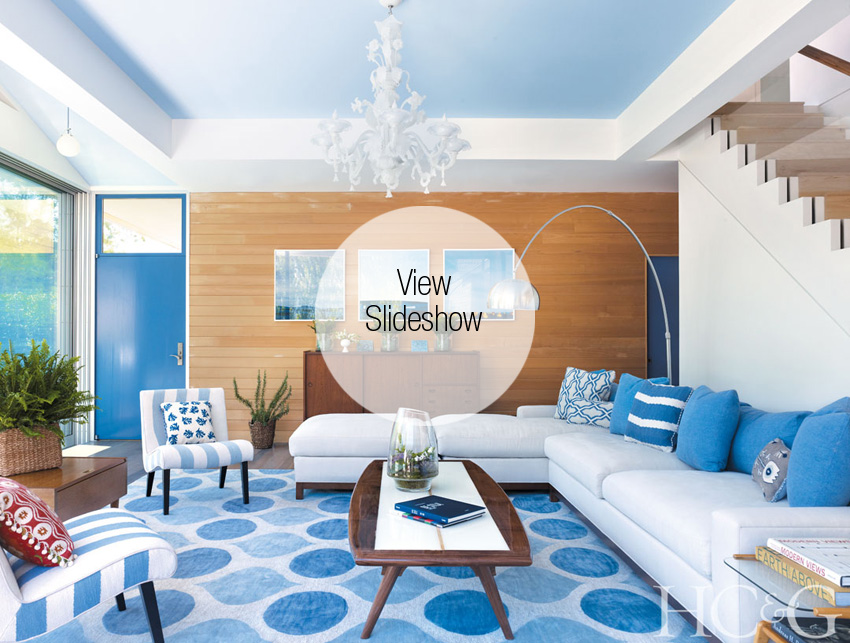 “This is a major departure for me,” Disston says of the 3,500-square-foot retreat where he, Gatfield, and her 13-year-old daughter, Ella, spend summers and weekends throughout the year. “You could almost call it my mid-life rebirth as a modernist.” A graduate of Syracuse University’s School of Architecture and current member of its board, Disston credits his association with fellow board members and well-known contemporary architects Fred Stelle (of Bridgehampton-based Stelle Architects) and Richard Gluckman (of New York–based Gluckman Maynor Architects), among others, with his turn toward a sleeker style. “I’ve always loved modern architecture, and I wanted to do more of it. This seemed like a great place to start.”

Composed of a series of stacked rectangular volumes that loosely form an “L” shape, the structure more closely resembles a sophisticated Lego construction than the square-plus-triangle form typically evoked by the word “house.” Clad in horizontal cedar timbers, punctuated by square and rectangular windows, and topped with a flat roof (from which solar panels and a rooftop deck peek out over the edge), the house doesn’t have a single curved, or even diagonal, line on the exterior. Glass doors on the ground level slide all the way into the walls, not only opening the family and living rooms to the pool and backyard but also creating the illusion that the top story, which houses the library and three bedrooms, floats above.

The house’s interior also reflects Disston’s evolution from traditionalist to modernist, though two features pay homage to historic architectural motifs: timber framing upstairs, such as the beams in the library, and the fireplace in the family room downstairs. Inspired by British contemporary artist Rachel Whiteread, who makes plaster casts of historic rooms, Disston used an antique mantel to make an imprint in white concrete in the shape of a traditional fireplace. “It’s sort of like a fossil of an old house, like a salute to the historic homes in the area,” he says.

A playful dialogue between past and present appears throughout, from an ornate Murano milk glass chandelier to mid-20th-century chairs upholstered in kilims designed by Gatfield’s Quogue-based company, Custom Cool. “That’s our version of thumbing our nose at the rigors of modern architecture,” says Gatfield, who has had her own on-again, off-again relationships with both modern and traditional styles. “As an architecture student at Rhode Island School of Design, I was a modernist through and through,” she says. “But as I matured and lived all over the world, I became enamored with more decorative details and traditional style. When Stuart said he wanted to do a modern house, I was initially against it. But then I fell in love with modernism all over again.”

Gatfield, who describes her approach to color as “fearless,” is responsible for the pops of blue and orange that enliven the cedar paneling and white-painted walls (she had wanted red, but settled on the lighter hues at Disston’s suggestion). “The color makes the house not as uptight as most modern homes,” she says. “It’s more real—you can actually imagine spilling something here.”

The couple agreed on at least one thing from the very start: the furnishings. Among them are a considerable collection of Scandinavian mid-century-modern furniture and contemporary artwork, in addition to pieces made by the duo themselves. Disston designed the living room coffee table, made of walnut and fiberglass, and the bed in the master bedroom, while Gatfield designed most of the textiles in the house, from the living room rug to the dining room place mats. Many of the paintings are works by Disston, too.

Now that they’ve just settled in, the couple are currently at work on another year-round house in Bridgehampton. Plans for this home call for a more traditional style, so does that mean their experiments with modernism in Quogue might turn out to be just a summer fling? Only time will tell.

A version of this article appeared in the August 15 2012 issue of HC&G (Hamptons Cottages & Gardens) with the headline: Modern Romance.