A stylish couple decides to buy (and design) in the city of lights. 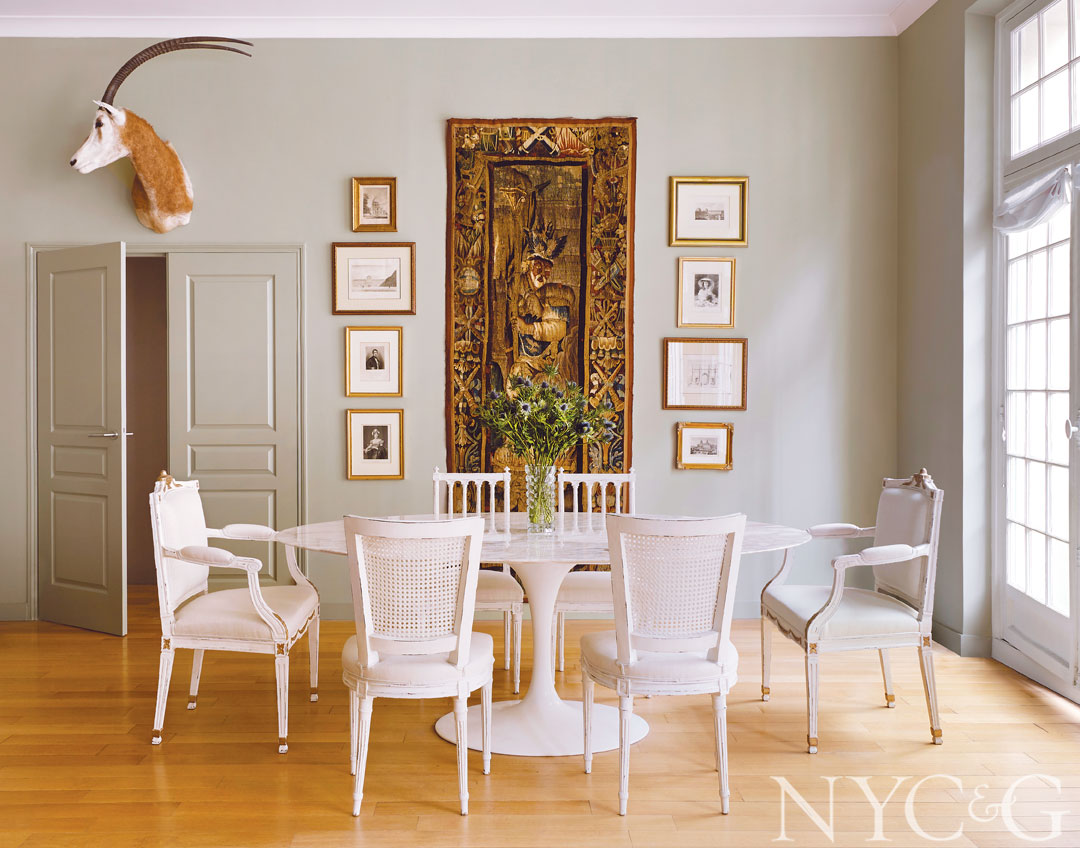 Ramzi Abufaraj and Keith Nuss were en route to Paris when Abufaraj noticed an ad in Air France’s in-flight magazine for a renovated 19th-century Haussmannian building that was being gutted and divided into modern apartments. “I took one look at the row of Juliet balconies facing the street,” recalls Abufaraj, a gregarious art- and history-loving real estate investor who is originally from Lebanon, “and I said to Keith, ‘We should live here.’”

Abufaraj fell in love with Paris on his first visit, in 1981. “Lebanon was in the middle of its long civil war,” he remembers, “and Paris was the first place I ever actually felt at home.” Two years later, he immigrated to the U.S., settling in Georgia, where he subsequently earned an architecture degree. Soon afterward, he was offered a job overseeing the renovation of the Arms and Armor galleries at the Met, so he moved to New York. In 1999, he met Nuss, a Brooklyn-born fashion executive; the pair married in 2012.

Nuss, having acquired a deep affection for the City of Light during his many visits with Abufaraj, was keen on the idea of a pied-à-terre, although the two enjoy grand hotels and had never even considered buying a place of their own. But the next day, they were off to the Marais for a look. 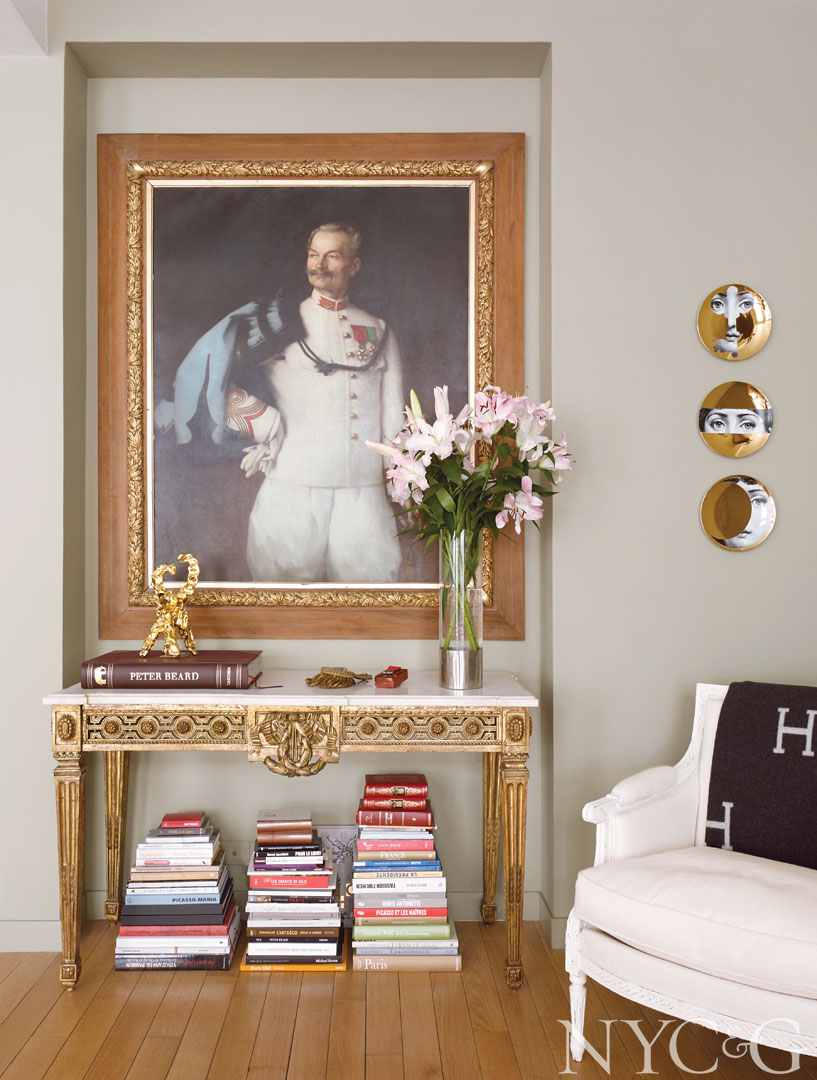 “There was a tiny office in the lobby,” says Abufaraj, “but the rest of the building was a construction site. I told the guy at the desk that we would love to see the plans for the third-floor unit with the run of balconies, where they were planning a three-bedroom apartment with two-and-a-half baths.” Abufaraj redesigned the unit on the spot, eliminating the master suite and rearranging the doorways in order to open up the space into one huge living and dining area. “I told the rep that if he could get the owner to accept the changes, we would take the place at full asking price.” In just a few hours, the developer had agreed.

Two years later, the apartment was delivered—but without a kitchen, which is not uncommon in Europe. The couple outfitted it with custom lacquered Italian cabinetry, an Arabescato Carrara marble countertop, and a brushed-stainless-steel backsplash. The functional, yet tiny space also accommodates a petite Italian pedestal table for morning coffee and a pair of Arne Jacobsen chairs festooned with a Keith Haring graphic. 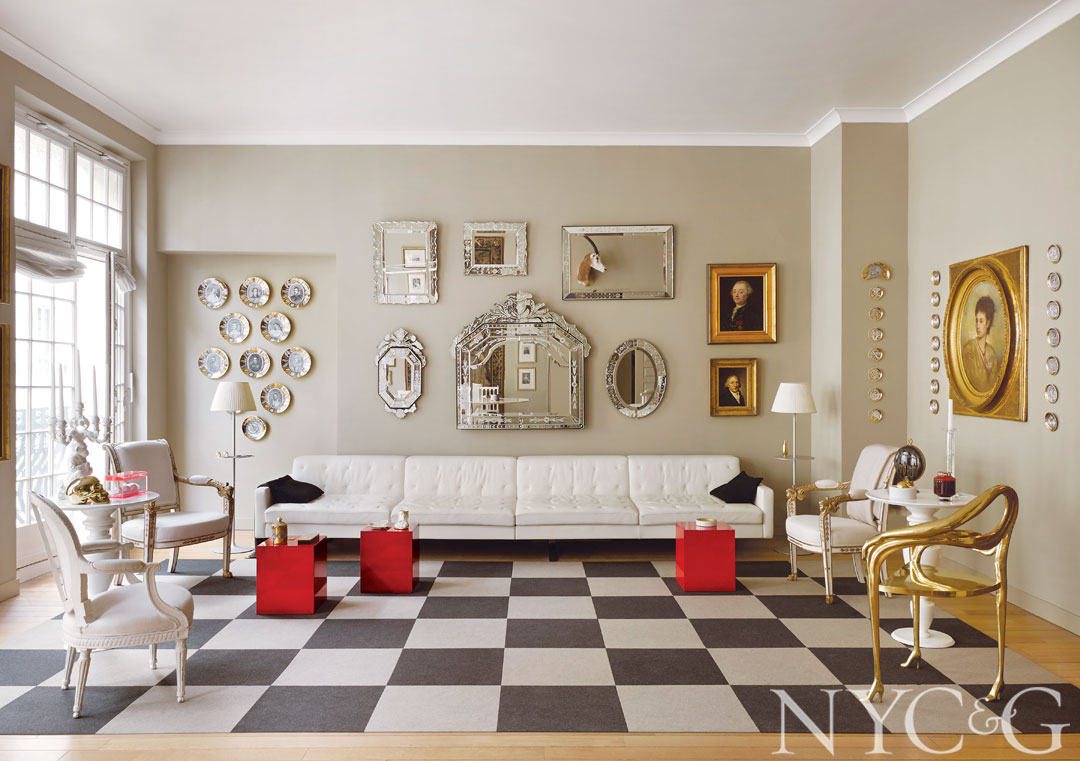 The building, which had originally housed printing shops, lacked elaborate architectural detail, and the renovation was clean and unadorned. Fine by Abufaraj and Nuss: Their preferred style had always been white-on-white minimalism, although over time they have gravitated to Farrow & Ball’s Light Gray (No. 17) paint, because it makes an ideal backdrop for their collection of black-and-white photographs. “You could call it light gray during the day,” says Abufaraj, “but it has a lot of green in it, so it can look almost like khaki. At night, it’s darker gray.” They introduced the hue to their walls in Paris and began to wean themselves from blanc sur blanc decor.

Paris is famous for its markets, and the intrepid shoppers mined them deeply for accessories and furnishings. Filling out the French-inflected mix are precisely replicated antique chairs upholstered in Belgian linen, which pose like aristocrats waiting for a royal audience. The paintings are all French, including two anonymous red-coated military officers in the living room. (Abufaraj and Nuss purchased them at the Stair Galleries in Hudson, New York, then flew them home to their country of origin.) The military scheme is echoed in the palette, which manages to evoke an old dress uniform—like that of a Napoleonic dragoon, complete with a red-plumed brass helmet.

“It was fascinating to watch Ramzi working,” says Nuss, who happily cedes design leadership to Abufaraj. “He was clearly trying to discover what the place wanted to be, to find the balance between this very old building and its modern interior.” As for Abufaraj, he found the process a metaphorical as well as a literal look in the mirror. “Designing this place,” he says, “taught me things about myself that I never knew.”