Inside a Park Avenue Prewar With a Cool California Vibe 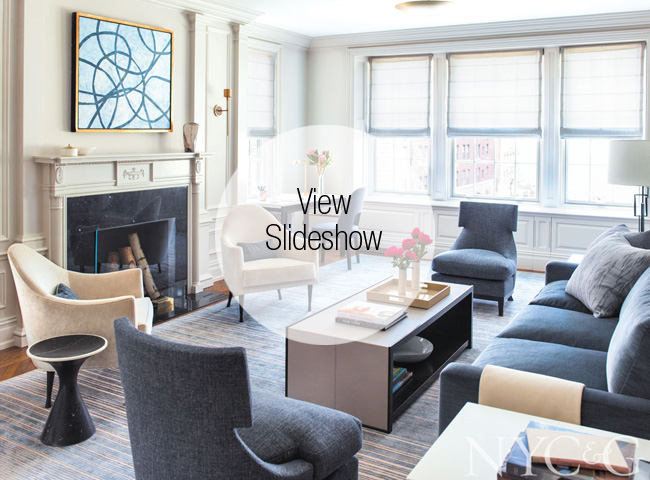 Tiburon, California, is the kind of town people fantasize about living in: With mountains rising in the distance and generously scaled homes built into a hillside overlooking San Francisco Bay, it’s an idyllic spot that recalls the Mediterranean coast. So when the general counsel for a financial services firm was transferred from Tiburon to Manhattan, she and her husband, a New York Times best-selling author, were adamant that they not lose sight of their breezy California lifestyle after making the big move to the Big Apple. With two teenage daughters in tow, a large dog, and a tight renovation/redecoration timeline, the challenge was that much greater.

The couple hired San Francisco–based decorator Matthew Leverone of Leverone Design to take on the job. “They wanted a chic home, but with a casual California sensibility,” says Leverone, who has worked on several projects for the family. Their new residence, a 2,800-square-foot apartment in a 1920s Mott B. Schmidt–designed building on Park Avenue, was a decided departure from their Craftsman-style home in California, which made sourcing furnishings and fabrics more difficult. Leverone started by crafting a color palette that recalls the family’s Tiburon home, with slate blues, dove grays, and pale earth tones that work in both laid-back California and buttoned-up Manhattan. He then added pieces with both aesthetic appeal and a dose of practicality. “My clients love 20th-century design, but they were mostly concerned with wear and tear. They wanted sensible furnishings that would age well.” In the bright, vaulted entryway, a circa-1958 Angelo Lelli frosted-glass chandelier and a parchment console with matching leather stools are a case in point, a soothing introduction to the smart spaces that lie beyond.

The family entertains often, so Leverone fashioned a living room that could stand up to consistent use. “To get a more relaxed look, we used contemporary furniture as well as matte and shiny textures and fabrics,” Leverone says. “It brings a modern touch to the apartment’s strong architecture.” Witness the pair of vintage Paul McCobb club chairs in platinum velvet that sit opposite a custom cobalt mohair sofa, flanked by two Roman Thomas slipper chairs covered in a soft Rogers & Goffigon linen and wool. The master bedroom is an utterly tranquil sanctuary, where a custom linen-wrapped bed and ottoman are accented with a coverlet in “shades of ecru and sky that keep the courtyard-facing space neutral and calm.”

The casual library and dining area directly off the kitchen also acts as a breakfast nook, as the husband’s workspace, and, in the evening, as a place where the family can kick back together on the sectional. Leverone chose a teal fabric for the sofa, as well as a brown leather for chairs from Jayson Home—colors that resonate with the family’s California roots. Photographs of the Sea Ranch, a bucolic seaside community in Sonoma County where the family maintains a second home, hang behind the sofa.

“I’ve always wanted to decorate a classic New York City apartment,” says Leverone, “so this was a dream project. Most important, the family feels settled, and the rooms are truly reflective of their lives on both coasts. I’d call it a success!”

A version of this article appeared in the Holiday 2015 issue of New York Cottages & Gardens with the headline: Coast to Coast.