Inside a Reinvented 1965 Sag Harbor Home 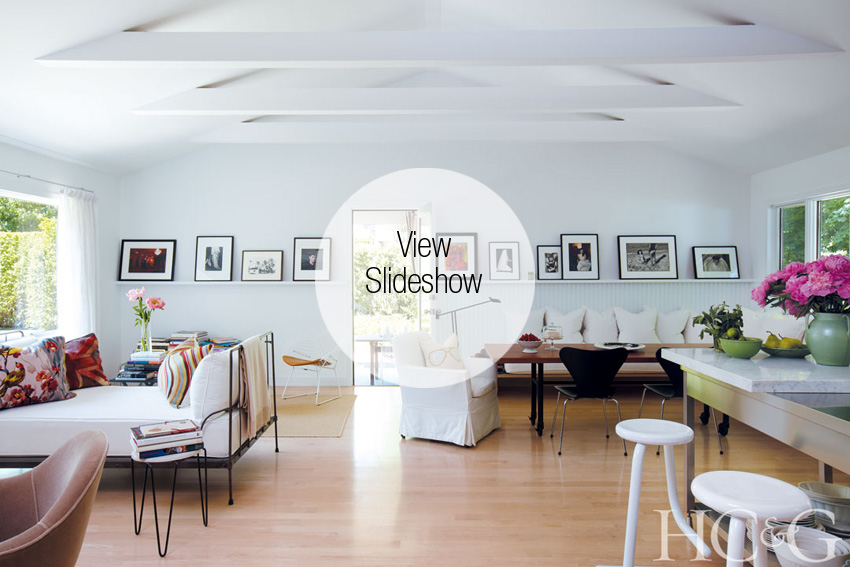 For 12 years, Susan Penzner lived in a classic Greek Revival house on Sag Harbor’s Madison Street, followed by a series of charming rentals, all decorated with antique linens and red-and-white transferware that she found in Moroccan souks and Paris flea markets. Until three years ago, she also sold vintage clothing out of her Sag Harbor shop, Havens House, which was big on Victorian whites.

Today things are a bit different. Penzner, an HC&G contributing editor, now lives in a rehabbed 1965 ranch hidden behind a high privet hedge on a choice waterfront street—though she still has a penchant for linens and transferware. “It was time for a change,” she says, but change didn’t come easily. By the time the long-renting Penzner, who is an independent real estate broker in SoHo and also works with Saunders on the East End, decided to buy a house about six years ago, the market had outpriced her. “I decided that if I couldn’t have a historic house, I would take a ranch, but it had to be in the finest village location.” One winter day, she got a call from a broker she was working with. “He said, ‘Get in your car and come out here.’”

The house, possibly built from a kit, was a catalogue of 1960s construction horrors: hollow-core doors, vinyl asbestos floors, plastic paneling on the walls, dropped ceilings. “But the light was exquisite, and it didn’t have squooshy little ranch-house windows,” Penzner recalls. Rather, its floor-to-ceiling windows gave the place California-style, indoor-outdoor potential. Penzner called upon her friend Jack Ceglic, a well-known industrial and architectural designer who has a home in East Hampton, to take a look. His reaction, as she puts it: “I’ll work with you on one condition: you don’t turn it into a Hamptons cottage. No pine floors, no vintage mantelpieces, no herbs hanging from the rafters. This is a 1960s house, and we’re going to keep the integrity of it.” After a yearlong gut renovation, the once-dreary house is now bright and open, stylish and pristine—a smoothly functioning, 1,200-square-foot machine for modern living.

The footprint and window positions remain essentially the same, but dropped ceilings were removed and walls torn down to accommodate a sleek open kitchen, with no upper cabinets, that has been seamlessly integrated into the soaring white living/dining space. Where once there were two oversize bedrooms, now there’s a master suite with a luxurious bath, a pantry/ laundry room (the fridge hides in an adjacent alcove), a smaller guestroom with its own bath, a coat closet and an additional powder room. Behind the fireplace—left in its original spot, but stripped of Sheetrock to reveal its quirky asymmetrical construction—is a home office and library. The floors are warm, glowing maple, which Penzner decided was the right choice after studying pictures of California’s famous mid- 20th-century Case Study houses. (She had rejected Ceglic’s initial suggestion of white vinyl or cork as “too masculine.”) Outside, a carport was re-invented as a chic outdoor dining room, with a gravel floor and taupe Sunbrella drapes.

Everywhere in the cohesive, shipshape space, Ceglic’s trademark attention to detail and resourceful use of materials are apparent. Pocket doors (where there are doors at all) save precious inches throughout; a wall of closets in the master bedroom is hung with vintage white linens, in lieu of doors, on space-saving hospital tracks. Ceglic also designed banquettes for seating and a long wood dining table on casters; among the minimal furnishings Penzner bought for the house are two contemporary Italian beds and an Eero Saarinen pedestal table. Her photography collection is arrayed on a long shelf that limns the living/dining area. “It’s a moving display,” she says. “I don’t like to put holes in the walls.”

A version of this article appeared in the August 1 2011 issue of HC&G (Hamptons Cottages & Gardens) with the headline: Ranch Revamp.