Inside a Renovated Ehrick Rossiter Home 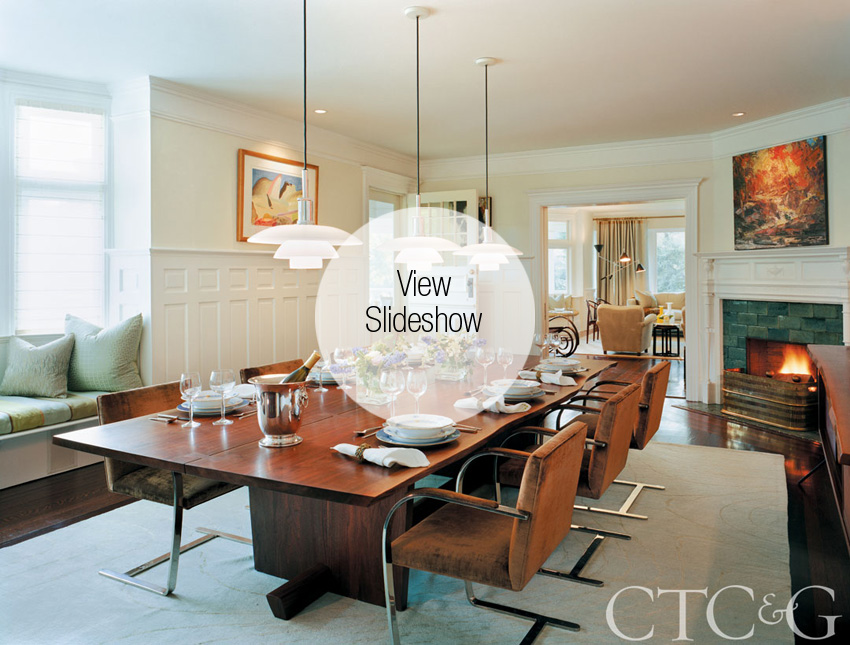 I am met at the front door of Barbara and Gene Kohn’s home in Washington by their loud but friendly dog, Allie, who retreats to one of the many cozy corners of the 6,600-square-foot home. Named “The Sumacs,” the house was designed by Ehrick Rossiter and built in 1894 for the artist William Hamilton Gibson. Rossiter worked in the late 19th and early 20th centuries; he created or restored a number of historically and architecturally significant buildings in Litchfield County, including his own home, known as “The Rocks,” and the well-known Mayflower Inn.

Barbara and I sit in the music room of the six-bedroom, six-bathroom estate that is located close to The Gunnery in a town where residents are quite happy for time to stand still, at least on weekends.

“We used to visit the area quite often,” says Barbara, cofounder of Paul Kohn design, whose husband is a noted commercial architect. “We loved it up here and decided to buy some land. My husband, Gene, and Reese Owens were working on a design for a home when we discovered this house was for sale. We loved the details of the interior, and it felt good … had good bones. We bought it the next day.”

It needed some work, as they say. But the couple, along with Owens (a principal of Halper Owens Architects, LLC, who was mentored in his craft by Gene Kohn) and James Churchill (of Churchill Builders, general contractor for the renovation) rolled up their collective sleeves and dug in.

Owens found The Sumacs to be well preserved. “One hundred-plus-year-old wood buildings are never perfect,” he says. “But this one had retained most of its character and defining features, such as fireplaces, stairs and interior woodwork, and exterior trims.” He feels Rossiter’s houses stand up to tight scrutiny. “That’s saying a lot, given that they were designed as summer cottages. They have the usual tiny closets and inadequate bathrooms and kitchens by today’s standards, but the arrangement and hierarchy of spaces is elegant and appropriate today. His houses all engage the landscape beautifully.”

Adds Churchill: “Everyone who worked on the project was respectful of the fact that it was historic. All mechanicals were redone without disturbing the original design.”

The Sumacs has a subtle elegance; its exterior gabled, with shingle and stone meshing to form a warm and inviting appearance. Barbara Kohn adorned the understated, mostly white or off-white walls with original art, some created by her husband. Stunning pieces, such as a Steinway piano in the music room and a Mira Nakashima walnut table in the dining area, which is outfitted in a mostly Oriental motif, serve as dynamic centerpieces and reflect the couple’s taste for things both antique and modern.

The first-floor rooms flow into one another without wasteful connecting corridors. One of the most pleasing elements of the home is a wide staircase leading from the music room to the second floor. The railings on the stairs have original white spiral posts.

The three-storey house is infused with natural light during the day. The rear of the home faces south, and Rossiter had incorporated large (many of them curved) windows into the rooms. The upper level has several bedrooms for guests and a large activity room. The second floor includes a master bedroom, a roomy bath, a large office and a paneled library. The first floor has the music room, a living room, dining room, a small pantry and a spacious, modernized kitchen, as well as the add-on sunroom.

Much work was also done to the seven acres surrounding the home, including the installation of a pool, restoration of a tennis court and landscaping to create a well-rounded, vibrant lifestyle venue for the homeowners.

OK, what about that name?

“I’ve looked and looked and I can’t find any sumac on the property,” laughs Barbara. A minor detail to be overlooked when owning such a historic and one-of-a-kind home.

A version of this article appeared in the March 2012 issue of CTC&G (Connecticut Cottages & Gardens) with the headline: The Sumacs.