Inside a Renovated Historic Carriage House 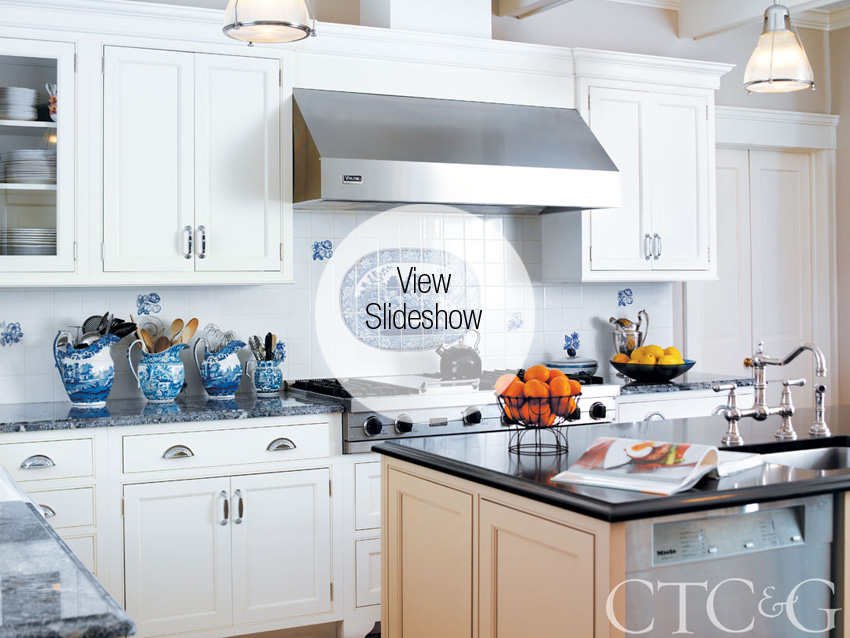 After 18 years in their 19th-century carriage house, Katie Brown and Bill Gedale decided it was time to set things straight—literally. The historic residence on four acres, where they raised a blended family that included four teenagers, oozed charm but none of the doorways lined up. And not a single space highlighted the carefully conceived gardens designed by Brown, a veteran landscape designer. Add to that a dysfunctional kitchen: “When you opened the dishwasher, it banged into the island,” says the homeowner.

“It was our interior designer Lyn Peterson’s idea to align everything so you could actually see through to the kitchen when you entered the house,” says Brown. “We maintained the allure of the existing structure, but now the spaces work and flow much better.”

In lieu of redoing the kitchen in the existing footprint, architect Paul Benowitz suggested pushing the breakfast room out and up. Those few extra feet, coupled with a bank of twelve-paned windows, put the kitchen and its owners in the garden where they belonged. “I immediately starting hanging feeders in the trees,” says Brown, who enjoys bird watching with her husband during breakfast. “This room is where we live.”

Complementing the lush hydrangeas, peonies and roses outside is a kitchen palette designed around the blue Bahia granite countertops. The indigo hue repeats on the backsplash with an 18th-century English Transferware pattern above the stove and random smaller tiles embellished with design details from the owner’s china collection. “I hired an artist to make them,” says Brown, who found the Transferware image at a local library.

Meanwhile, Peterson put an old Welsh pine cupboard to work as display space for the couple’s porcelain collection, and added custom chairs with a subtle blue striped fabric as seating in the breakfast nook, where the vaulted ceiling further brightens the room. “The high ceilings offer a welcome change from the stone walls and low ceilings in the rest of the house,” says Peterson. “It’s a point/counterpoint moment that makes the transition exciting.”

Equally thrilling was the creation of a potting room. “There was an existing flagstone walkway with two side walls and all it needed was a roof,” says Brown. The addition of an oval window and a Dutch door that opens to the garden elevated the tiny room to jewel box status.

Throughout the home, an easygoing attitude toward color and pattern, along with the owner’s art and antiques, made for highly personable spaces. In the parlor, Peterson paired a wingback chair and settee with bright Oriental rugs. The terra cotta and blue in the rugs and the homeowner’s European sensibility drove the room’s decor. “In most American homes, furnishings are heavily curated and have to be placed just so. But Europeans will stick a chair under a window because it’s where they like to read,” says Peterson. “It’s that kind of confident casualness that embodies this room and the entire house.”

That philosophy was evident years ago when the homeowner upholstered the living room sofas with a lively red floral print, turned an old French gate into a coffee table, and covered her grandmother’s armchairs with an animal print. In contrast, the guest room headboard and window coverings are a result of her instant attraction to a serene aqua floral fabric.

According to Peterson, it’s the home’s architecture and the homeowner’s attitude that lend themselves to such a relaxed design plan. “These are discreet rooms that allow for different colors and lots of independent ideas,” she says.

A version of this article appeared in the January 2013 issue of CTC&G (Connecticut Cottages & Gardens) with the headline: Newly Aligned.

This article appears in the January 2013 issue of CTC&G (Connecticut Cottages & Gardens).