Inside a Richard Meier Home Updated by Stamberg Aferiat + Associates 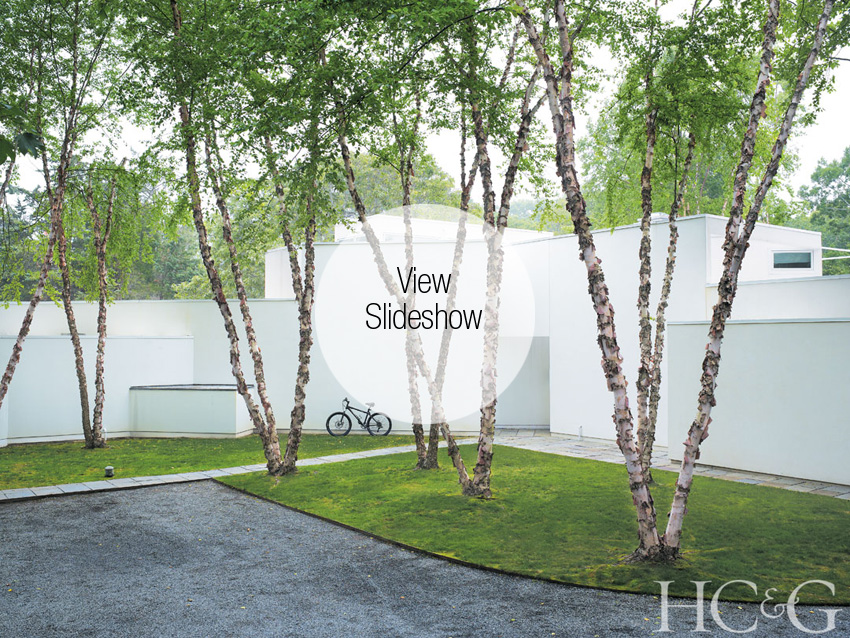 The Hamptons is celebrated for its grand shingled mansions, but one rather modest house stands apart. Its brave modern lines, shaded by a birch grove, attract a steady stream of roadside gawkers peering through tall bayberry hedges. They “are probably ready to throw mud” at the all-white house, jokes its owner, Anita Hoffman.

Her place has its partisans, too. Architects uniformly adore it, and Hoffman vividly recalls the day former New York Times architecture critic Paul Goldberger pedaled over on his bike for a tour. Still, many who admire the architectural achievement may not know its back story. The original part of the house, a central two-story volume erected in 1968, is one of the most important early residences designed by world-famous architect Richard Meier. Since then, it has been expanded on two separate occasions by New York–based Stamberg Aferiat + Associates.

The house would not exist at all, in any form, were it not for Hoffman’s keen eye. Born in Romania, she moved to the United States while still a girl and first visited East Hampton at age 16. As a young working mother in New York City, she decided to build a weekend escape on the East End. It was her husband’s plan for a French château that gave her pause. When a magazine published pictures of a house that Meier had done for his parents, something clicked. “I said I’d like a modern house,” Hoffman recalls, “and my husband was amenable because he liked my taste.”

As luck would have it, he had grown up with Meier in New Jersey. The architect drew the couple a tight, contemporary house sheathed in painted plywood. Drama would come from the plan’s daring diagonals and a fireplace recalling the legendary Swiss architect (and Meier hero) Le Corbusier. The double-height living room promised to be glassy and bright. “On a night with a full moon, you can read a book without the lights on,” Hoffman confirms.

Just 2,000 square feet when first built, the house lacked the suburban luxuries now considered de rigueur at the beach. “McMansions say, ‘Look how much money I’ve earned,’” Hoffman says. In the manner of the 1960s, Meier had skimped on extra footage for the bedrooms, on the assumption that they would be used exclusively for sleeping.

Following her divorce, Hoffman found herself wanting to add more space, new windows, and stucco to replace the original siding, which had become degraded by the salt air. She approached Meier, who graciously suggested she give the job to architects Peter Stamberg and Paul Aferiat (the latter had once worked with Meier). A 1,000-square-foot addition enlarged the kitchen and supplied Hoffman with a proper master bedroom. She calls it “Nana’s grandma suite.”

Once her three children married and started having kids (Hoffman now has eight grandchildren), her growing family took to arriving en masse each summer. Hoffman asked Stamberg and Aferiat for yet another addition, which produced a trio of new “grown-up bedrooms,” bringing the total to seven—though still a far cry from McMansion territory. “We kept the height of the additions to one story, lower than the original house,” says Stamberg, “so that Richard’s original design would predominate.”

In 1968, Hoffman recalls receiving a sponge and Ajax as a housewarming gift, along with a note commending her bravery for using so much white in a family house. “But you can see where the white gets dirty and clean it right away,” she still argues today. “The walls remain almost entirely bare,” adds Aferiat, “so as not to detract from the beautiful landscape outside.” In their dedication to minimalism, he and Stamberg think of Hoffman and Meier as
kindred spirits. But that’s not all. Meier lives in a scrupulously spartan house just down the road and remains a friend.

A version of this article appeared in the August 15 2013 issue of HC&G (Hamptons Cottages & Gardens) with the headline: White and Bright.