Inside a Shippan Point Home Designed by John Howe 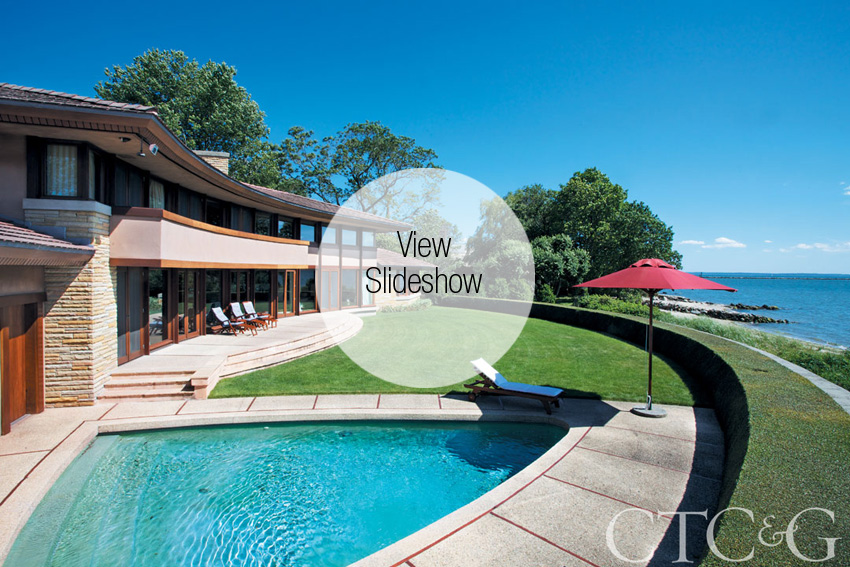 The homeowner says from his second home in Hamburg, on a cold and rainy northern German day. He is explaining how he got his hands on a sailing vessel-inspired house on Long Island Sound for $1.8 million, when the original asking price had been more than $3.5 million. Everyone else looking for property needed big houses with big rumpus rooms and big kitchens and big family rooms and huge bedrooms; he was used to a European approach to architecture, in which space is at a premium and good design is often synonymous with a space-saving aesthetic.

He bought the house, built in 1984, from a couple from Minneapolis who had hired mid-century architect Frank Lloyd Wright’s right-hand man John Howe (who worked with Wright for 36 years) to build a home for them. They were inspired by the arts-and-crafts style they’d discovered in their native Minnesota and wanted a home that was equal parts shoreline boat and inland hand-hewn. “When you’re in it, it feels like a sailing vessel quite a bit,” the homeowner explains, describing the narrow hallways, built-in seats and storage hidden behind and inside all of the couches. “It is so un-Manhattan, so un-nouveau riche. The master bedroom is little; everything is little.”

The current homeowner considers himself lucky in that he both didn’t mind the smaller scale of the house (it’s just 4,000 square feet split over two stories) and was able to find a thoroughly iconoclastic residence that he could spruce up with some of his own interventions (like a wall of windows by Tischler Und Sohn). The original owners had built a structure “very specific to their own liking, not thinking of resale,” something that makes “the quality of the house literally superb,” notes the homeowner. Specifically, he points to the soft limestone from Minnesota that clads the exterior and the teak wood that adds warmth—as well as another nautical punch—to the interior.

When he bought the Shippan Point house in 1997, the four-bedroom four-bathroom building was full of dated furnishings. “The rugs were dark, dark red. And the dining room table had these horrible Frank Lloyd Wright chairs that nobody can sit in for more than two minutes,” the homeowner says. So they brought in “the Italian stuff—light and summery oceanfront furniture.” A tile roof adds levity to the curving structure, while on the three-acre lot (the largest of a parcel originally belonging to the actress Marion Castle that was sequentially carved up over 100 years of inheritance taxes), “the largest circular driveway far and wide” connects the residence to the outside world.

And all points connect to water and the ocean. The radial lines of the house, the organizing principles that control the shape and sweep and turn of the hallways and bedrooms and exterior walls, originate from what the homeowner calls a “radius park” on the beach—a center from which, flying overhead, you’d be able to track all the angles on the property. The pool becomes part of this radius, shaped as it is like the bow of a ship, pointed out and toward Long Island Sound.

A version of this article appeared in the November 2012 issue of CTC&G (Connecticut Cottages & Gardens) with the headline: Vantage Point.