Inside a Southampton Barn Turned Home 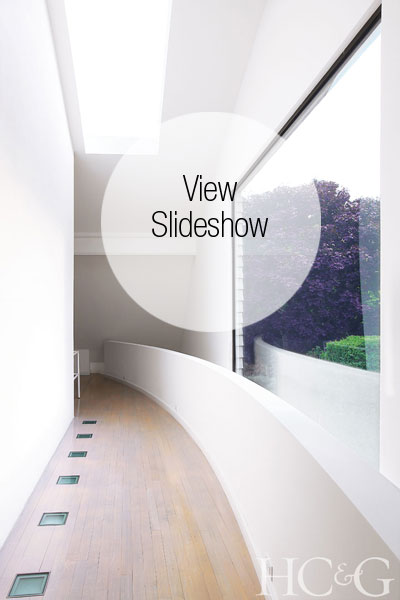 Phyllis and Eli Footer are avowed modernists, so a historic gambrel-roofed barn was not the likeliest choice for their East End home. But this is not just an ordinary barn. And the Footers are not just ordinary homeowners.

Southampton’s storied Hildreth family built the barn for their horses 135 years ago, and it had already been turned into 5,400 square feet of living space by the time the Footers first saw it, in the early 1990s. “I didn’t want to go inside,” Phyllis Footer recalls of the fateful day. The cedar shingles were mildewed, she says, and the postmodern embellishments of the 1984 conversion were not her cup of contemporary tea. The interior, however, won her over, particularly the light-drenched living area, with its soaring exposed-beam ceiling.

So the Footers, who at the time worked for Manhattan-based fashion footwear manufacturers Schwartz & Benjamin, bought the barn and moved in. Phyllis then spent a year looking for just the right interior designer before choosing Kyle Wells, whose work was primarily traditional in scope.

“She told me she didn’t hire me because of my portfolio,” says Wells, who had done a renovation proposal that appealed to his new client. Footer was playing her hunch that she and Wells would make a compatible creative team.

Their strategy was to respect the vernacular of the exterior and keep things modern indoors. Work proceeded slowly, in three major stages, over more than a dozen years. During the first phase, three guest rooms on the ground floor were reconfigured; the second phase called for gutting the rooms above them to create a baronial master suite. For the last phase, Hamptons-based architect Stephen Lesser joined the team to devise an addition for the west end of the house. The new façade not only removed such “improvements” as a circular glass hot-tub enclosure, but it provided a new and dramatic main entrance.

Wells filled the house’s interiors with classic mid-century furniture, adding contemporary Italian pieces and antiques, mostly from local sources. He stirred his own custom designs into the mix, too, like a 12-foot-long bronze dining table with a black granite top.

Not that the work is ever done, as there may yet be a phase four. Although the Footers have now retired and moved from Manhattan to Boca Raton, they still summer in the Hamptons, where Phyllis has a “someday maybe” plan to turn the gallery into a game zone (it already has a vintage Blatt pool table). And she has been wanting to remodel the kitchen since day one.

“We do a lot of cooking here,” says Footer, who likes to fill her home with family, including her grown sons and grandchildren. While “it’s a lot of house,” she says, it has its privacies. “Eli and I have our own sanctuary, and the hedges are high. We don’t know there’s another world out there.”

Wells, now a cherished family friend, also designed the Footers’ “even more modern” Florida residence. “I consider myself very lucky to have such a wonderful home in the Hamptons,” says Footer, “and I think we’ve made a modernist out of Kyle.”

A version of this article appeared in the June 2013 issue of HC&G (Hamptons Cottages & Gardens) with the headline: Barn Yesterday.