Inside a Southampton Guesthouse with a Western Twist 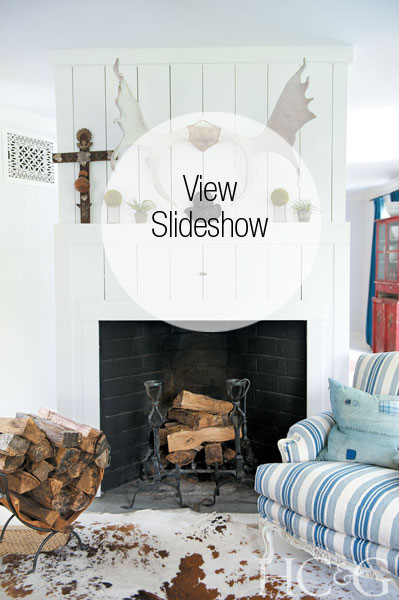 Former New York City Ballet dancer Rita Schrager’s personal style is sexy, chic, and effortless—so it comes as no surprise that the interior design of her home in Southampton reflects those very same qualities. Perched on rolling green hills, Schrager’s “Casa Cuba” comprises a stately main house where she and her daughters, Sophia and Ava, spend laid-back summers, as well as a gorgeous three-bedroom guesthouse and a smaller gatehouse, which Schrager refers to as “The African Room,” as it’s filled with pieces she brought home from a Kenyan safari. Designing just one house is a daunting task for most people, but for Schrager and her friend decorator Hernán Arriaga, tackling all three structures at once was just plain fun. HC&G got the back story on how the guesthouse came together in no time flat.

HC&G: How would you describe the design aesthetic for Casa Cuba’s guesthouse?
Hernán Arriaga: It’s sort of primitive American, inspired by the world of Ralph Lauren, with whitewashed floors, vintage photography, beautiful old flags, and antiques with a nautical or equestrian influence.
Rita Schrager: I always wanted a “Ralph Lauren” house, focusing on rustic furniture and great American design roots. But we needed to take into consideration that we’re both in the country and at the beach, so we created an interior mix that brought all those elements together.

Rita, how did you incorporate your Cuban heritage into the design of the guesthouse?
R.S.: I’m from a traditional Cuban family, and while I was growing up my home was filled with collections of religious icons, sculptures, and crosses, some of which I display in different nooks of the guesthouse. I also learned so much from my ex-husband’s [hotelier Ian Schrager] collaborations with creative legends like Julian Schnabel, Philippe Starck, and Andrée Putman.

Hernán, how does your Argentinean upbringing inspire your design?
H.A.: My design impulses come from the gaucho in me! I love organic materials and textures: cowhides, furs, leathers, driftwood, and branches, all elements typically found in great Argentinean interiors.

Rita is not only your favorite client, but also your best friend. How does your taste differ?
H.A.: I am a big admirer of Rita’s taste, and honestly, she is not even aware of her taste level—it just comes from her gut. She knows what she wants right away, and I help her decide where it will go! My knowledge is based more on experience, research, and learning about the history of pieces and styles.
R.S.: I met Hernán 12 years ago. I fell in love with his home in East Hampton at the time, as well as his gorgeous Fifth Avenue apartment in the city. I couldn’t wait to “play house” together on this design project.

Where did you acquire most of the pieces in the guesthouse?
R.S.: We hit auction houses, estate sales, and antiques stores from Quogue to Montauk. It was important to me to furnish the place as much as we could via local resources.
H.A.: I lived in the Hamptons for seven years and had a store in Amagansett at one point, so I know the best and sometimes even secret places for great furnishings on the East End.

What’s your favorite piece?
R.S.: A vintage red leather horse saddle I found at an East Hampton yard sale for $30. Another favorite is a gift from Hernán: four carved wooden saints that are more than 500 years old.

Do you entertain often in the guesthouse?
R.S.: Definitely. It breaks things up to have a second location on the property for hosting dinner parties. I like to have more intimate dinners on the porch of the guesthouse, and sometimes on snowy winter weekends, I move to the guesthouse for a “staycation,” making cozy fires each night.

Who have been your favorite houseguests?
R.S.: [laughing] Well, two of my favorites were Dulce and Lupita, two baby goats Hernán and I rescued from an animal shelter on Long Island. We originally set out to rescue a pot-bellied pig, but I fell in love with two baby goats instead! The whole drive home, we cried along with the goats, who were crying over being separated from their mom. My daughter Sophia got the names Dulce and Lupita from a telenovela!

A version of this article appeared in the August 1 2013 issue of HC&G (Hamptons Cottages & Gardens) with the headline: Mi Casa Es Su Casa.