Inside a Southampton Modern Makeover 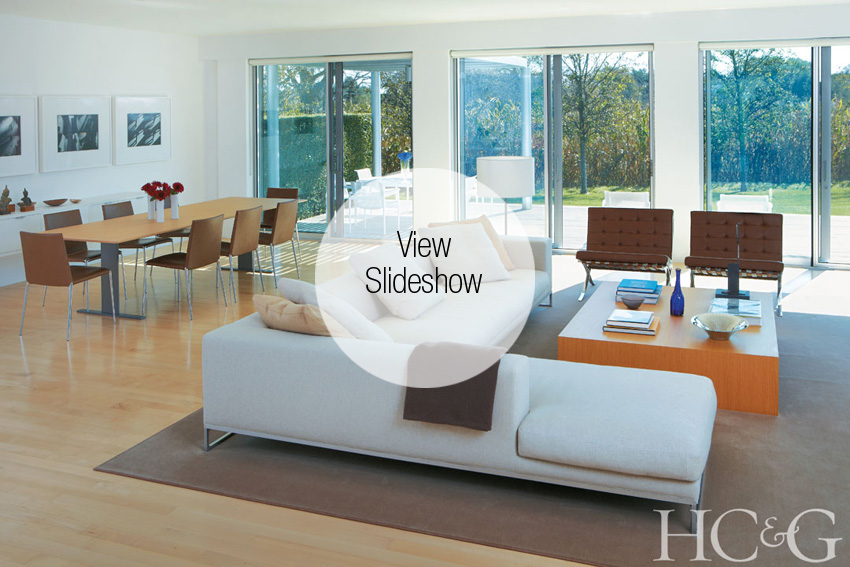 “It’s her house; she made it that way!”  Such is the sentiment of both architect Kirby Grimes and designer Carlos Otero when describing their collaboration on the Bridgehampton home of Louise Patterson. A Manhattan transplant originally from Atlanta, Patterson had always wanted a house near the sea; she had grown up surrounded by beautiful woods and was drawn to the lush vegetation of the Hamptons.

The nondescript 1980s spec house she bought fit her requirements of being near the ocean and adjacent to farmland. “I was attracted to where it was situated,” says Patterson, a commercial real estate broker. “I found the flat land bordering a working farm to be intriguing, and it was near the beach. What didn’t work was the house itself.” But she understood the value of the location and knew exactly what was needed to renovate.

“I wanted to simplify and open up the entire house, expand the living spaces, and get rid of moldings and baseboards—gut it and make it modern,” says Patterson, who also endeavored to blur the lines between inside and outside and make the landscape enhance the serene retreat she had envisioned. Next step: hiring an architect who would understand her directive. “I found Kirby Grimes through a friend, and once I saw his portfolio, I knew I wanted to work with him.”

Grimes, who had studied fine arts at William & Mary College and later received his architecture degree at North Carolina State University, moved to Bridgehampton in 1971, where he worked with a noted architect in town before going out on his own. His aesthetic of less is better than more fit perfectly with Patterson’s decree of modern and minimal. “I do not like to have a lot of things around me,” Patterson says. “I like clean, plain, simple. By nature, I don’t want clutter.”

The house, originally a humble 1,278 square feet, was  expanded by 672 square feet on the ground floor and 856 square feet on the second. “Louise wanted more space  throughout, a larger living room, a study, and a new entrance,” Grimes explains. “But the style needed to be updated, the pool renovated, and the landscaping and driveway improved in order to exemplify the clean lines of the modernized house.”

To enlarge the space as planned, Grimes added boxes to three sides of the original house, which included Patterson’s study, an expanded kitchen and living room, and a new front entrance. Outside, a deck was built with a dining pergola, and the pool was reinstalled (the foundation had collapsed). Finally, the landscaping got an overhaul. “When I bought the property, in the wintertime, I was assured wildflowers would grow, and come spring, there was nothing but weeds,” Patterson says with a laugh. “We went in and leveled the entire front and backyard.”

Grimes also streamlined the exterior trim and stripped all the interior trim. “I like to see through a house,” he says. “It makes it more inviting, and gives it a sense of serenity.” The kitchen was already open to the living area, but the ceiling was lowered to make the space more intimate. Patterson’s focus throughout the process always centered on the outdoors. “I wanted to feel like I was outside even when I was  inside,” she says. “I had the idea of putting a window seat in the kitchen,  which frames the apple tree. Kirby and I worked together on every detail, even down to the gravel outside. Believe me, I was in the railroad yards looking for gravel all over Long Island—I have been places!”

The team even found the wood for the flooring long before they locked in the final design. “Everything was a collaboration,” Patterson says, down to the mandate to keep the living room television hidden at all times. Grimes’s solution was to bring his talent as a fine artist into play by painting a canvas that seamlessly slides over the TV when it’s not in use.

As an architect working mostly on interiors, designer Carlos Otero was responsible for integrating the furnishings and art. “I always make sure the architecture and interiors become one,” he says. “The most important aspect here was to not have clutter and to be very modern. Louise is a true minimalist and likes things orderly. She isn’t afraid of plain white walls, and she really appreciates  proportion, simple lines, and well-constructed materials. She  understands that beauty is a function, too.”

A version of this article appeared in the June 2012 issue of HC&G (Hamptons Cottages & Gardens) with the headline: Modern Makeover.

The futuristic, spaceship-like villa nestled in the hills above the Las Flores Canyon watches over all of Malibu.