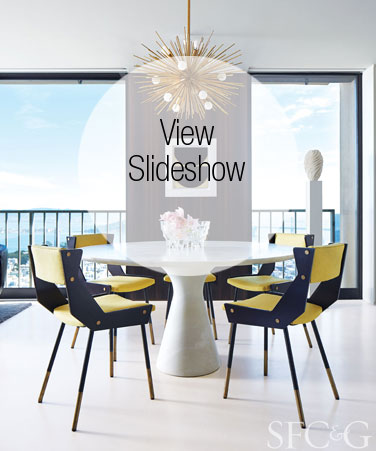 If Don Draper were to move to San Francisco, he would feel right at home in this urbane pied-à-terre at the top of Russian Hill. “It’s super-sophisticated; it’s a 2015 update of midcentury style,” says its designer, David Oldroyd of San Francisco–based ODADA (Orlando Diaz-Azcuy Design Associates). With its city views, dark flame eucalyptus walls and custom furnishings, the space invites extensive lounging sessions over a martini or two.

It was an ideal project for the debonair Oldroyd, whose firm has created sleek, curated spaces in the city’s most glamorous high-rises. The 1,250-square-foot condominium is in the Summit, the 1965 Eichler tower known for floor-to-ceiling glass walls and spectacular views of the city and Bay. Oldroyd had a particularly intimate connection with the building, since he’d recently given its lobby a complete makeover—with floating walls of silver travertine and paneling of dark vertical-grain walnut—so he was primed to channel a heightened version of midcentury chic for his clients.

Oldroyd lined the walls with handsome flame eucalyptus, referencing the vertical (rather than horizontal) paneling of the era. As a “palate cleanser” to the dark wood, he created a custom, all-white kitchen. “I’ve always wanted to do an all-white kitchen that sublimates into an art space,” says Oldroyd. “This is the most extreme kitchen that we’ve ever done.” The “non-kitchen” has all the appliances and appurtenances (save a range hood), but all are hidden from sight. “Everyone looks good standing in front of it,” he adds.

He also gave the entire home a floor of white composite concrete, poured as a continuous plane with no expansion joints, to achieve a seamless effect. “It’s part of the reason why the space feels so quiet and minimal, although it’s something you may only pick up on subconsciously,” he says.

With this framework in place, Oldroyd set about designing bespoke furnishings and selecting key vintage elements. “We took this glorious, pristine backdrop of a box and filled it with beautiful things,” says Oldroyd. “The clients weren’t shy about spending money on the right pieces.” The contemporary artwork is top shelf: Visitors are greeted by a dynamic, large-scale Judith Foosaner work at the entry; there are also works by Emil Lukas, Arik Levy, Idris Khan and Adam Fuss.

Anchoring the living space is a spectacular two-sided sofa. The large custom piece, designed by Oldroyd, had to be built in four separate sections to fit into the elevator and was then assembled on site. The ovoid coffee table was similarly designed with entertaining in mind; it was carved out of a matte-white resin instead of stone, so it is impervious to wine-glass marks and accidental scuffs. Bringing vintage personality to the mix are a pair of Milo Baughman lounge chairs with original black vinyl upholstery and 1970s Italian dining chairs, reupholstered in Loro Piana linen.

The sleeping area doubles as an additional hangout, thanks to a custom platform bed with a fitted slipcover of quilted suede that easily transforms into upholstered seating for gatherings. “As austere as the architecture is, the furniture is exactly the opposite—everything is playful and inviting,” says Oldroyd. “It’s a very comfortable place to be.”

A version of this article appeared in the November/December 2015 issue of San Francisco Cottages & Gardens with the headline: Cocktails at 6.