Inside a Traditional Home with a Creil Pottery Collection 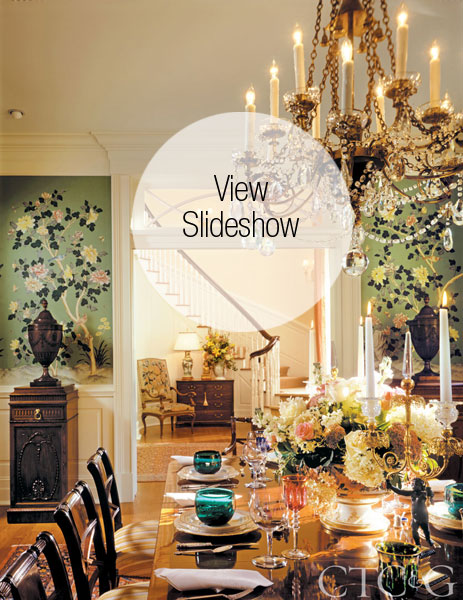 The painted scenes on the plates and tureens, platters and sugar basins, soup bowls and teapots that fill shelves of this Coastal Connecticut house are not unlike the views seen through its windows. Just as the collection of antique French Creil works depict vast country estates with formal gardens, promenading couples, and the flora and fauna of idealized bucolic settings, so too are the vistas just beyond.

"When the couple first approached me to design every room in their new home,” says interior designer Christopher Boshears, “they explained that one of the focuses for the new residence—indeed, one of the reasons for their house—was to highlight their collection of antique French pottery in a way that they hadn’t been able to before. They were determined to live with it every day for the first time.”

The now-retired couple had been living in a modest 1960s ranch in Stamford. “Everything was exactly as it had been placed in 1963 by a Bloomingdale’s interior decorator,” says Boshears. But interspersed among the sculpted carpets and low-slung contemporary furnishings were gleaming English Regency and George III pieces. “Cupboard after cupboard was filled with these beautiful objects, mostly Creil pottery, that had never seen the light of day.”

Together with architect Laura Kaehler, who had designed the 6,000-square-foot French Normandy–style house, Boshears’s role was to find a way to show off the period works. The collection of Creil pottery is so extensive—rivaling the combined collections held by the Victoria & Albert, Art Institute of Chicago and Metropolitan Museum of Art—that Boshears needed to be careful not to make the house feel like a museum. “Fortunately, the clients went to enormous lengths to pick out every wall color and make of brick and texture of grout,” says Boshears. “They wanted to build a house and create interiors in which they would live for the rest of their lives. So they took their time, two years, in fact. I love having clients who collaborate closely with the interior designer and architect. Then they truly get everything that they could possibly dream of.”

Upon first showing Boshears their collection, the couple emphasized that their love of Creil (named for the town, north of Paris, in which it was made between 1795 and 1894) derived from the fact that it was manufactured as everyday china for the middle class. “They like the fact that Creil was used all the time and often disposed of,” says Boshears. “It was china that got broken, but was easily replaced.”

Although the pottery remains conspicuous in virtually every room, other decorative features in the home emerge, too. Boshears considers the formal dining room as “one of my most successful rooms I have ever done in any of my interiors,” he says, citing a series of hand-painted custom wallpapers from Gracie, based on 18th-century scenes, as the defining details. “The greatest moment for any interior designer comes at the point in a job when the trust between client and designer is truly established. In this project, that came with these scenes. The clients are not wild about birds, but I felt that the room needed to have this motif. They recognized the scenes and the colors and the scale of them as right for the space. They trusted me to do the right thing—and now they’re happy to live with these birds.”

In creating interiors that harken more to a classic English country house than to one in northern France, Boshears used his trademark ability to mix and layer periods and to saturate rooms with color. “For me, any room, number one, has to be about comfort. And saturated color brings life into a space, and makes a person want to linger.”

As for the life the couple now leads in their new home, they often characterize it as “floating,” according to Boshears. “They simply float in the rooms,” he says. “They love experiencing their home every day. And if you spend time with them, you’ll likely not be eating off Creil pottery, but you’ll certainly learn all about it—and probably come to love it, as I have.”

A version of this article appeared in the September 2012 issue of CTC&G (Connecticut Cottages & Gardens) with the headline: The French Connection.