Inside a Traditional Litchfield Home 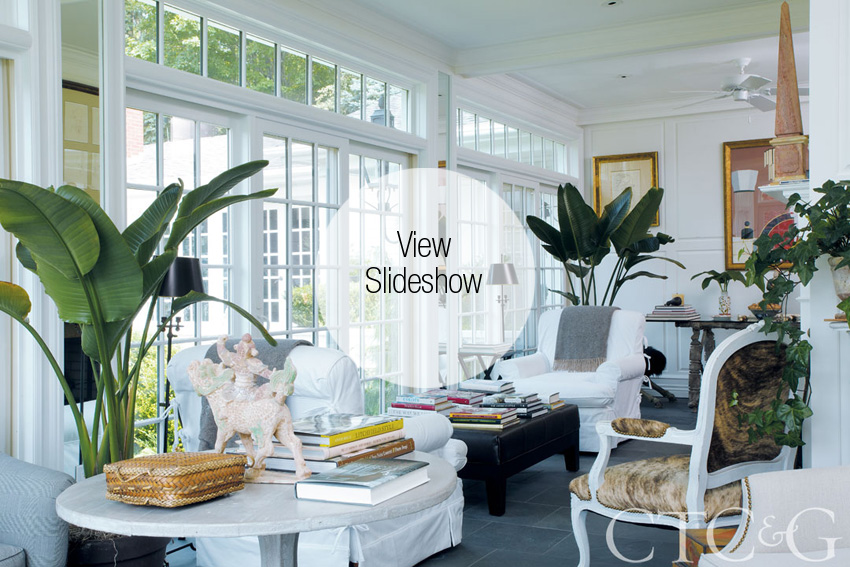 Joseph Cicio, master retailer, merchandiser, and consultant, is a true gentleman who possesses many enviable traits. Aside from great creativity, an unerring eye and terrific taste, he is a person of high energy. So, three years ago, when he decided to add 3,000 feet to his 1960s ranch-style home in Warren (serving as general contractor, architect, interior and landscape designer himself), he embraced the project as just another enjoyable exercise in personal expression.

Cicio’s objective in this home was to have everything that the existing house lacked. Not only has he added a second story, several bathrooms and fireplaces, an office, dressing room, master suite, butler’s pantry off the new living room, and a day room, but also a complete lower level equipped with large storage/work areas and a state-of-the-art home gym. Additionally, many of the rooms in the original home have taken on new functions. For example, the former living room was turned into a large dining hall and a music room became the entrance hall.

In just 14 months, Cicio transformed the house and the grounds into a truly beautiful Litchfield County estate (with a touch of England). Best of all, it looks as though it has always been exactly this way. “When I bought this property, not one of these trees or plantings was here,” Cicio points out. Today, the grounds boast magnificent greens of all species, terraced levels with stone stairways, and an abundance of flowers.

Cicio designed a new main entrance that is reached via a fieldstone path and steps, and a large bluestone landing that runs nearly the length of the house. The front door opens into a formal reception room that features a round Biedermeier table stacked with five piles of antique books, each topped with one large brass letter spelling out CICIO. Generous coat closets were built to accommodate the needs of a man who likes to entertain often.

Taking advantage of the view of Warren’s steepled white church, he centered the living room’s bay window and the master bedroom window (located directly above the living room), creating a perfect New England vision in both spaces. The hidden master suite is reached by ascending a new stairway, then pushing a secret latch on a wall of bookcases, allowing one whole bookcase to swing open.

The living room houses three separate, intimate seating areas and a Steinway grand piano belonging to his son. On the opposite side of the double fireplace is the day room, where two walls are lined with floor-to-ceiling French doors, taking advantage of great light and magnificent views. Every inch of every room is a perfectly composed vignette (Cicio began his career as a display artist). Cicio is happiest when he’s moving things around, re-covering furniture, rehanging paintings, and styling his home.

Several of the home’s details were intended to reinforce the perception that they had always been there: The floors are antique walnut planking; leaded glass doors were designed to recall a period long past. Room colors were chosen to complement the collections intended for each space. To select color, Cicio brought home hundreds of paint chips, spread them out on his kitchen table, and, over weeks at a time, removed chips when passing through, thus narrowing the selection.

Another of Cicio’s objectives was to use furnishings and objects collected over a lifetime, many of which had been stored in a barn on the property exactly for this purpose. Sofas, chairs, artworks, crystal, carpets and more saw the light of day for the first time in years. “It was like Christmas, discovering things I had forgotten,” he says.

His inspiration to collect can be traced to his early years working at Lord & Taylor, where he was befriended by CeCe Kempner, one of the buyers. She advised him to purchase at least one beautiful thing on each business trip. Then, in coming years, his home would be filled not only with wonderful things, but also wonderful memories. As a vice president at Macy’s, CEO of I. Magnin, president of Donna Karan’s retail division, and, most recently, consultant to His Royal Highness, the Prince of Wales, Cicio has certainly traveled the world.

Now, his collections and furnishings fill the home. “If I love something enough to purchase it, immediately I have a relationship with that object,” Cicio notes. “I often wish these things could talk and tell me where they had lived before. Funny to think I will not be here one day,  but they shall.”

Despite his desire to furnish his home to perfection, Cicio confesses, “When a project is finished, I get bored. I almost think I could sell this home totally furnished and start anew.”

A version of this article appeared in the October 2011 issue of CTC&G (Connecticut Cottages & Gardens) with the headline: Well Manored.

This article appears in the October 2011 issue of CTC&G (Connecticut Cottages & Gardens).