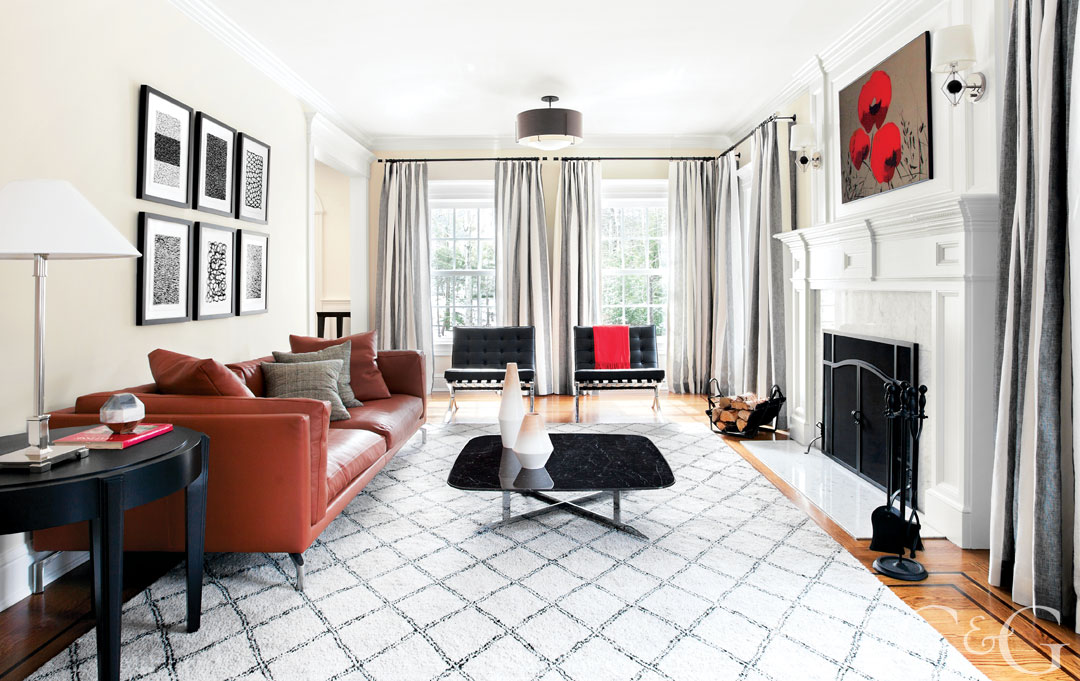 When a young couple from Manhattan decided to trade their Upper East Side apartment for a house in the suburbs, they knew they wanted a spacious home that would accommodate their growing family. They bought a five-bedroom Colonial on an acre of land in New Canaan and set about marrying their urban aesthetic with the home’s more traditional lines. The wife has a keen interest in design and was determined to do the interiors on her own. After a few false starts, she turned to the team at Décor Aid for help. “I bought a bunch of big-ticket contemporary items,” she explains. “But when they were all in place, the house looked very cold. I like modern and I wanted nice things, but my priority was making the space family friendly and livable.”

Enter lead designer Alex Caratachea, who quickly sussed out the situation and came up with a game plan. “They love the modern aesthetic,” says Caratachea. “But everything needed to be more in keeping with the architecture. We achieved that by adding softer accents and textures—a mix of traditional, transitional and contemporary.” 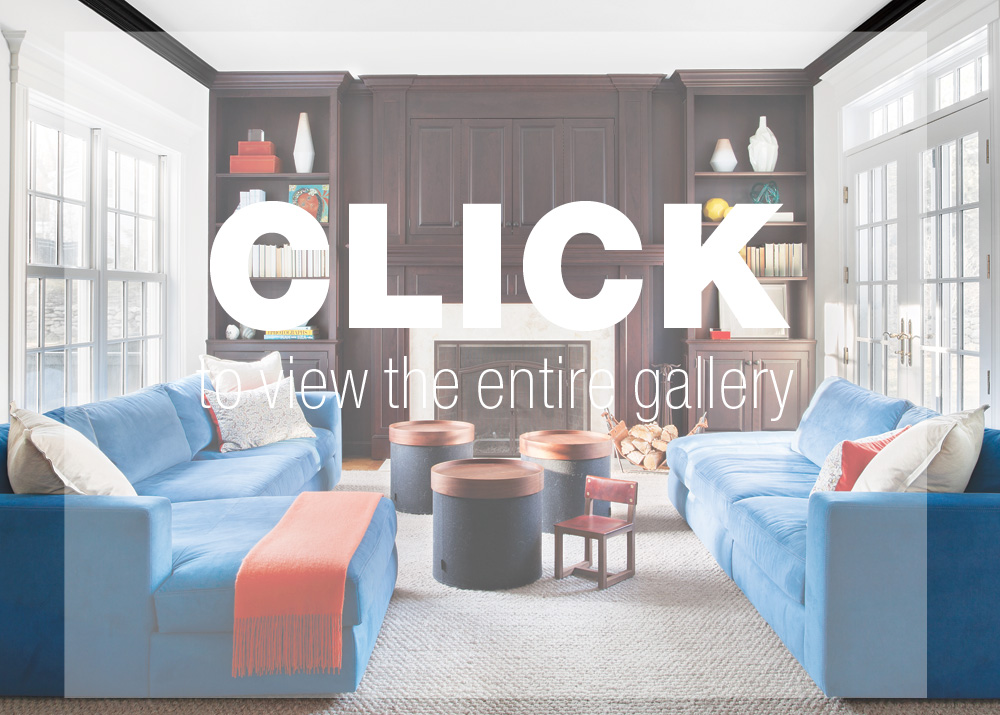 The center-hall Colonial was built in 2005, and the homeowners kept the original millwork and decorative moldings, gave each room a fresh coat of paint, and refinished the wood floors. However, the “typical suburban tract lighting” had to go, Caratachea says. He updated and replaced close to 30 fixtures—adding sleek, contemporary sconces, pendants, table and floor lamps—and the effect was immediate. “It gave a whole new picture to the house,” the wife says. “It made the modern pieces blend together with everything else.”

With the lighting under control, the designer turned his attention to warming up individual rooms. First up: the living room, where the homeowners had bought a sumptuous camel leather sofa, a pair of tufted black leather Barcelona chairs and a black marble coffee table. “It was shaping up to have a midcentury modern aesthetic,” Caratachea says, “but it was very cold.” He softened the hard edges by adding French pleated linen drapes and a hand-knotted wool rug. A red cashmere throw refers back to the red poppy in the painting above the fireplace; a grouping of black and white prints graces the wall above the couch. “The whole effect is graphic and bold,” says the designer. “Your eye is drawn naturally from one area to the next.”

Similarly, the dining room with its streamlined table and chairs from Ligne Roset “needed some warming up,” Caratachea recalls. That changed when he incorporated silk taffeta drapes, a wavy milk glass pendant, and a rare Oriental rug in dreamy shades of blue and cream.

One of the biggest challenges was the family room, with its dark cherry paneling and built-ins. “We wanted to make it feel lighter,” Caratachea says. The homeowners also wanted ample seating for their extended family, but they had bought just one sofa, a pair of leather chairs, and a rug that covered only half the space. The designer reconfigured the layout by creating two distinct seating areas. In one, he added a second sofa—upholstered in kid-friendly ultrasuede—and trio of gray wool-felted ottomans with removable walnut tops. In the other, leather chairs cozy up to the TV. The too-small area rug was layered atop a larger sisal rug to tie the space together. Orange and yellow accents add pops of color, and give the room “joyful feel,” he says.

Upstairs, in the master bedroom suite, the mood changes completely. Other than the large walnut bed that the wife had purchased from BDDW, this was the one room in the house the designer created from scratch. The restful palette comprises shades of ivory and white, and the antique rug is flecked with subtle hints of blue. “The bedroom is a true sanctuary,” says Caratachea. “You walk in, and it’s like stepping into a cloud.”

A version of this article appeared in the January 2017 issue of CTC&G (Connecticut Cottages & Gardens) with the headline: On Cloud Nine.