Inside an Abstract Artist’s Bridgehampton Farmhouse 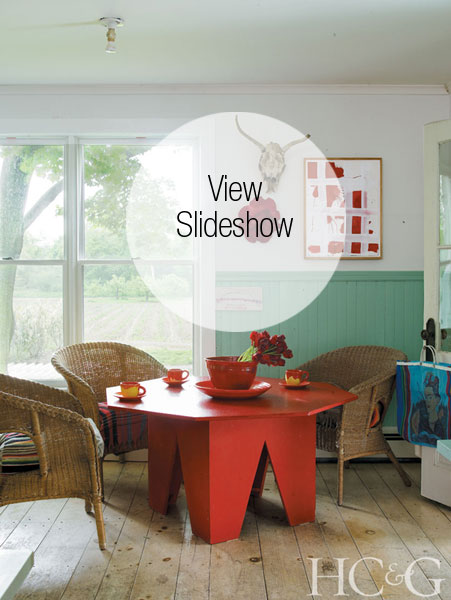 Upon entering Mary Heilmann’s Bridgehampton home, it’s only natural to imagine the owner as a precocious undergraduate who’s “majoring” in Art. Do-it-yourself style abounds in all the rooms: furniture hand-crafted from plywood, maps thumbtacked to walls, upholstery improvised from Indian block prints and Mexican serapes. It’s the kind of look that some people attempt during their twenties, only to abandon it just as soon as they can afford to indulge in so-called good taste.

How inspiring, then, to discover that this witty and winning decor is actually the ongoing, ever-changing creation of artist Mary Heilmann, whose paintings and ceramic sculptures are prized by museums and collectors around the world. With such cheeky titles as Save the Last Dance for Me and Surfing on Acid, Heilmann’s explosively vital canvases often have irregular shapes and feature bold juxtapositions of neon yellow, hot pink and chartreuse.

“Her work has a beautiful directness,” says her friend and fellow artist Billy Sullivan. “Mary has the secure movements of a Zen master. It is very immediate, the way she puts paint down. She lets it rip!

Recently retired from a teaching job she held for many years at the School of Visual Arts in New York, at 71 Heilmann still maintains a youthful enthusiasm for films, television and music and converses with equal vigor about everyone from Donald Judd and Bruce Naumann to Moby and the Simpsons. “My work comes from a place that is inspired by popular culture,” Heilmann says. “It is diaristic and biographical. I like to do things that look like they were easy to make.”

Heilmann could just as easily be describing the exuberantly off-kilter way she has decorated her Bridgehampton property, which she bought in 1995. Originally built in the 1920s from a kit sold in the Sears & Roebuck catalog, the humble house immediately appealed to her, as did a ramshackle barn that she intended to turn into a studio. Eventually, Heilmann razed the barn and built a new structure almost exactly the same shape and size, with tall windows facing onto a field she bought next door. She turned this land into an organic farm, which she tends in collaboration with her next-door neighbors. “I like to surround myself with tons of things to look at,” she says. “Books, posters, pictures of friends—and now, beet plants and pear trees. I am a collector of things.”

She is also a skilled curator, blessed with a keen eye for arranging unlikely items in just the right way. In another setting, the red plastic Buddha lamp, or the enormous beach ball with a globe motif, or the shopping bag with an image of a scowling Frida Kahlo might seem like mere kitsch—not to mention the children’s alphabet set made of garishly colored sponges. In Heilmann’s hands, though, each object becomes an objet. Even her most idiosyncratic selections take on new resonance alongside her considerable collection of art by colleagues such as Donald Baechler, Marilyn Minter, Jack Pierson and John Waters.

But fussy distinctions between what’s “high” or “low” in art and culture seem not to concern Heilmann in the least. Case in point: In her barn/ studio, Heilmann prefers to prop her in-progress paintings on little children’s chairs and tables that she buys at the Variety Store 5 & 10 on Sag Harbor’s Main Street. “Mary’s taste is definitely free-spirited, but more important, it’s free of convention,” says her friend artist Dianne Blell. “It is extremely tough to stay true to yourself, and no one I know does it better. Mary, and the way she lives, is altogether unique. She is just very Mary.”

A version of this article appeared in the July 1 2011 issue of HC&G (Hamptons Cottages & Gardens) with the headline: There’s Something About Mary.

This article appears in the July-1 2011 issue of HC&G (Hamptons Cottages & Gardens).