Inside an Airy Central Park West Duplex Where Artwork Shines 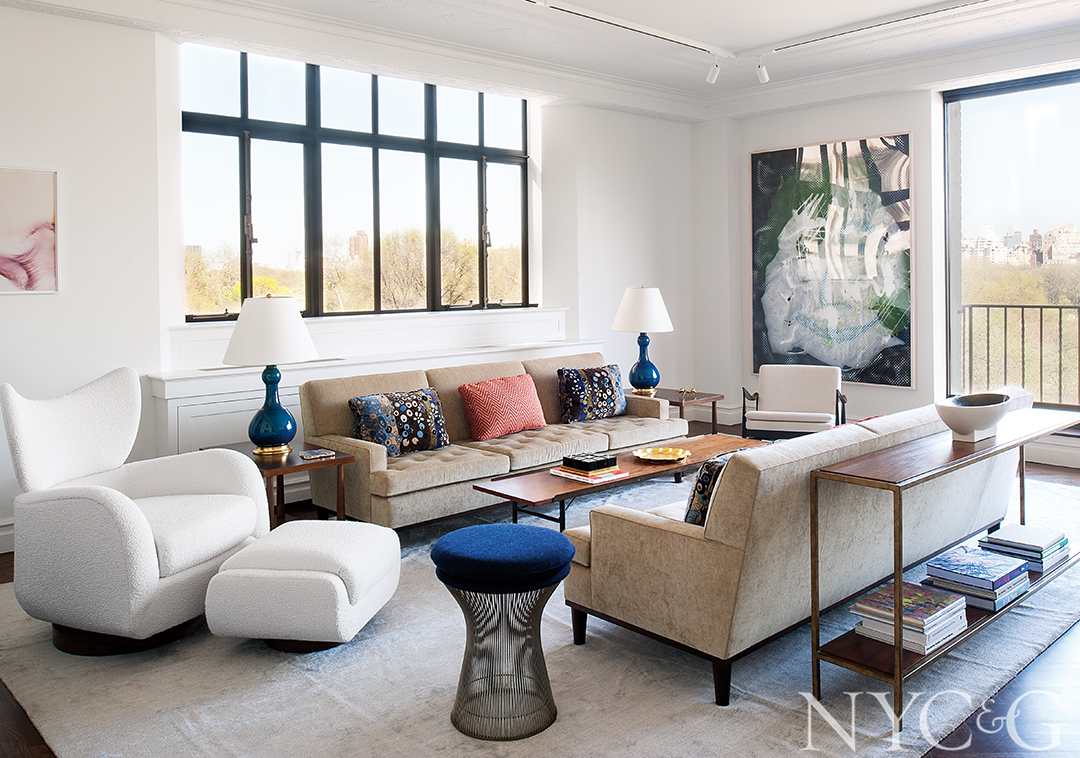 When Helen Lee moved into her duplex on Central Park West, she “thought it was going to be a five-year apartment.” Indeed, she and her husband looked around in the years that followed, seeking a place they might like better. “But we never found anything with more character, 20-foot ceilings, or such amazing views,” she says. “And the light!”

The light, after all, was always the point. The building, completed in 1919, was designed by artists for artists, so the residences’ living rooms (formerly art studios) have soaring windows, many of which face the park. The structure held particular appeal for Lee, who has worked as an art adviser and at Christie’s and is currently chairman of the American Foundation for the Courtauld Institute of Art in London.

In the end, Lee and her husband decided to stay, settling for a gut renovation instead. After a year and a half of planning, they decamped for 10 months while the kitchen and bathrooms were entirely remade and all the windows replaced in a style consistent with the building’s landmark status. And then their next-door neighbor asked if they were interested in buying her apartment. The timing was not propitious.

“We had just moved back in,” remembers Lee, “and I thought, Are you kidding me? No way! We had poured our heart and soul into making the old apartment exactly what we wanted.” But the notion of more space became impossible to resist, and back came Lee’s architect, Daniel Frisch, to make new plans. “And then all the new walls, all the new bookcases, the special niche I had installed for my Hiroshi Sugimoto photograph, and all the special lighting came down.” This time around, the couple stayed put during the renovation. When it was done, the much larger apartment boasted a brand-new office, a guest suite, and a spacious gym with panoramic views across Central Park.

For the interiors, Lee hired British-born decorator Katie Lydon. “It was a clean white space, which is what Helen wanted so that she could curate the decor along with her art collection,” says Lydon, who was challenged with accommodating pieces by art-world heavyweights such as Donald Judd, Willem de Kooning, Wolfgang Tillmans, and Sigmar Polke, as well as emerging and unknown artists. “The project really was a collaboration in the best sense, because we talked about every detail and how everything would work together. The look of the apartment might seem a bit stark on first sight, but it’s all about balance. We wanted to let the artwork breathe and leave space for new pieces, and accent the spare interiors with the vibrancy of the views. The picture windows are like massive expanses of wallpaper.”

The furnishings are just as deeply considered, providing a carefully weighted mix of functionality, comfort, and sculptural lines. In the living room, for example, two crisply tailored sofas contrast with a sensuous Vladimir Kagan swivel chair and ottoman, a mid-20th-century armchair by Brazilian architect and designer Jorge Zalszupin, and tables by T. H. Robsjohn-Gibbings and Finn Juhl. In the master bedroom, matching mohair-upholstered Marco Zanuso armchairs from the 1950s play against a Louis XVI–style fauteuil and a modern black desk with a hint of history in its legs. And in the breakfast nook, an Art Deco ceiling fixture from the short-lived S.S. Normandie hangs above a Saarinen table from Knoll.

The artful lair is a far cry from its previous incarnation, which was heavy on 19th-century furniture and taffeta-upholstered walls. “It was gorgeous,” Lee says, “but we never used it.” Fortunately, the formidable team of Frisch and Lydon k.o.’d their client’s fear of renovator’s remorse. “Everyone was wonderful,” Lee recounts. “Katie is a friend now, and I socialize with my architect and still love my contractor. It was crazy, but I’m really glad we did it.”

A version of this article appeared in the April 2018 issue of NYC&G (New York Cottages & Gardens) with the headline: Fresh Canvas.