Inside an Art Filled Southampton Home 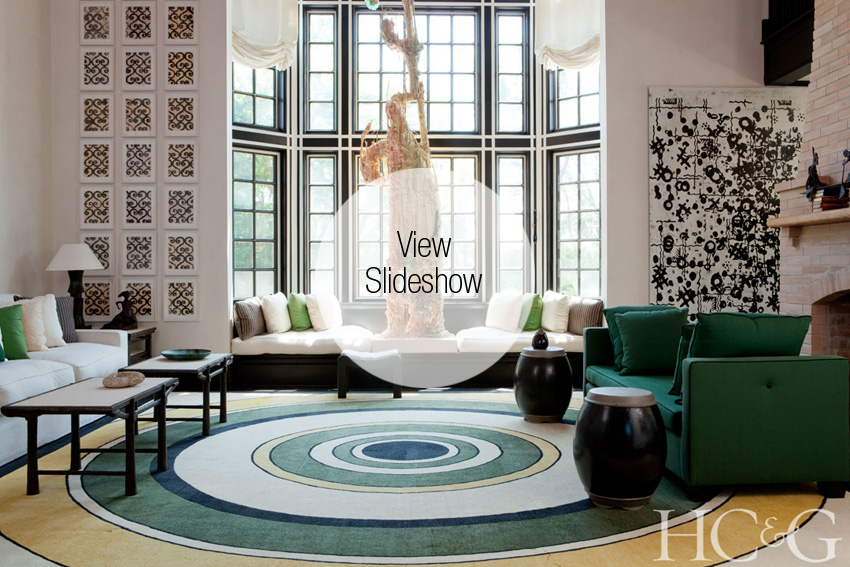 Interior design is a way of “creating comfort with the space that you have been given,” says Tino Zervudachi, the Paris-based decorator whose project for an art-collector client in Southampton is featured on these pages. “A room should feel effortless, and the proportions should work seamlessly together.”

Although gregarious by nature, the neat-featured and well-dressed Zervudachi is discretion personified. Extremely secretive about his clients, he also rarely talks about his family, whose wildly romantic history evokes the heady days of pre-Nasser Egypt. His forebears led a charmed, cosmopolitan existence and spent their winters in Alexandria, splitting the week between their penthouse apartment overlooking the Guenana el Shalalat, or Garden of Waterfalls (it was decorated by Maison Jansen, the legendary French design firm), and a beach house on the Mediterranean next to King Farouk’s Montazah Palace. Summers were spent at Villa Draneht Pasha, the family’s sumptuous mansion on Italy’s Lake Maggiore, which had 20 bedroom suites, salons filled with valuable French furniture, and a fleet of liveried footmen. Zervudachi’s great uncle, Peter Zervudachi, ran the Galerie du Lac in Vevey, Switzerland, an address that became fabled for its objets d’art and exceptional clients like Heini Thyssen, Gianni Agnelli, and Empress Farah Diba.

Zervudachi and his three siblings were brought up in a sprawling house in leafy Holland Park, in London. One day, while visiting his father’s cousin in Greece, Zervudachi discovered the world of interiors magazines. “His American wife had them all,” he recalls, “and I sat for hours going through the piles.” But his passion for interior design had actually begun when he was four years old. “I was very interested by the opening and closing of drawers, for example, and how furniture was made generally, and I remember being very attuned to the sensation of a cold stone floor versus a carpeted one.” Inside his bedside cupboard, he even organized a house for his teddy bear. “I used stamps as pictures on the wall and created a miniature world.”

Despite his gift for interior decoration, Zervudachi doubted it was a career for him until he met David Mlinaric, the esteemed London-based interior designer. The then-19-year-old Zervudachi was assisting Derry Moore, the interiors photographer, at the time. “At a photo shoot in Eaton Square, without being told, Tino knew to turn the chair to be three-quarters, rather than the side view,” says Mlinaric. “He just had that instinct.” The next day, Mlinaric asked Moore’s permission to hire Zervudachi as his assistant. “I thought I would work for him for a year,” recalls Zervudachi. The association lasted 25 years. Zervudachi became a partner in 1987 and ultimately bought the company when Mlinaric retired in 2005.

Zervudachi was immediately thrown into Mlinaric’s elegant orbit, whose clients included Mick Jagger, Jacob Rothschild, and the National Trust. “David was my mentor and helped me to analyze space and to strip the information down,” Zervudachi says. “He also taught me to seek a logical conclusion. Sometimes you need to do something wrong because it works that way. That is what makes life easy—knowing what the solutions are.”

Thanks to Zervudachi’s efforts, the firm eventually established new offices in a former china shop in the historic Palais Royal in Paris, where the novelist Colette and the artist Jean Cocteau once resided. By the early 1990s he had assembled a formidable team of artists and craftspeople whom he continues to work with today. When it comes to designing a space, Zervudachi says, he is reminded of wild animals: “What’s comfortable to a lion isn’t comfortable to a polar bear.” To his mind, “comfort” is not just about soft cushions and warm rooms, but also about “more or less furniture, bigger or smaller rooms, and clutter or less clutter. It’s all about the cloth you have been given to cut.” It’s not at all surprising, then, that he describes himself as having “100 rooms in my head at the same time. They are all there, with every detail—the door handle, the cornices, the cushions—and I am always thinking about how to improve things.”

A version of this article appeared in the June 2012 issue of HC&G (Hamptons Cottages & Gardens) with the headline: Tino's Triumph.