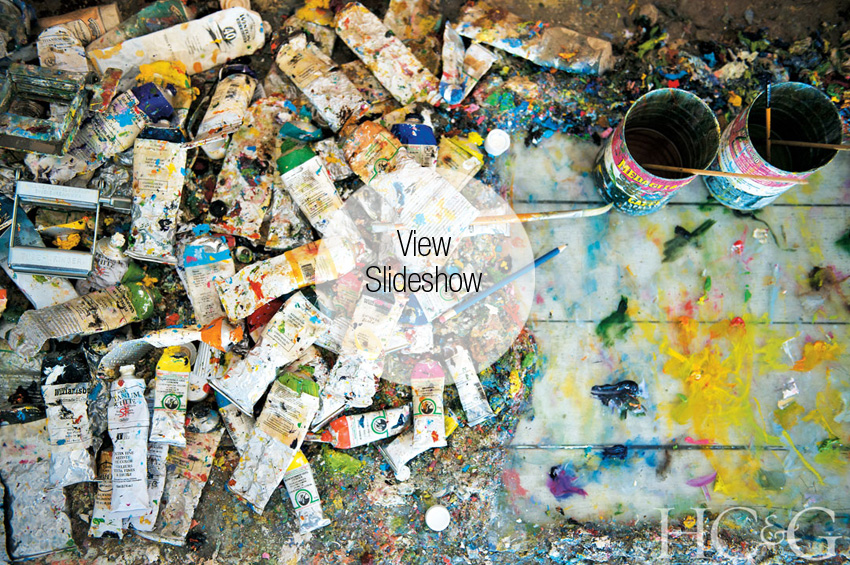 In his cottage/studio overlooking Little Fresh Pond, a freshwater gem in Southampton, artist Robert Harms paints away in idyllic seclusion. He practically floats there, as the pond ripples along the shore only steps from his first-floor bedroom and office, and just below the deck off his painting space and living room above. Even from his lofty perch over the water, neighbors are barely visible. “It’s like I’m living on a boat!” Harms says. In fact, everything about the cottage is similar to life on a sailing vessel: The spaces are small, the details minimal, and everywhere one looks there’s water.

The furnishings are almost incidental, but nevertheless selected with an artist’s eye. From the faded Louis-whatever chair to the 1,000-pound vintage metal office desk, everything has a specific aesthetic quality to it. Harms has recently been at work on larger canvases, so tables and chairs have been pushed aside to allow for more room and for more light to infuse the studio. His furniture layout is transitional, and like Harms, it goes with the flow.

As with most artists, it’s all about the light. “At the end of the day, the entire room glows with the colors of the setting sun—the light just bounces off the pond and into this space,” says Harms, a Long Island native who frequently exhibits at the Drawing Room in East Hampton and whose works are included in the collections of the Metropolitan Museum of Art, Guild Hall, and the Parrish Art Museum. “As I paint, I actually have to adjust for changes in the light, but I’m used to that.”

It’s difficult to imagine a more perfect setting for a landscape painter, if one can even describe Harms as such. “Mark making” is the term that most critics use when referring to Harms’s work, which has really become a visual diary of his life, not just the pond that he sees outside his windows. For example, a friend’s garden in Hampton Bays, packed with tulips, lilacs, lilies, and peonies, shows up here and there in his oil paintings or in a small watercolor of a vase of flowers. And Nevis, where Harms travels for winter getaways, affects his work drastically: Canvases he paints there are always saturated with brighter, denser color. Still, a flash of fuchsia bougainvillea might find its way into one of his Southampton canvases as a sort of Caribbean keepsake. “The paintings start to inform one another now,” Harms says. “It’s no longer about a specific landscape, as in my earlier work.”

As an artist Harms is acutely aware of what he is doing. “You might think I would get bored of this view of the pond,” he says. “But it’s constantly changing. I look at someone like Cézanne and his apples, and how he would constantly find a different way of painting them—it’s very inspiring.” As for the white borders that have appeared on his canvases in the last few years, they are intentionally employed to remind observers that they’re looking at a painting, rather than a precise representation.

Living on the pond for the past decade has impacted Harms’s work tremendously. Even the canvases he paints on are sized in proportion to the windows that look out on the water. Previously he painted in a cavernous space in Amagansett with broad vistas of Gardiners Bay. “There, my view was much flatter, a series of almost Rothko-like horizontals,” recalls Harms. “Here, my work has gone from landscapes to something more about lines to the work I am currently doing, with washes of color influenced by my daily life. So who knows what’s next?”

A version of this article appeared in the July 1 2013 issue of HC&G (Hamptons Cottages & Gardens) with the headline: Harm's Way.