Inside an Eclectic Rock & Roll-Inspired Apartment 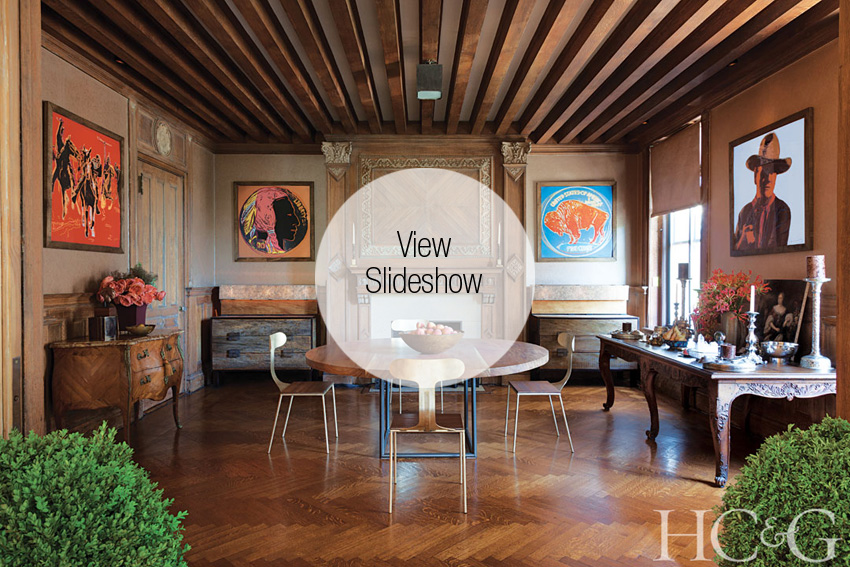 To paraphrase Voltaire, Marsia Holzer would have to be invented if she didn’t already exist—although it would take an individual with a stunning imagination. Characters like Holzer, who spent 20 years creating costumes for rock legends from Elvis and the Rolling Stones to Bruce Springsteen and Pink Floyd before becoming a sculptor and furniture designer, don’t come along every day. The British-born spitfire is also a noted equestrienne who grew up on a farm in Hertfordshire and started riding at the age of four. Oh, and her father was Lord Mayor of London.

Inspired by the Rolling Stones’ “Route 66,” Holzer moved to New York in 1965 with barely a penny or a pound in her purse. She met celebrity photographer Bert Stern at a gallery opening and convinced him to hire her; he suggested she become a stylist when she kept producing choice pieces of vintage clothing for his shoots. In 1968 she moved to Los Angeles, where she managed to hook up with the Rolling Stones through a friend, establishing herself as the rock world’s costume designer du jour. A chance encounter on an airplane led to her designing the clothing for Hair on Broadway. “Not everything,” she’s quick to point out, “but some of the beadwork and fringed stuff, tie-dyed pants à la the Kings Road shops.”

For nearly 40 years Holzer has lived with her husband, real estate entrepreneur Leonard Holzer, in a stately Central Park West apartment, where they raised three children. (Lenny also has a son from his first marriage, to Andy Warhol party pal Baby Jane.) The four-bedroom corner unit features beamed ceilings, a mosaic-tiled entry floor, and an elegantly paneled library and has evolved over time along with its owners. Since the Holzers moved into the staid old building in 1976, high-profile residents like acting teacher Lee Strasberg, Broadway’s Cyril (Captain Hook) Ritchard, and television personality Merv Griffin were replaced by the considerably hipper likes of John Phillips of the Mamas and the Papas, Mick Jagger and Jerry Hall, and James Taylor and Carly Simon (who was Marsia’s matron of honor at her 1975 wedding). Mia Farrow grew up in the building with her mother, actress Maureen O’Sullivan, and part of Woody Allen’s 1986 Hannah and Her Sisters was filmed here.

“It was fabulous,” says Holzer. “We had a grand old time, I can tell you. And it was such an era for music.” The Holzers entertained more than a few of their famous friends. Andy Warhol recorded the couple’s madcap Easter brunch of 1977 in his legendary diary. “That was the year of the trompe l’oeil egg hunt,” recalls Holzer. “It took me weeks to paint all the eggs, disguised in the rug patterns and so forth. You could look right at one and not know it was there. There were 26 guests, I think, and they all had a number and had to find a certain egg. André Leon Talley took forever to find his. That was such fun. We should do it again!”

Twenty years later, Holzer found herself giving up costume and fashion design and turning her talents to sculpture and furniture, and in 1998 she decided to learn how to weld. (“I had wanted to do it in art college,” she says, “but they didn’t offer it.”) Today, Marsia Holzer Studio works with top architects and interior designers creating mostly custom pieces in metal and wood. But not just any wood. Holzer uses only recycled and salvaged wood, generally from naturally uprooted trees—and she forages for a lot of it herself.

One such piece has become the cocktail table in her home office. “I pulled the wood out of a lagoon in Costa Rica,” she says. “It had the most amazing grain. It had to be hauled down the beach by oxen because the truck couldn’t get close enough.” Holzer’s affection for wood runs in her family: “My grandmother was a well-known wood carver. She and her sisters used to travel all over England carving church interiors in their long dresses.”

As for Holzer’s apartment, which dates from a time when women routinely wore dresses to the floor, it is full of her own pieces, elegantly arranged with a small palace’s worth of French antiques inherited from her husband’s family. Her co-conspirator in interior decor has long been fellow stylist and designer Nikki Nichols, who functions as a bit of an agent provocateur, suggesting ideas that the two of them implement.

a few custom projects, like the clouds painted on the foyer ceiling, the apartment remains in its original condition. “There’s not a lot of color,” says Holzer. “Most of the place is just that insanely popular Linen White.” Except for the home office, with its dark paneling and a Chinese rug in tones of blue, yellow, and green with upholstered pieces to match, and the media room, which is unmistakably . . . red. Holzer designed the red side tables and coffee tables and a pair of lamps featuring silhouettes of her and Lenny. Even the floor is covered in squares of red leather. “It’s fantastic for dancing,” Holzer attests. “You can really swing around. Everybody should have some leather on the floor for dancing.”

At an age when most people dream of retiring, Holzer is dreaming of new projects and has no interest in moving. “I love this place,” she says enthusiastically. “It’s so much more like a house than an apartment. And the location is perfect. The park is across the street, and I can walk to Lincoln Center—I adore opera. And the subway is right outside, which is the easiest way to get to my studio in Tribeca. I love getting up and going to work. I’m having so much fun!”

A version of this article appeared in the December 2013 issue of HC&G (Hamptons Cottages & Gardens) with the headline: Balancing Act.