Inside an Oceanfront Water Mill Home 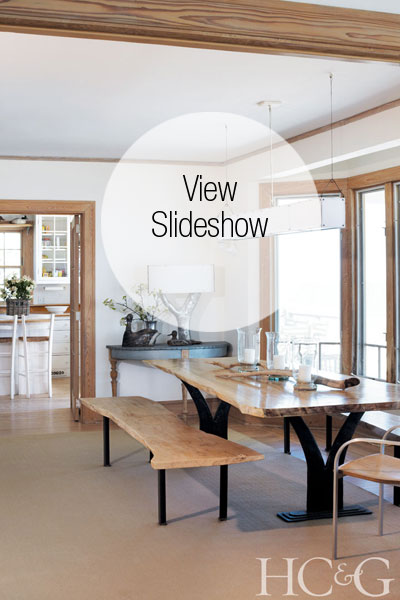 Just before Hurricane Irene descended on the East Coast last August, a policeman appeared at the door of Marsia Holzer’s Water Mill home, ordering her family to evacuate. “My husband said that we might lose the house,” Holzer says of the 1910 shingle-style oceanfront cottage, “and to take everything that meant something to me before we left.”

Her first impulse, she said, shocked Leonard Holzer, her spouse of 37 years. “I was gathering all my pieces of driftwood and shells, and he said, ‘Well, what about pictures of the kids?’ And I said, ‘I can re-do the photos. The driftwood and shells are irreplaceable!’”

The snail and conch shells, gathered from strolls along the beach directly in front of her house, are arranged in a pine cabinet bequeathed by the previous owners of the five-bedroom cottage, which also has a view of Mecox Bay, when they sold it to the Holzers in 1991. The driftwood is the bounty from Holzer’s kayaking expeditions to the Port of Missing Men on Southampton’s Cow Neck, where, with small chainsaw in hand, she collects pieces and cuts them into sections. Later, she casts them in aluminum or bronze, transmuting the once-humble driftwood into lamp bases with rock-star flash. “They’ve been described as rustic modern,” says Holzer, “but they’re too high-end to be rustic. And Shaker style is so deadly serious. I’d say they’re modern Shaker, with a sense of humor.”

These take their place alongside other Holzer-designed furnishings and accessories made from salvaged wood, such as the dining table, a huge slab fashioned from a Costa Rican tree that had fallen in a storm. Paired with matching benches, it makes for easy summer entertaining. “We have four children—one of them married—and two grandchildren, so dinner parties start with eight guests and wind up with 17,” says Holzer, petite and regal, with powerful blue eyes. “With benches, people can just slide in. We’ve had dinner parties where people’s cats and dogs sit up on the benches, too. It’s quite fun.”

Holzer certainly knows how to have a good time. The native Brit, who studied sculpture and life drawing at St. Martins College of Art in London, followed by a year at the London School of Economics, came to America three months after graduation and began designing stage costumes for famous musicians like the Rolling Stones (her first big clients, friends of a friend, for whom she made leather jackets), Elvis Presley (two rhinestone-covered suits, one in white, another in powder blue), Pink Floyd (lots of black), and Carly Simon (a plaid taffeta jumpsuit, among many designs for the singer, who was Holzer’s matron of honor in 1975).

After settling into family life and longing for new horizons, Holzer took a welding course in New York in 1998, then segued into lighting and furniture design, her work sought after by such decorators as Albert Hadley, Tom Scheerer, and Thom Filicia. In Manhattan, Holzer and her husband live on the Upper West Side. While their New York apartment is furnished with antique chests and delicate bergères, the Water Mill home is the exact opposite. “It’s a very zen-style house,” Holzer says. “It doesn’t need a lot of splashy things in it.” Underscoring the aura of simplicity are maple floors that have been mixed with white stain to give them the look of sand, “so that your eye floats from inside to outside. Every window is like a painting. The weather changes, or there’s a storm. It’s so beautiful looking out.” Even the porch railing, once a line of vertical posts, was replaced with a row of white Xs to open up the ocean view. “It’s like being a bird here. You get the feeling of flying.”

The furnishings initially consisted of pieces left behind by the home’s previous owners, wicker chairs and tables from local thrift shops, and two housewarming gifts—1930s Adirondack-style deck chairs that unhook in the back to become rocking chairs, and an antique Shaker pine table that currently stands in the front hall. The latter were given to the Holzers by Baby Jane Holzer, the Warhol superstar and Leonard’s first wife. “She’s wonderful,” Holzer says of her predecessor. “We get on really well.” (So well that the erstwhile Factory girl scored a few Warhols for the Holzers’ Manhattan apartment.) The phrase “necessity is the mother of invention” couldn’t be more apt, as Holzer has also made her own furniture and accessories whenever she finds the need for them, including a hutch-like desk for her husband and a headboard of Juana Costa wood, which came from a tree rescued in a Costa Rican lagoon.

On the bay side of the house, Holzer has planted a lovely herb and cutting garden and installed a lap pool with a pale gray basin. “It picks up the light similarly to the bay,” says Holzer, “and doesn’t look like Hockney came to visit for the weekend.” The garden, pool, cooking, bicycle riding, and endless hunting for driftwood keep her busy most weekends—especially the pursuit of driftwood. Visitors, be forewarned: Do not mistake the pile of artfully arranged pieces by the fireplace for kindling. “That’s my display driftwood!” Holzer exclaims, adding: “It’s the sort of stuff you take when there’s a hurricane coming.”

A version of this article appeared in the July 1 2012 issue of HC&G (Hamptons & Gardens) with the headline: Hamptons Classic.