Inside an Updated Connecticut Colonial 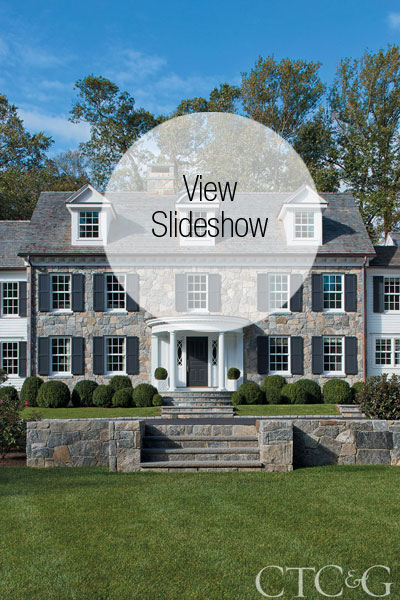 When the owners of a dated 1950s Colonial in Tokeneke decided it was time to build their dream home, they had plenty of ideas about how they wanted it to look, feel and flow; they had been cutting images out of magazines and creating pages devoted to everything from room layouts and flooring to lighting and fabrics.

“They had a great vision of what they wanted their house to be,” says Dan Conlon, the owner of Georgetown-based Daniel Conlon Architects, who spearheaded the project. “A big part of what we did was to synthesize the collection of images into a plan that worked for a young family.”

That vision entailed a classic Connecticut Colonial that combined traditional and modern elements, a five-bedroom house that was sophisticated yet casual enough for an active family. At first there was talk of starting from scratch. “It justified a teardown,” says Conlon. “But I’d always rather renovate when given a chance. The goal was to make it look like a home from the 1940s, which was a really great period.”

Located on a beautiful corner lot, the house had a garage that opened onto a side street. “The sight lines were terrible,” says Conlon, “and it was impossible to get in and out safely.” The first order of business was to turn the garage into a family room and attach a new three-car garage to the house with a mudroom. By reconfiguring the driveway, Conlon created “a graceful entry to the property and a safe play area for the couple’s four children.”

Next, a two-story addition provided space for the ground-floor library and home office, plus the second-floor master dressing room and closets. The pitch of the roof was increased and dormers added to accommodate a third-floor guest suite. Because of zoning constraints, the ceiling heights on the first and second floors had to stay just under eight feet—low by today’s standards. “But we liked the original proportions of the rooms,” says Conlon. He used custom millwork, moldings and lighting to create the illusion of height. “The details are meant to be elegant and crisp but not over the top,” he notes.

The kitchen was expanded to incorporate a breakfast nook, which opens into the family room on one side and the dining room on the other. The playroom was moved from the basement to above the garage. There are two covered porches, plus a mudroom with cubbies and drawers for the entire family, even a separate walk-in hockey closet. “The dad and kids play,” says Conlon. “The wife is so happy there is someplace to store the gear.”

For the interiors, designer Ashley Dortch of HB Home’s Westport design studio (additional locations in Greenwich, NYC and Long Island) suggested a transitional approach that would incorporate pops of color with the couple’s traditional style. “People are afraid of color,” she says. “By layering and using neutrals, it’s not as scary. It’s a terrific way to make things fresh and modern.”

Case in point: The modest entry foyer, where a custom-carved chest in fern green holds center stage. “It sets the tone for the whole house,” says Dortch. “It’s fun, casual and very current but also sophisticated. It says we love color and we’re not afraid to show it.”

That is certainly true in the kitchen, where the rectangular island is painted turquoise. “It grounds the white,” notes Dortch. With a glass backsplash that has a tinge of blue and sparkly white “disco balls” overhead, “it really feels like a jewel box.”

The adjacent family room has enough seating for a movie-night crowd including a big sectional, a pair of vinyl-covered ottomans and a lacquered vinyl coffee table. The couple’s most prized possession—a landscape painting by a local artist bought when they first moved to Darien—hangs in the spot over the sofa; it inspired the room’s blue and lime green palette.

The tone is more subdued in the master bedroom, where a traditional four-poster and sisal rug gave way to an upholstered headboard, a geometric pattern area rug, Lucite lamps, white night stands and pale gray walls. “It’s the perfect retreat for a busy mom,” Dortch says. At the opposite end of the spectrum, the kid’s playroom is a fanciful light-filled hideaway, sporting a vibrant mix of colors in a variety of functional fabrics. “We just wanted it to be whimsical and fun,” says Dortch.

As for the hockey closet off the mudoom: “The only thing I had to say about that: Does it have a fan?”

A version of this article appeared in the May 2012 issue of CTC&G (Connecticut Cottages & Gardens) with the headline: Room to Grow.