Inside an Updated Georgian Château in Greenwich 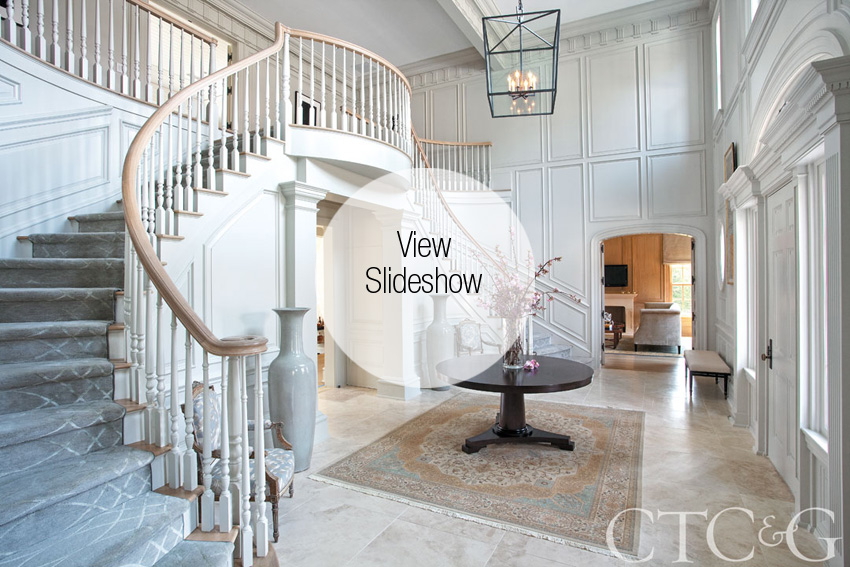 "It’s the first impression and the last impression that people remember about a home," says interior designer Karen Howes, founder of the London-based firm Taylor Howes, who made the entry (and everything else) in a Georgian-style Greenwich residence memorable. From the soft gray paneling that encases the elegant double-sided staircase to the matching French Bergère chairs topped with embroidered linen, there’s a feeling of grandeur in the home’s opening statement that in Howes’s words is “very French petite-château.”

But it wasn’t always so. When the 40-something couple with two young sons purchased the new 13,000-square-foot residence after a stint in London (Howes designed their British digs), the builder-grade finishes were too ho hum and the layout was not to their liking. “They were attracted to the location and overall style of the house, but they wanted the spaces customized to better suit their taste and needs as a family,” says developer/builder Mark Mariani. He worked with Howes on an extensive overhaul that started with opening up a series of small rooms to create a pair of commodious bedrooms for the boys and expansive master-bedroom quarters that rival the finest hotel presidential suite.

Next Howes stripped the existing kitchen and introduced modern white cabinets and durable reconstituted glass countertops. “The homeowner likes elegance and glamour. But with two boys, she also appreciates practicality, and we designed the kitchen accordingly,” says the designer, who included a fully functioning butler’s pantry for catered affairs.

Despite overtures to the sensible, at the end of the day, sophistication and luxury ruled. In the adults-only living room, damask wallpaper, custom silk mohair sofas, and a pair of silk stools with a button detail are chic without being fussy. “It’s formal but not ornate,” says Howes, noting the lack of fringe and tassels. “We also knocked back the standard oak floors a few shades with a white oiled finish to make the floors more muted like the grand homes in France.”

In the overscaled master suite, the his and hers dressing areas include a separate weekday dressing room for him. “Who wants to be reminded of the weekend when you’re putting on a suit and tie?” says Howes. And there’s enough open shelving in hers to spy 150 pairs of shoes at a glance.

The sleeping quarters boast a contemporary take on the four-poster bed backed by 12 panels upholstered in a cherry-blossom fabric hand-embroidered in China. “During the Regency period in England, every house would have an element of chinoiserie,” says the designer, who didn’t hesitate to mix periods here and throughout the house. “To get away with combining furnishings from different time periods, you need something that ties things together.
In this case, it’s the palette of soft grays, blues and taupes.”

Also contributing to the flow is the use of symmetry. “It provides a feeling of harmony,” says Howes, who placed a pair of oversized glazed ceramic vases in the entry, meticulously matched lamps and end tables in the living room, and punctuated the formal dining room with a set of silver leaf front cabinets that provide order, along with an unexpected touch of sparkle. The latter also features a large wood table that’s “English in tone and manner,” and an Italian lighting fixture topped with silk shades to soften the light. It’s this graceful melding of styles that embodies Howes’s design philosophy.

“People are so multicultural, they don’t want to live in one prescribed way anymore,” she says. “In the great historic homes of Europe, the owners traveled extensively and brought back things from everywhere and just placed them throughout the house. And it worked. We tried to convey some of that same idea here.”

A version of this article appeared in the September 2012 issue of CTC&G (Connecticut Cottages & Gardens) with the headline: British Import.