Inside an Urban Villa at Lily Pond 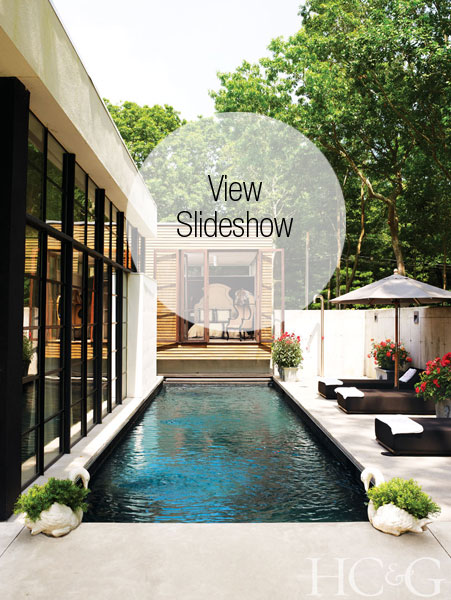 Designer Pol Theis has a special affinity for the forest. So he was thrilled when he found a parcel of land on a wooded lot that backs onto a protected wetland known as Lily Pond. Located between Sag Harbor Village and Bridgehampton, Theis’s new 4,500-square-foot getaway has roots in the Bauhaus and California modernism, with a nod to Pierre Chareau’s famed Maison de Verre (“House of Glass”) in Paris. He likes to think of it as a combination of “country loft and urban villa.”

Theis, who is a native of Luxembourg, has no formal training, just an avid appreciation for architecture and design. It wasn’t until he had spent nine years as a corporate attorney in Paris that he decided he couldn’t repress his creative side any longer. In 2004, he made a series of moves as bold as his design style. He quit his job, relocated to Manhattan, and opened his own firm, P&T Interiors. He collaborated on the house’s design with architect Thomas Warnke, who shares many of his aesthetic sensibilities.

The compound consists of two main volumes: a glass-enclosed square with an open-plan living room, dining area, and kitchen, and a rectangular wing containing two identical master suites bracketing twin guest rooms, which can all be accessed through an interior corridor or via separate entrances from outside. There is a bathroom between each master and guest room, and all the rooms can be opened in an enfilade or closed for privacy with pocket doors.

While the glass-walled public rooms are almost entirely open to the landscape, the bedrooms are completely contained. The only windows lie along the ceiling level, though they wrap around the entire wing, which is clad in horizontal slats of cumura, a Brazilian teak. Theis had French doors installed in his master suite, so he can dive into the saltwater lap pool that lies directly below.

The house also includes a full basement, which allowed Theis to sink the bathtubs and to install televisions that retract into the floor. “I hate seeing big black boxes on walls when the television is not on,” he says. In the bedrooms and baths, the flooring is a warming wood: seven-inch-wide planks of bleached white oak. They go beautifully with the polished concrete slabs that line both the patios and courtyards and the main living area, with its dramatic steel-mullioned windows, custom made in London to accommodate 14-foot-ceilings.

The interiors balance lots of white with lots of high-contrast black as a dramatic accent, forming the backdrop for an elegant assortment of furniture designed or collected by Theis in natural materials like wool, cashmere, linen, silk, and leather. And art. “I always incorporate art into my designs,” says Theis, who has created his own memorable installations of quirky flea-market finds.

The designer is a perennial denizen of the marchés of Paris, particularly the enormous venue at Clignancourt known as les puces. Wherever he travels, he first stops at the indoor or outdoor resale markets. Among his passions are taxidermy, vintage galvanized containers, wood carvings from Germany’s Black Forest, and sculptural animals ranging from swans and flamingos to dogs and pigs. (“They help break down the dichotomy of indoors and out,” he says.)

But his greatest passion seems to be his collection of dolls. “I went to the flea market one day, and someone was selling an enormous lot of old worn-out baby dolls,” he recalls. “There must have been 600 or 700 of them. I bought them all.” Since that milestone purchase, the dolls have turned up in his designs, usually in multiples, sometimes displayed on shelves—as in his own kitchen—or in vintage buckets, jars, or any other unusual container he can find.

Theis has named his house 31 Pigeons, after the extraordinary installation that hangs from the living room ceiling: a flock of the birds that serves as a light fixture. He designed it with London-based artist Alex Randall. “It was a major installation,” he says, “because they’re all in flight. I wanted it to look like they’re trying to fly out the front door.” The same room includes a large, and deceptive, teddy bear, a sculpture by Canadian artist Ross Bonfanti, who has done an entire series of “Concreatures” made from concrete and plush toys.

“It’s a very comfortable house,” says Theis, “and I love the exposure to nature. New York is a tough city, and while I do a lot of traveling, it is only for business, not for vacation. So I really need to come out here to relax and to spend quality time with family and friends. Adults like the privacy of the bedrooms and the separate entrances, and kids like running around in all the passages and the various openings. When I have house guests I always make dinner reservations at a restaurant, but most of the time we wind up eating here instead because people find it so comfortable that they don’t want to leave. I find that a great compliment.”

A version of this article appeared in the September/October 2013 issue of HC&G (Hamptons Cottages & Gardens) with the headline: Pol's Pad.