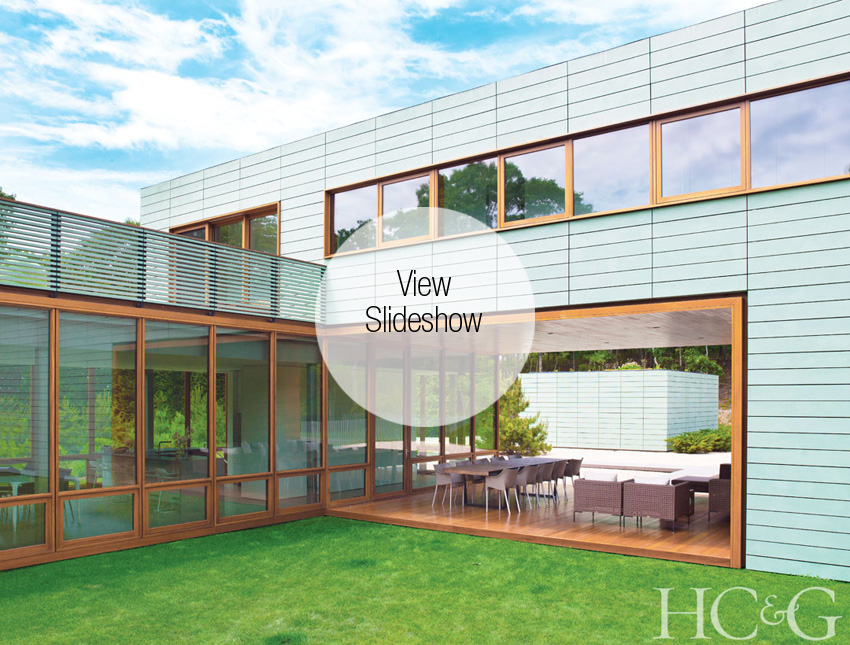 In the architecture world, long gone are brash figures like the mercurial, iconoclastic Howard Roark or the clunkily monikered “starchitects” of the go-go 1980s. Today’s architects, dare it be said, are practically mere mortals. Take Roger Ferris, very much a humanist at heart. Before he sets pencil to paper, the New York–, Connecticut-, and Hamptons-based architect begins each project by creating fictional short stories about the people who will inhabit his buildings. “I imagine what the clients are like and how they will use a space,” says Ferris. “I use fiction as a way to describe that space with main plots and subplots.” When he was designing the East End Hospice in Westhampton Beach, for example, Ferris spoke with dying patients and discovered their desire to be outside, so he allowed for doors that would be wide enough to accommodate beds that could be wheeled out to a deck overlooking a pond. Whatever the project, clients always drive Ferris’s narrative.

A Loeb Fellow and graduate of Harvard University’s Graduate School of Design, Ferris applies this end-user approach to his residential, commercial, and hotel and restaurant projects, such as the Topping Rose House in Bridgehampton (he both renovated its historic main building and designed its modern addition) and the forthcoming new library at Robert Wilson’s Watermill Center. His firm, Roger Ferris and Partners, has won more than 70 regional and national awards and international citations.

Locally, Ferris is best known for his collaboration with financier Robert M. Rubin on the Bridge golf course in Bridgehampton, inventing a thoroughly modern clubhouse that has gained worldwide attention. (Although both Ferris and Rubin are avid golfers, neither played the game at the project’s inception.) Perched on the highest point on the East End, with fabulous views of Peconic Bay, the course and clubhouse sit on land that was once home to the Bridgehampton Race Circuit, a racetrack that closed in 1998. Vintage signage, such as the Mobil Oil Pegasus, and modern sculpture line the steep, sinuous drive to the clubhouse, which also contains contemporary works by such artists as Richard Prince, a club member, and has no formal dress code and very little in the way of old-boys’-network convention. (Rubin also owns the circa-1930 Maison de Verre, Pierre Chareau’s groundbreaking glass house, in Paris’s 7th Arrondissement.)

The next chapter in the Bridge’s story is a series of 800-square-foot guesthouses peppered among the golf course and 15 building lots featuring energy-efficient, low-impact contemporary homes. Ferris has just completed the first one, called the Green House, a 2,500-square-foot, LEED-certified gem that he uses as his Hamptons getaway. “Bob [Rubin] and I wanted to experiment with a house that was small in scale, yet had all the accoutrements of a larger house,” says Ferris, who named the home for both its energy-sensitive design and the color of its Swiss Pearl siding, a cement composite that “will last forever. We wanted it to be as easy to maintain as possible.”

The house comprises two simple stacked forms perpendicular to each other—one entirely of glass, containing the airy public areas on the ground floor; the other more enclosed, accommodating bedrooms and baths on the second floor. A semi-detached space under the master bedroom serves as a hybrid guesthouse/pool house/office, while a roof terrace provides expansive communal space and collects rainwater for irrigation. An outdoor veranda links the major components together and acts as the home’s heart. The cubelike garage, in the same dimensions of the veranda, stands apart, as if it were a puzzle piece that Ferris gingerly teased out of the house in order to create the alfresco lounge area. “You can see how the garage form could slide up and fill the void of the open entryway,” he notes.

Ferris says his exploration of “geometric forms that are linked and become different things” was inspired by both minimalist artist Donald Judd and Philip Johnson’s Wylie House in New Canaan, Connecticut, which the architect was restoring at the time of the Green House’s genesis. He actively avoids what he calls architectural one-liners, houses that are “legible from a distance, but with nothing more to experience.” He aims to create interest from a distance, close-up, and within.

For the grounds, Rubin’s wife, landscape designer Stéphane Samuel, devised a scheme that “is integral to the way the house was designed,” says Ferris, noting that the views are just as compelling in summer as in winter, when the barren trees become sculptural in the snow. “Originally, I didn’t design the house with myself in mind—it was just an experimental idea. But at the same time, I can’t help but imagine myself in any house I design.”

Ferris was also deeply involved with the decor. “I like to be part of the dialogue,” he says. “Architecture is all-inclusive.” Not surprisingly, the open living room and dining area features an impeccably curated assemblage of modern standouts from vendors and designers such as Moroso, Edra, Hans Wegner, and Zanotta. His pared-down art collection leans heavily toward contemporary photography, including a stunning image of Niagara Falls in the master bedroom, which has a smart counterpart elsewhere in the house in the form of photographer Alec Soth’s plain-spoken images of the region and people who live near the falls. These underscore Ferris’s interest in the interplay between macro and micro storytelling.

One thing goes without saying: With all the open spaces and clean lines, this is no house for clutter. “I’m definitely not into tchotchkes,” Ferris says with a laugh. Even so, with four children ranging in age from six to 16, “it doesn’t ruin it for me to have newspapers on the floor and the dog running around and the kids playing. I think of the house as a living machine.”

A version of this article appeared in the August 15, 2016 issue of HC&G (Hamptons Cottages & Gardens) with the headline: Green Machine.