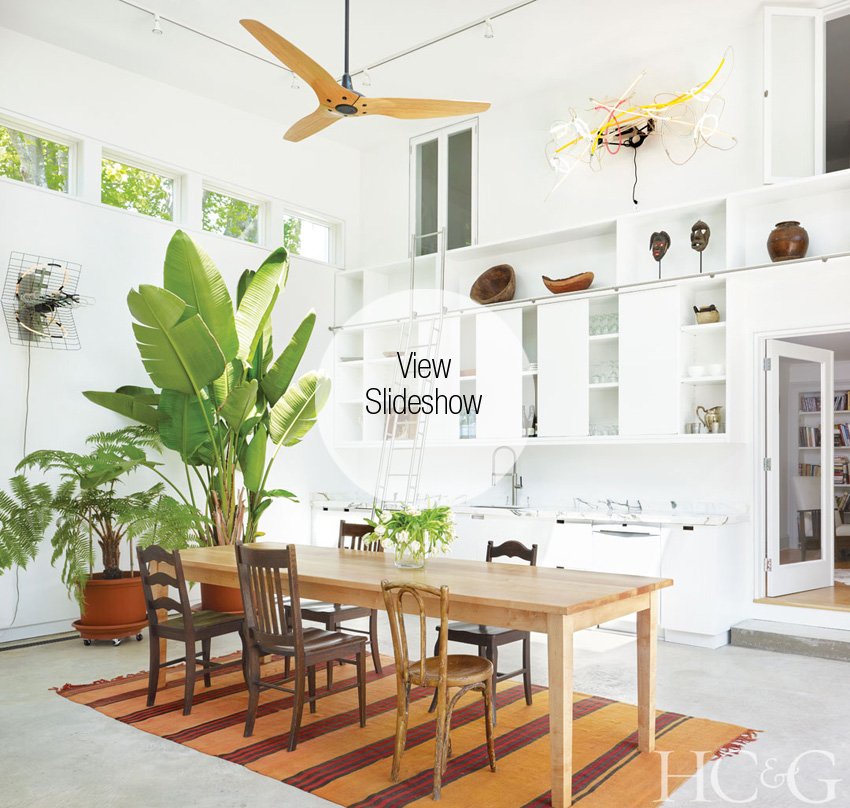 Artist Keith Sonnier is perhaps best known for his crisp, cutting-edge neon sculptures, but those with a more knowing eye can also praise him for the precision-cut stands of bamboo that lie on the grounds of his Bridgehampton home and studio. Set back from a street known for speeders, his recently revamped compound fully embraces the environment that surrounds it. “The nature here is inspirational,” says Sonnier, whose work is included in major museums and collections worldwide, such as the Centre Georges Pompidou and the Whitney Museum of American Art. “It reminds me of growing up as a kid in Louisiana. I hope we don’t destroy it.”

Situated on nearly two acres, Sonnier’s white Victorian farmhouse has been both simplified—walls removed, a kitchen updated with rough-textured bluestone counters—and opened up, primarily via an addition that includes an informal dining area–cum-orangerie and a master suite. Some rooms in the original structure, while still small in scale, suddenly seem commodious, welcome display cases for Sonnier’s neon sculptures, whereas the pièce de résistance is the new double-height dining area and library/office, featuring a wall of glass opening to the pool, a hand-crafted, extra-long maple dining table, ample counters and cabinets that make indoor and outdoor entertaining easier, and expanses of books packed onto gleaming shelves. “I’m delighted to have my books out again,” Sonnier remarks, with the look of someone who has been meaning to renovate for years.

Sonnier has also built himself a multipurpose studio with 25-foot ceilings, which he currently uses for storage, private exhibition space, and a photo studio. Here one might find a piece that has come back from a collector for conservation, or wall sculptures made of plaster and dressmaker’s satin from the artist’s early period in New York. (The prolific Sonnier started showing at Leo Castelli in 1970.) He already keeps a separate studio elsewhere in Bridgehampton, although the new space might eventually become command central for his neon pieces. An extra bonus: a garage door that accommodates large works, which he typically transports in his pickup truck. “I couldn’t live with my work in such proximity before the renovation,” says Sonnier, who will be mounting a major solo show at the Parrish Art Museum in 2018. “Now I can live with a body of work for a year, if I wish, before it goes off to a museum or gallery.”

Throughout the house—on walls, ceilings, and floors—are Sonnier’s signature neon sculptures, simply plugged into wall sockets. These pieces, he explains, grew out of his youth in Mamou, Louisiana, where he learned about working with electricity from his father, who owned the local hardware store. Sonnier recalls driving home after late nights out and seeing the eerie glow of neon lights emanating from roadhouses, and he has been fascinated by combining technology with nature ever since.

Sonnier’s own work isn’t all that’s on view. A devoted collector, his taste runs the gamut from Neolithic stones to African masks and shields (he taught African art during graduate school at Rutgers). Here and there are brilliantly colored rugs that he designed and had produced in Oaxaca, Mexico. And he jokes that “nobody wanted” the master bath’s highly veined marble from Bridgehampton Stone & Mosaic, which gets its own natural accent in the form of a large staghorn fern.

Although Sonnier has kept a hawk’s eye on his property’s well-tended bamboo, an enormous tulip tree—the reason he purchased the home in the first place—towers over all. I bought my house in 1988, when [my daughter] Olympia was born,” he recalls. “I loved the tree from the very start, and I thought, I’ll never afford this, but shortly after, my French dealer bought some pieces, and that was my down payment.” His interest in trees has crept into pieces that incorporate un-planed cedar, a revered material used to make toko-bashira posts, which are ubiquitous in traditional Japanese house construction. According to Sonnier, the calligraphic Japanese character for home and tree are quite similar.

Sonnier’s interest in Japanese culture led to the choice of bamboo as a hedging material, and now the rear of the property is following suit. The pool surround, a minimalist study in cement, cedar decking, and large rough-hewn stones scattered about the perimeter, can almost be read as a Japanese folding screen. Between the house and studio, paulownias and self-seeded Japanese maples—many artfully transplanted—dot the land, culminating in the new studio. The sculptural lines of the potentially imposing structure fit nicely into the landscape, where recently Sonnier was pleased to see an eagle fly across the sky.

A version of this article appeared in the July 1, 2016 issue of HC&G (Hamptons Cottages & Gardens) with the headline: An Artist and His Brand New Studio.