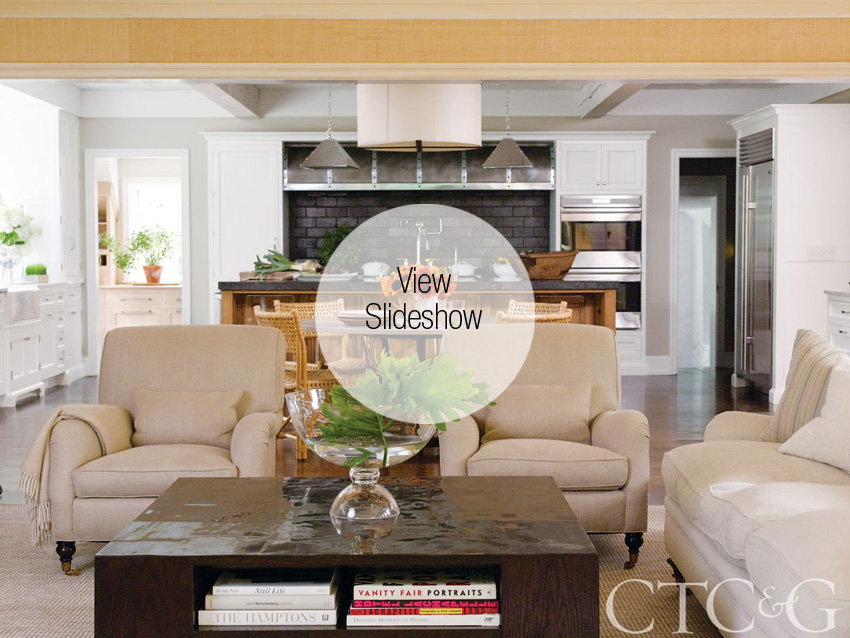 Five years ago, when Greenwich-based designer Alicia Orrick executed a one-day makeover on the living room of a 1927 home in New Canaan, the clients’ response was best summed up by the reaction of their nine-year-old twin boys: “They walked in the door after school and screamed, ‘Cool!’” recalls Orrick. The room, with its off-center fireplace and “about 30 chairs” that were rarely used, was more of a passageway than a gathering spot. “I had tried a thousand different ways to make it work,” the wife says. “Alicia came in and fixed it in a day.”

She and her husband were so pleased that when it came time to update the rest of the six-bedroom stone house a few years later, they knew where to turn. Designed by architect Cameron Clark, the home was big enough for their growing family, but the couple wanted something that better suited their lifestyle. “When we moved in, we were coming from an apartment in New York City and the house seemed huge,” she says. “I didn’t quite yet understand what it would be like to have three large boys.”

The biggest problem was the layout—the outdated kitchen was cut off from the family room, the laundry room led to a powder room, which opened into another little room that, in turn, led to the formal dining room. And there were three bars and two pantries. The challenge was to find a way to maximize the existing space without losing all of the charming touches that drew the homeowners in the first place. “It’s one of the prettiest homes in terms of details, proportions and use of materials,” says Orrick.

First up: the twins’ dormered bedrooms, each of which was just big enough for a bed and a dresser. Orrick designed built-ins and bookcases for storage and kept the palette neutral in each. The boys got to weigh in on the décor. “They had strong opinions,” says Orrick. Accessories in one room include a map of Africa and a rug from Morocco; in the other, a cow skull and sheepskin rug. In the shared space that connects the two, the wall is covered with a map of the world. “The boys love to travel,” she says. “They put pins in all the places they’ve been and all the places they want to go. Needless to say, it’s pretty much covered.”

For the downstairs, Orrick teamed up with kitchen and design specialist Lindy Weaver. To achieve one of the family’s goals—to eat together as a family in the kitchen—the kitchen was gutted and the laundry room was moved to the lower level, freeing up additional space. The end result is bright and airy, with polished oak floors, white-washed beamed ceilings and custom cabinetry with a nifty interior lighting system. “It’s great if you’re doing a midnight run for Oreos and you don’t want anyone else to know,” Weaver says.

The kitchen now opens up directly into the family room, with its vaulted ceilings and cozy seating areas. Orrick re-covered the existing furniture, added a burlap grass cloth to the walls and changed the window treatments. “It was a very bold pattern before and now it’s soothing,” she says. “I loved creating that tranquil background.”

A spacious mudroom features cabinets that are crafted from durable grain-relieved white oak, and a wall with a double row of pegs for hats and jackets. Orrick lightened up the dining room by replacing the chocolate brown curtains and bench upholstery and painting the trim a bright white. The adjacent sunroom, where the family loves to entertain, has antique-brick floors. The designer moved a pair of antique Italian frescoes from the living room and placed them on either side of a painted cabinet, which came from the kitchen. “For the most part, we used pieces from other parts of the house that were in the wrong place,” she says.

As for the funky little space next to the dining room? It’s now a beautiful wine room that echoes the feeling of the sunroom with its brick walls, slate floors and a chandelier that was made from an 1890 French garden cloche. “We have friends who come for dinner and insist the room was always there,” laughs the homeowner.

A version of this article appeared in the April 2013 issue of CTC&G (Connecticut Cottages & Gardens) with the headline: Makeover Magic.