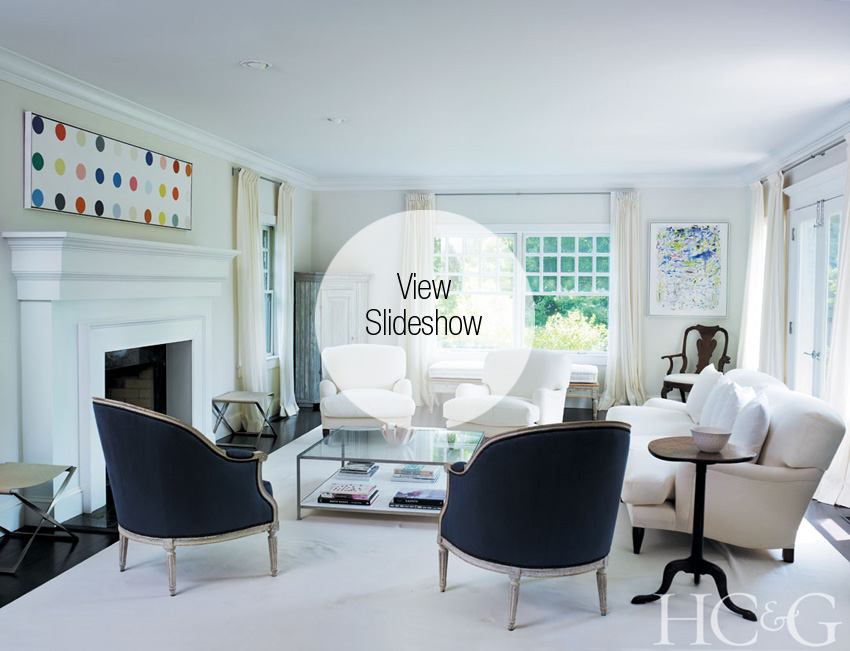 Nothing shouts “Famous fashion designer lives here!” at the edge of Jill Stuart’s gravel driveway in Sagaponack. There is no sign with a cutesy house name, no security placard. In fact, nothing about Stuart’s house shouts look-at-me! at all. There is only a quiet respect for the place she loves so much, the peace and beauty of her Hamptons house and garden.

It makes sense for someone trying to “escape from the crazy world of fashion,” says Stuart, whose eponymous label is nearly 20 years old, a rare success story in a notoriously difficult business. Stuart recharges here, spending time with her three daughters, going to the beach in the late afternoon, and barbecuing and sitting by the fire pit at night. (On the rare occasions when she tires of all the quiet, she cruises around in her 1966 Mercedes convertible, blasting Pink Floyd and Bob Dylan—but that’s another story.)

With an unsurprisingly seasoned eye for home accessories, she also likes to scout for finds at Hamptons treasure troves like Ruby Beets, R. E. Steele Antiques, and the East Hampton Historical Society’s annual antiques show at Mulford Farm. The result: tasteful rooms marked by a carefully edited selection of everything from white McCoy vases to beautifully subtle Swedish seating pieces to painted wood mirrors. “I don’t like things junked up,” she says matter-of-factly.

Indeed, the interiors are more like a calm, neutral canvas. Benjamin Moore Super White walls and chalk-white cotton drapes embrace the Long Island light that gives Stuart a feeling of tranquillity. She favors the simplicity and colors of Scandinavian design, which explains the occasional pale blue or green Gustavian side table or chest of drawers that catch the eye and go so well with deep sofas upholstered in heavy cotton muslin.

The spare aesthetic is also intended to complement her collection of works by artists who share her love of the Hamptons. Just as her fashion collections often feature floral prints in tones of blues and shades of lavenders and pinks, the artworks underscore her passion for nature and color. In a corner of the living room, a Robert Harms abstract painting, Late Summer, captures the East End’s famous light, playing off a polka-dot canvas by Damien Hirst above the fireplace. A floral-motif acrylic silkscreen and fabric collage by Donald Baechler welcomes visitors in the foyer. Her guest rooms feature poppies painted by local artists Donald Sultan and Robert Jakob. “Long Island has such a history of incredible painters,” Stuart says, “and I wanted to display works by artists who reflect the Hamptons light in their paintings.”

Crisp accents of black and white smartly punctuate the pops of color, from the foyer’s checkerboard floor to the carved ebony four-poster bed and dark-stained floor in the master bedroom. Even the garage has graphic oomph: With glass doors and a silver-painted floor, it was designed by her husband, Ron Curtis, to house their cars, including a black Bentley and Ferrari. Curtis, a film producer and the CEO of Jill Stuart, lined the walls of the garage with more artwork for a playful finishing touch: advertising posters from Stuart’s fashion campaigns, featuring models and actresses like Lindsay Lohan. They provide unexpected contrast to Stuart’s cream-colored Mercedes, which sits next to her husband’s 1971 black Mercedes sedan. “They’re lovers,” she says of the cars. “Like an Oreo!”

A seasoned traveler, Stuart has also filled the house with her finds from around the world, including a colorful vase from a harem room in Turkey, which now greets visitors in the entry (guest bathrooms are stocked with Turkish robes); a Balinese embroidered tapestry; a Moroccan inlaid mother-of-pearl dresser; and an Australian surfboard painted with butterflies, which she brought back on the plane. Her passion for Scandinavian furniture has even prompted her to plan a trip to Sweden this fall, just after the Première Vision fabric show in Paris. “Traveling is so important,” she says. “Experiencing new cultures, meeting new people. I love all my memories from my trips.” But nothing beats time spent at home in Sagaponack.

A version of this article appeared in the September/October 2012 issue of HC&G (Hamptons Cottages & Gardens) with the headline: Stylish Sanctuary.